Some of us, those who focus more on sovereign debt markets, probably participated. The rest of us watched. The positive vibes emitted by the events of this past weekend had worn thin by Monday afternoon. Oh, a 90-day cooling period that lent some rest to what had been rising trade tensions between the planet's two largest economies is nice. Don't get me wrong, but what got us to the brink is still in place. The only potential reversal was a vague pledge made by the Chinese to purchase more U.S. goods, particularly of the agricultural variety, in order to reduce the headline trade imbalance between the two nations.

When I was a young lad at some point in the late 1960s or early 1970s, my parents bought for me a cheap toy known as a Colorforms set. They also bought Colorforms for my sister. Colorforms, for those who were actually born yesterday, were flat vinyl shapes that would cling to a smooth background without adhesive. You could move them around and change the scenes. We thought they were cool. My set was the much-envied "Planet of the Apes" edition. Good enough to occupy this simple mind in a much simpler era.

On Monday evening, I thought of my Colorforms set for the first time in nearly 50 years. Traders showed some appetite for the long end of the curve. Ten-year U.S. Treasury notes soared to yields in the 2.95% neighborhood. Flat? Flatter than a pancake. As flat as, well... Colorforms.

Proof in the Pudding

Still need proof that the Federal Reserve had gone too far with its aggressive manipulation of the short end? We all know that an inverted yield curve often can be seen as a harbinger of economic recession and all of the pain associated with it. This morning as I stare out my blackened window into the nothingness of suburban America, most of the citizens of my street have no idea that the spread between the U.S. two-year note and the U.S. 10-year note has withered to a mere 14 basis points. They surely do not know that the U.S. two-year and the U.S. five-year already have inverted. That particular spread stands at a negative 0.8 basis point as I bang out this missive, the first 2/5 inversion since 2009. Oh joy, good times.

The 2/10 spread is now at 11-year lows, by the way. Typically, should that spread invert, the economy has some time before an actual contraction in economic growth takes place. Then again, in this electronic age, when kids don't occupy themselves by placing vinyl figures on a smooth cardboard background, situations evolve much faster.

Some say that this 90-day window of truce on trade increases uncertainty. Well, sport, life is uncertain. Would you rather that Presidents Trump and Xi had both walked away in dissatisfaction this weekend? China is slowing. There is no way to sugarcoat that. The rest of the planet is fairly (understatement) messy as well. Domestically, fiscal policy has been perhaps recklessly loose. Does a spiraling deficit like this force the long end of the curve out to where the slope appears healthy, or does the bear grip Wall Street, and this then forces the central bank to reverse course on balance sheet normalization?

The U.S. economy is not gripped with problematic inflation and equities at this time are not grossly overvalued, in my educated opinion. There are, however, two overt issues pressing on my brain in addition to the behavior of the slope of the yield curve.

First: The central bank has been too aggressive. I think its members now understand this. They should have listened. They did not. Still, moving ahead with that December rate hike may be the straw that does break the camel's back, unless the 2/10 gap broadens significantly within two weeks' time.

Second: Domestic economic growth is certainly threatening to slow without the benefit of ever-increased artificial stimulation.

As much as it pains this Austrian-style thinker to say, if the Treasury Department is ever going to issue a large series of 100-year bonds, I believe there will at this point -- ahead of obvious withering of several key data points -- be enough global demand to perhaps keep the cost of borrowing over that time frame manageable for the federal government while not forcing the central bank to severely and detrimentally impact its own balance sheet. Responsible? Nope. It forces a terrible burden on still-unborn generations. But that has never stopped anyone before.

In Monday's Recon, we discussed RH (RH) , formerly known as Restoration Hardware, and the fact that the company had moved its earnings release up to Monday evening in response to financial markets closing on Wednesday as the nation mourns the passing of President George H.W. Bush. Long story short.... RH hit the ball out of the park last night. The stock is up nearly 20% from last night's closing price, which itself was up 6.5% from Friday;s close.

Less closely followed on Monday night were the third-quarter results offered up by Coupa Software Inc. (COUP) . Coupa who? Her name was Lola? This company, for those not in the know, provides a cloud-based budget-balancing software platform for business. Need to control spending as a manager? These are the guys Jim Cramer has referred to as one of his "Cloud Princes," so while not exactly a household name, Coupa is also not exactly coming out of nowhere.

Coupa put to the tape a non-GAAP surprise profit Monday night of $0.08 a share. That EPS number beat expectations by 11 cents. Revenue also pleasantly surprised. That number hit the tape at $67.46 million, a beat of nearly $5 million, and was up 42.5% year over year. Most of the beat was provided by Subscription Services, which provide not only regularly recurring cash flow moving forward but also comprises by a wide margin the lion's share of Coupa's business. For the current quarter, Coupa is guiding toward both EPS and revenue well above consensus analyst views. The stock is now off more than 3% in overnight trading, but that is in response to a 6.8% move to the upside on Monday. Profit taking does make sense. Down below, you'll see why. 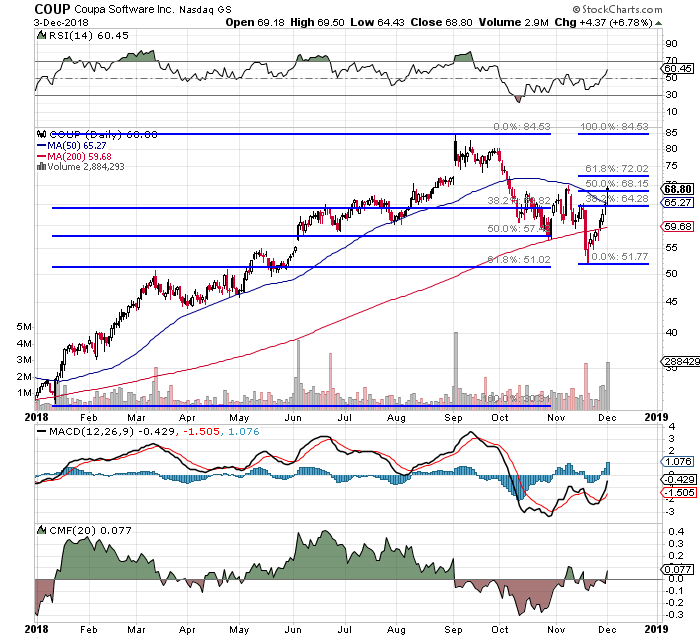 One thing that concerns me about this year-to-date chart is the recent series of lower lows that Coupa has experienced since the broad equity market meltdown began in early October. However, there are distinct positives. Relative Strength, Money Flow, and the daily MACD (moving average convergence divergence) crossover, for three.

A pattern I see that suggests algorithmic control over the name is that support in both late October and early November, as well as the Monday high, all came at very close to precise Fibonacci retracement levels at overtly obvious points on the chart. That Monday high also presents as a double top. Often seen as bearish, this double top may be close enough on the timeline to be seen as part of the same recovery, in my humble opinion. Still, I am cautious.

Am I interested in COUP? Sure, even with enough exposure to the cloud in place. Not enough, though, to pay anything close to what could be the start of a bearish formation. I could be wrong, but why put oneself in that position from a risk/reward perspective? Where am I interested? Seems deep, but the 200-day simple moving average (SMA) lives in the $59.70 area and there is possible extended support around $57.50. Are those prices possible? This name reports again in early March. Keep that in mind.

Purchase 100 shares of COUP while writing a March $75 call against the shares. With the stock moving and options markets still un-open, it becomes difficult to price this out for you, but my thought is that the call brings in a premium close to five bucks, reducing net basis by that much.

Now, an aggressive trader could also sell short a $60 March put, probably for another four bucks or so. If the shares never get that low, the trader now has a net basis that is nine dollars or so below the price where the equity was actually purchased. Should the shares collapse into St. Patrick's Day, the trader will then be long 200 shares, but still at a net basis that looks good on the chart today. The fact that it's St. Patrick's Day would just be a bonus.

Get an email alert each time I write an article for Real Money. Click the "+Follow" next to my byline to this article.
TAGS: Economy | Federal Reserve | Fixed income | Investing | Treasury Bonds | Software & Services

Plus, a look at rising mortgage rates and why SoFi Technologies is a stock for which I continue to hold out hope.

The Fix Is Not In: Why You Should Avoid These Investments

Every year you see investment publications pushing fixed-income products. Here's the risk with those.

The Case for FOMO Is Fading -- Rapidly

I am extremely nervous about any asset that has benefited from TINA or FOMO.

The central bank dropped a hawkish bomb in the press release that I don't think many were expecting. Here are my thoughts on what was said and what comes next.

Was this a good report or a bad one?