There are a few reasons why interest rates fall -- the primary one is a lack of inflation, or even a deflationary condition. We witnessed this not long ago on a couple of occasions, as you see in the attached chart.

That seemed to work fine, but now the world is awash in debt, with the can continually kicked down the road. At some point, the many trillions of dollars will have the be dealt with, but for now the bandaids are still fresh.

Back to interest rates. Recently, the 10-year bond hit a multi-year high of 3.25%, scaring everyone out there, who feared inflation was starting to take hold. Frankly, the Fed has been trying to stoke some inflation, so let's give them a "mission accomplished" on this goal (so far).

One thought: With a steep drop recently in the 10-year bond, there is an appetite for fixed income, which is interesting, as supply continues to hit the market (Fed is selling, so are the Chinese and the Treasury releases record amounts of notes/bonds). Imagine how steep the curve might be if these sellers were not present. Long bonds once again around 1%? Quite possible. 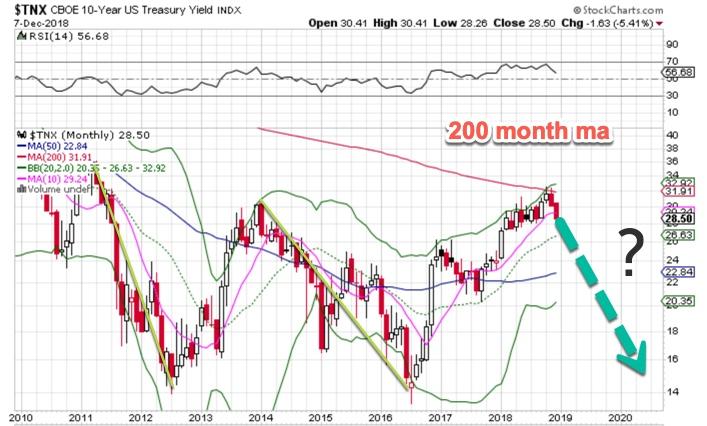 What's next for rates? The Fed has a big meeting with a press conference coming up just before Christmas, and all the sudden there seems a debate of whether they raise or not. I don't think it's a close call here, they will raise rates without much difficulty, but perhaps signal a slowdown of their intent to raise rates more than once. That word might soothe the equity markets a bit, which have been in whipsaw mode for a couple of months now.

The signal from such a statement may be taken poorly though, with an emphasis on slower growth down the road as a need for easier policy. It's a double-edged sword.

Get an email alert each time I write an article for Real Money. Click the "+Follow" next to my byline to this article.
TAGS: Bonds | Economy | Federal Reserve | Fixed income | Interest Rates | Investing | Markets | Treasury Bonds

On Friday alone markets added half a rate hike to 2023.

There are several things the Fed could do, but would it matter?

It Is Almost Buying Time Again: Here's My Shopping List

Let's Talk About the Elephant in the Room

Traders have cashed in elephant-sized returns on a number of stocks recently, but this isn't a meme stock.