The charts of Five Below (FIVE) are looking weak and could suffer another decline that could be precipitated by their next earnings report set for release after the close of trading Wednesday.

Let's review the charts and indicators. In our June 3 review of FIVE we wrote that "I have no special knowledge of what earnings for FIVE will be, but the charts and indicators suggest the risk of further weakness in the weeks ahead. Avoid the long side of FIVE for now."
In this daily bar chart, below, FIVE traded sideways from early June to late July. An unsustainable rally unfolded in August but by early October the rally and more had been erased. Prices made another rally into November but it has so far stopped at the underside of a resistance zone from August. FIVE is not far above the rising 50-day and 200-day moving averages.
The daily On-Balance-Volume (OBV) line has been in a decline from May and shows a lower high in August and a still lower high in November. This pattern and trend suggests more aggressive selling for several months. The Moving Average Convergence Divergence (MACD) oscillator has crossed to the downside for a fresh take profits sell signal.

In this daily Point and Figure chart of FIVE, below, we can see a potential downside price target of $192. 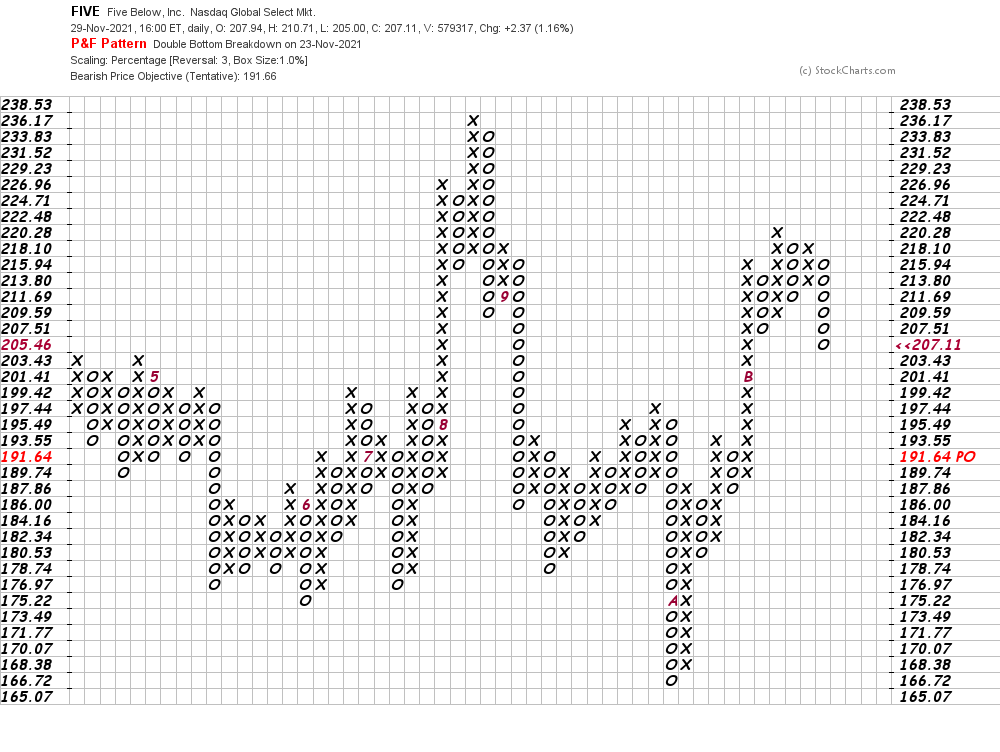 Bottom line strategy: I have no special knowledge of what FIVE is going to report to shareholders on Wednesday but the charts look weak and I would avoid the long side of FIVE for the foreseeable future.
Get an email alert each time I write an article for Real Money. Click the "+Follow" next to my byline to this article.
TAGS: Investing | Stocks | Technical Analysis | Trading | Household Products | Retail | Consumer Products | Consumer Discretionary | Earnings Preview