China's top leadership has typically been heavily populated by engineers. The country loves nothing more than a massive infrastructure project like the Three Gorges Dam, or the world's highest bridge which connects the southwestern provinces of Guizhou and Yunnan.

The Hong Kong-Zhuhai-Macau Bridge opened in October 2018. Connecting those three cities across the Pearl River Delta, it is the world's largest sea crossing, at 34 miles.

I took the bridge for the first time on Sunday, a day trip over to Macau for "grave sweeping," tending the graves of my Chinese in-laws. Both of my wife's parents moved from Macau to Hong Kong as young adults, and so their family is laid to rest there.

The bridge, which at US$18.8 billion cost twice its original budget to build, is sorely lacking in business. The 22 weeks of pro-democracy protests this summer in Hong Kong haven't helped increase demand, but it was already lackluster, and failing to meet government targets, even before the demonstrations began. My slow-moving bus was passed by a handful of cars. I could have counted them on fingers and toes.

You have to have a special permit to drive across the bridge, which is very expensive to acquire. Either you have to run a company that has paid 100,000 yuan (US$14,200) in tax to Guangdong Province in the last three years, or you have to "donate" 5 million yuan (US$712,000) to charities in the province. People who have bribed their way into China's parliament can also apply.

That's if you want one of the 10,000 permits issued to drive between Hong Kong and the mainland city of Zhuhai, which you can see just across the Macanese border. From there you can continue into the western portion of Guangdong Province. Only 300 Hong Kong cars are permitted to enter Macau itself, which is tiny, with heavily congested roads.

The alternative, as we did, is to park at the bus terminus near Hong Kong International Airport, and take a shuttle bus from one side of the bridge to the other. You can get a bus from Hong Kong to alight either in Macau, or on the mainland, getting off in Zhuhai. 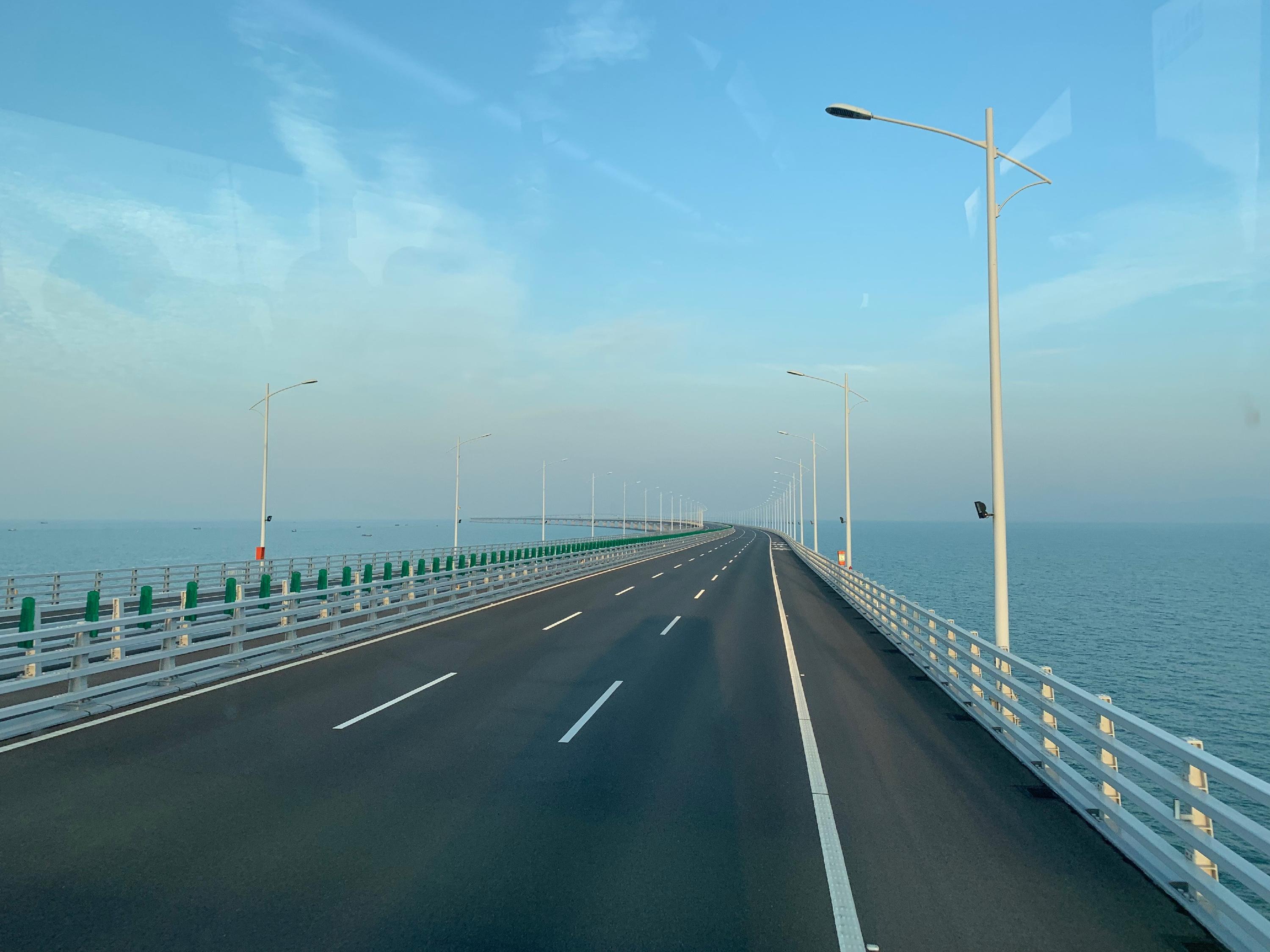 It's a 40-minute drive over the bridge in the shuttle bus to Macau. That's quicker than the 1-hour ferry crossing we used to have to make. (In my wife's youth, she took an overnight ship). At HK$65 (US$8.30) in each direction, the bus is also quite a bit cheaper than the HK$180 (US$23) one-way ticket by hydrofoil ferry.

My Hong Kong-born wife was very disappointed that the bridge uses simplified Chinese characters and mainland Chinese-style road signs. What's more, even though both Hong Kong and Macau drive on the left, the bridge drives on the right, like China. It's a mainland road. This design reminds us that Hong Kong isn't long for this world as a distinct part of China, with special rights you don't have in the People's Republic of Communism.

Britain, Hong Kong's former colonial power, drives on the left, of course. So did Portugal when it got its hands on Macau and established the road system, although Portugal itself switched sides (of the road) in 1928.

China also originally drove on the left. But it switched in 1946, under the U.S.-backed Nationalist government, which wanted to bring the country in line with the driving in what was then the world's largest auto market, the United States.

The bridge is a nudge to bring Hong Kong a little closer to the mainland. No less a prominence than China's "emperor for life," President Xi Jinping, cut the ribbon on the structure - under heavy security, since he was already pretty much persona non grata in Hong Kong. After this summer of discontent, I doubt he'll be hopping over the bridge in his bulletproof Hongqi Red Flag limousine anytime soon.

Construction of the bridge was an environmental disaster. It disrupted the territory of our Chinese white dolphins. Even though there's a sign on the bridge saying you may see one of these highly-endangered creatures, and one of the man-made islands is named for the species, you'll be very lucky. There were only 32 spotted in Hong Kong waters all of last year, a record low, and none at all in the vicinity of the bridge, a former haunt of theirs. Tour operators to see them say they've cancelled 95% of the trips this summer. There is now a protected zone for the dolphins, which have all died or left.

The bridge is instead symbol of another pale mammal, the white elephant. The Communist Party is hell bent on selling its concept of the "Greater Bay Area," unveiled in China's 13th Five-Year Plan. The grand concept of the "GBA" connects nine mainland cities in Guangdong Province with Hong Kong and Macau.

The idea is flawed even in its name, since the area is not a bay at all, but instead a river delta. The concept also relies on pouring a lot of concrete to link cities that may not have much to do with each other, or any reason to connect. In the case of Hong Kong, which opened a new high-speed rail link to mainland China at the same time as the new bridge, it may not even want to be linked closer to China.

Cities grow organically, and there's normally a reason one has succeeded at one thing, and another has not. The east side of the Pearl River Delta has blossomed, with Shenzhen just across the border from Hong Kong having the highest per-capital income in China. The former fishing village was the first special-economic zone allowed privileges that the rest of the nation did not have in terms of foreign trade. It benefited from being next to the free-trade British colony.

Dongguan, the industrial wasteland inland from Shenzhen, has been Factory Central. When I moved to Hong Kong in 2001, it was populated by light manufacturing making cheap shoes and electronics. Now, even the factories are being priced out, and moving to the Chinese hinterland.

The western side of the Pearl River Delta is a wasteland. Zhuhai in 1980 had similar special economic zone status granted as Shenzhen, but has been best-known for making cut-priced furniture, including a lot of knock-offs of Chinese antiques. Its "high-tech" industry is low end: it's a major manufacturing site for after-market cartridges for inkjet printers and laser toners. Zhongshan inland from it is mainly agricultural, a peasant backwater that is progressing into light fixtures, cheap clothes and electrical goods. In other words, Dongguan's successor.

There's not much reason, unless they're after those cheap goods, for people living and working in Hong Kong, the wealthy financial hub of greater China, to head to Zhuhai and Zhongshan. And not many people are. Trucking cheap goods into expensive Hong Kong to ship them out doesn't make sense when China has cheaper ports.

The Hong Kong government projected a daily vehicle count of 9,200 using the bridge in justifying the project. Instead, the tally in the 12 months that the bridge has been operating has ranged from 2,416 to 4,791 - and that's including the shuttle buses that leave every five minutes at peak times.

Granted, Hong Kong tourist arrivals as a whole were down 50% in the first half of October, the most recent figures available. Passenger arrivals via the bridge into Hong Kong in September were around 500,000, half the 1 million arrivals in the bridge's first full month of operation.

Aside from serving as a symbol of Hong Kong's integration into mainland China, there's little reason for the bridge to Zhuhai. It did shave 20 minutes off my travel time, and saved me a few bucks, but it's largely been a money pit. Construction companies, which in China have huge excess capacity, were the main beneficiaries.

China is also currently working on a bridge between Shenzhen, just across the border from Hong Kong, and Zhongshan, just to the north of Zhuhai. That bridge, due to complete in 2024, will duplicate much of the purpose of the Hong Kong-Zhuhai-Macau bridge.

This summer's protests won't continue forever. But even if we do find some resolution to Hong Kong's intractable problems, I suspect I'm still going to find plenty of space on the bus the next time I'm heading back to Macau to tend my in-laws graves. China may be covered in concrete. But the roads and bridges only have a point if you've got somewhere to go.

Get an email alert each time I write an article for Real Money. Click the "+Follow" next to my byline to this article.
TAGS: Economy | Investing | Construction & Engineering | China