In his second "Executive Decision" segment of Mad Money Wednesday night, Jim Cramer spoke with Bryan Johnson, chairman, president and CEO of First Horizon National Corp. (FHN) , which announced earlier this week it is merging with Iberia Bank (IBKC) . Shares of First Horizon are up 14% over the past six months.

Johnson said the merger with Iberia will give First Horizon a strong presence throughout the Southeast, including new areas where they don't have branches, including Alabama and Georgia. The deal will also give the combined bank a strong balance sheet to serve their customers in new ways.

Johnson continued by adding that he's very encouraged by the economic activity he's seeing, especially throughout the Southeast. He said businesses are migrating to the area, which is great for their local communities. When asked why businesses choose the south, Johnson said there are a lot of advantages, ranging from favorable tax policies to an educated workforce that's ready for new challenges.

Finally, when asked for his thoughts on the Federal Reserve, Johnson said that he felt the Fed did the right thing by cutting rates and reversing their earlier hikes. He said the economy is strong and the rate cut will help keep things that way.

The On-Balance-Volume (OBV) line has moved higher since late December signalling that buyers of FHN have been more aggressive this year.

The Moving Average Convergence Divergence (MACD) oscillator crossed above the zero line this month for an outright buy signal.

In this weekly bar chart of FHN, below, we can see a bullish picture with prices above the rising 40-week moving average line.

The weekly OBV line is pointed up as buyers are more aggressive and the MACD oscillator is in bullish territory too.

In this Point and Figure chart of FHN, below, we used weekly close only data to generate the chart. A price target in the $22 area is being projected. 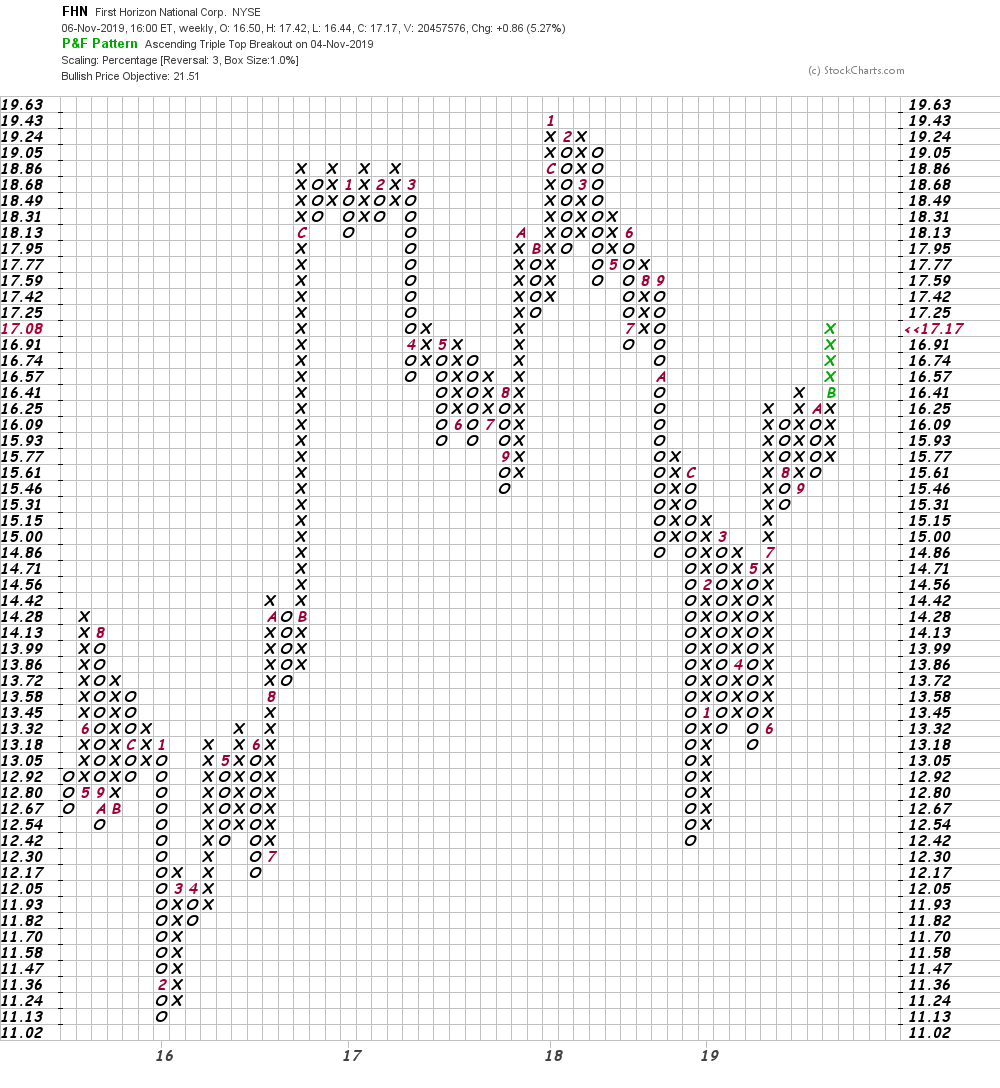 Bottom line strategy: The charts of FHN are pointed higher. Hold longs and if flat you can consider going long for a $22 price target.

Get an email alert each time I write an article for Real Money. Click the "+Follow" next to my byline to this article.
TAGS: Mergers and Acquisitions | Fundamental Analysis | Investing | Stocks | Technical Analysis | Trading | Banking | Financial Services | Mad Money | Executive Interview