Mandia said the attacks just keep on coming. Right now, FireEye is still working on cleaning up the remnants of the massive Solar Winds (SWI)  cyberattack. This week we learned of four new zero-day vulnerabilities on Microsoft (MSFT) Exchange email servers. Zero-day exploits are those which currently have no patches or fixes available.

Mandia was quick not to place blame. however, stating that developing software is a lot more complex than most people realize and companies are well-intentioned and are doing the best they can.

When asked how FireEye is able to detect intrusions and attacks, Mandia explained that their entire organization is built for investigations big and small. As soon as an anomaly is detected, they spring into action and deconstruct entire systems until they discover exactly what happened and why.

Let's spring into action with a look at the charts.

The On-Balance-Volume (OBV) line jumped strongly in December and has slowly declined from late December telling us that the aggressive buying in December was a selling opportunity for some traders.

The Moving Average Convergence Divergence (MACD) oscillator has moved below the zero line for an outright sell signal.

In this weekly bar chart of FEYE, below, we can see a weakening picture. Prices are edging lower but still above the rising 40-week moving average line. The weekly OBV line has been stalled/soft the past two months. The MACD oscillator is crossing to the downside for a take profit sell signal.

In this daily Point and Figure chart of FEYE, below, we can see a downside price target in the $17 area. 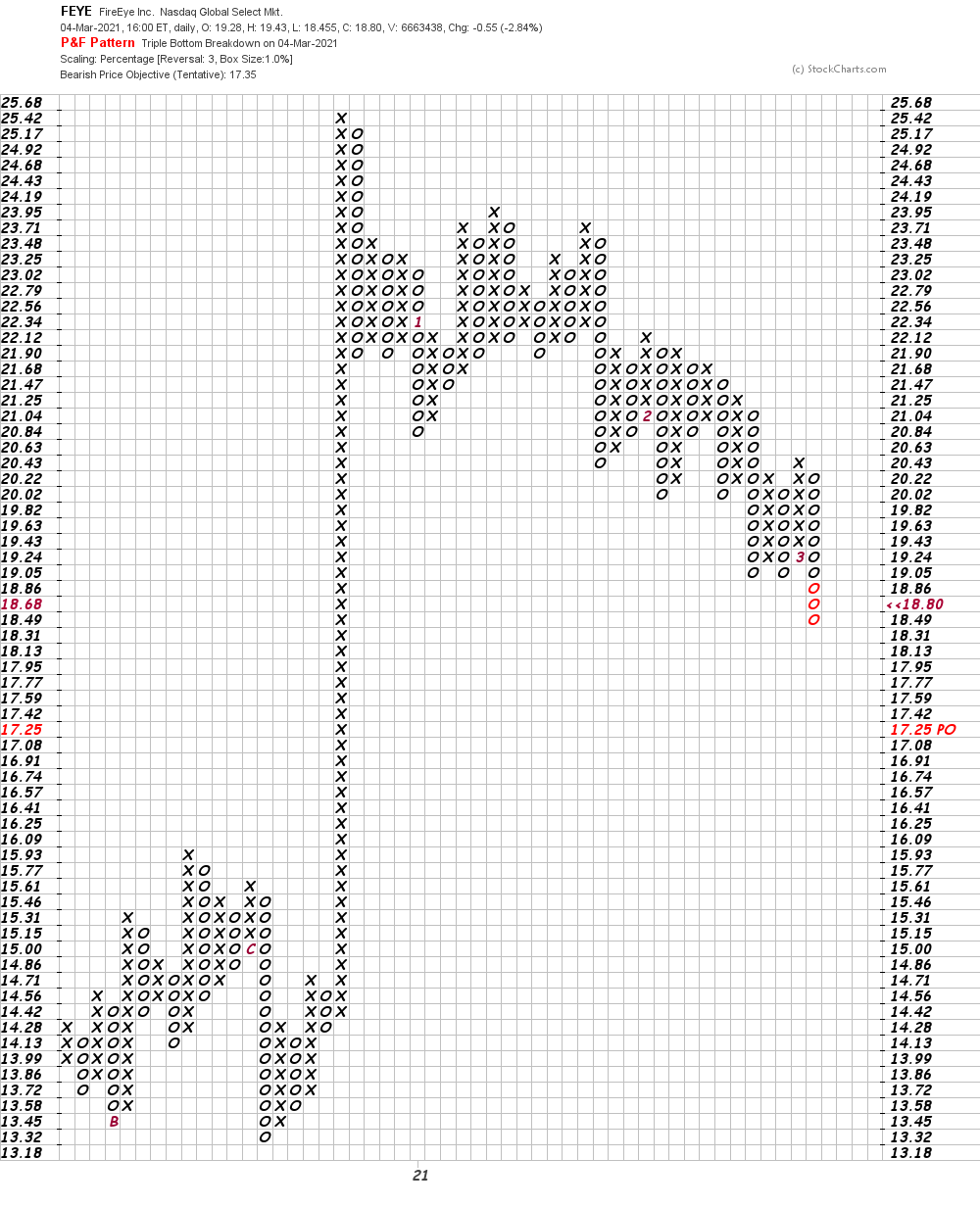 In this weekly Point and Figure chart of FEYE, below, we see that the software is projecting the $17-$16 area as a price objective but chart support is probably a bit lower.

Bottom line strategy: We reviewed the charts of FEYE on November 6 and wrote that "Traders could go long FEYE at current levels risking a close below $15. $22 is our first price target." If traders were probably stopped out in December before the surge higher, today I suggest no long position in FEYE - just stand aside and see how far the current correction carries.

Get an email alert each time I write an article for Real Money. Click the "+Follow" next to my byline to this article.
TAGS: Investing | Stocks | Technical Analysis | Trading | Cybersecurity | Technology | Mad Money | Executive Interview