On Friday morning, Bank of America (BAC) , along with most of the other large US banks, kicked off another earnings season in a flurry of releases. The early response is negative as many of these banks appear to be preparing for a tougher economic environment ahead.

I came in long Bank of America, though I had cut that position in half coming in. Simple risk management. Good thing.

For the firm's fourth quarter, which ended December 31st, Bank of America posted GAAP EPS of $0.85 on revenue of $24.53B. The revenue print was good enough for year over year growth of 11.2%, while both the top and bottom line results exceeded consensus view. Net interest income (NII) increased 29% annually and 6.5% sequentially to $14.68B which is excellent.

Only thing is that Wall Street was looking for $14.8B. Noninterest income printed at $9.85B, which easily beat expectations for $9.3B. However, this performance was still down 7.9% both sequentially and from the year ago period.

Consumer Banking drove revenue of $10.782B (+21%), while provision for credit losses increased to $944M (from $32M last year) driven by a dampened macroeconomic outlook. Noninterest expense increased 8% to $5.1B, resulting in net income of $3.577B. The net income print was up 15% and is a new quarterly record.

Global Wealth and Investment Management drove revenue of $5.41B (up small), while provision for credit losses increased to $37M (from $-56M last year). Noninterest expense increased 1% to $3.8B, resulting in net income of $1.2B. Net income for this business was down 2.1%.

Global Banking drove revenue of $6.438B (+9%), while provision for credit losses increased to $149M (from $-463M last year) driven by a dampened macroeconomic outlook. Total investment banking fees decreased 54% to $1.3B. Noninterest expense increased 4% to $2.8B, resulting in net income of $2.54B. Net income for this business was down 4.8%.

Global Markets drove revenue of $3.861B (+1%), while provision for credit losses decreased to $4M (from $32M last year). Sales and trading generated $3.5B in revenue. Within sales and trading... fixed income related revenue increased 37% to $2.2B, while Equities related revenue increased small to $1.4B. Noninterest expense increased 10% to $3.2B, resulting in net income of $504. Net income for this business was down 25%.

Chair and CEO Brian Moynihan commented in the press release: "We ended the year on a strong note growing earnings year over year in the 4th quarter in an increasingly slowing economic environment. The themes in the quarter have been consistent all year as organic growth and rates helped deliver the value of our deposit franchise. That coupled with expense management helped drive operating leverage for a sixth consecutive quarter.

Our earnings of $27.5B for the year represent one of the best years ever for the bank, reflecting our long-term focus on client-relationships and our responsible growth strategy. We believe we are well positioned as we begin 2023 to deliver for our clients, shareholders and the communities we serve."

Is there much here that surprises me? No. We knew that investment bankers did not have a great quarter. We knew that net interest income would be huge. We knew that fixed income traders would outperform equity traders. We also knew that the banks would have to prepare more so than in recent quarters for potential credit losses.

That said, I think that the size of these provisions is scaring Wall Street a little this morning. Just look at the reasons given where there were increased provisions made... "driven by a dampened macroeconomic outlook." That's not very encouraging. Just look at Brian Moynihan's own comments... "an increasingly slowing economic environment." Hmmm.

I get that net interest income will be a driver for 2023. That's why my only two longs in this space are Bank of America and Wells Fargo (WFC) . I also understand that with the economy either in recession or close to it, that it will be very difficult for the banks to grow consumer and business loans, or increase investment banking fees. That's why I have reduced my holdings in both of these names.

Do I buy this dip? The banks are well capitalized ahead of the storm. There are parts of the business that could do well despite or in spite of a recession. Trading. Sales of fixed income securities. I do not think that I bring these positions back up to their year ago sizes, but I do think that I can add on this morning's dip. 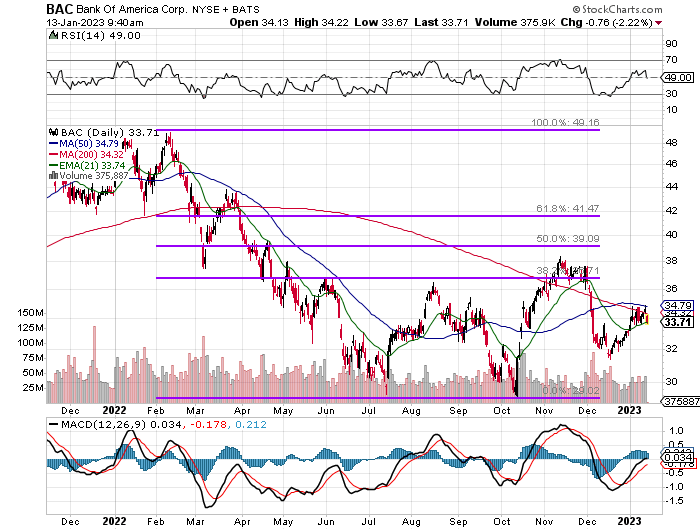 The shares have found support at the 21 day EMA (exponential moving average) since retaking that line in late December. This morning, I see the shares struggling to hold that level. Should those shares hold, it really will not take much to regain the 20 day and 50 day SMAs (simple moving average) in short order as all three lines are bunched.

What I am going to do is either add these shares as the 21 day line fails and the swing traders bail out, or as the shares take that 50 day line and all of the portfolio managers rush to increase exposure. I really do not see the need to add in between $33.74 (21 day EMA) and $34.79 (50 day SMA). To do so, really would in my opinion, put the buyer at risk of having made this purchase at or close to resistance.

Get an email alert each time I write an article for Real Money. Click the "+Follow" next to my byline to this article.
TAGS: Earnings | Investing | Markets | Stocks | Technical Analysis | Trading | Banking | Financial Services

ADP Shares Could Rebound, but There's a Bigger Picture

Here's what the charts of Automatic Data Processing are telling us now.

What's Next for Block's Stock?

Watch for a possible rally.