Threat level zero. Night wears into morning. Semi-permanent aches and pains created through the intersection of life with time subside. Fires that stoke to mind heat up. Ideas flow anew. I think, therefore I am. I am, therefore I rock. When you rock, you roll. Roll I shall.

Equity prices appear overvalued across a plethora of historical metrics. I have warned you about historical metrics. We still study Joshua Chamberlain's fearless charge at Little Round Top. The 20th Maine was out of ammo. We still study, George Meade's decision to strengthen the center on the third day at Cemetery Ridge. He used Robert E. Lee's tendency toward aggression against Pickett, even though Lee had predicted that Meade would make no mistake to his front. History is to be respected, to be used as a guide, not as a rule book for future behavior. It is different this time. Why? Because it's never the same. Understand? It is that easy. You want science? You're in the wrong game.

This game is the only one I know of where truth and theory must co-exist with instinct and a flair for the arts. One can not play the game effectively if one can not learn from both victory and defeat, while cultivating a higher level for creativity. One last thing, high IQ? Big deal. This room is filled with high IQs, it's your EQ that counts in this neck of the woods, as well as in your life. So, can you can keep your cool? Even when the heat is on?

If markets sell off ahead next week's holiday, it will be simply because they are short-term overbought, not at all because the melt-up into 2020 has been cancelled, and certainly not because the President of the United States has been impeached by the House of Representative in a strictly partisan vote.

There are, of course, several real threats to financial market health at this time. Would you consider among them the short-term liquidity issues that the Federal Reserve is correctly addressing, or an escalation of global trade tension, be it a break-down of progress made with China, or a break-down in anything to do with Europe. Those issues are not, I repeat not, what I refer to at this point. The most overt threats to market health and by extension to U.S. economic growth, would be the removal of this president from office, most likely through an election shock, resulting in a left leaning candidate favoring higher taxes and increased regulation. The other would be an inflation shock at the consumer level that forced the central bank to increase short-term interest rates before yield curve spreads were wide enough to properly absorb such a change in policy.

Yes, I saw the very late selloff across the major indices on Wednesday afternoon. That was algorithmic, not the result of reasoned thought. Wednesday was actually the third consecutive day that markets ran sideways. Breadth remains quite healthy. Volume continues to rise both at 11 Wall Street, as well as up at Times Square, and that volume remains decisively positive. Winners beat losers by more than a little on Wednesday.

Honestly, it feels right. Doesn't it? On valuation, should the economy stay out of recession, and right now, that's not even on the radar, one might think that earnings (profitability) might catch up to valuations. We still have a very strong consumer here in the U.S., and that consumer very likely has a job. Real interest rates remain negative throughout the developed world. Nominal interest rates remain negative throughout much of it despite the U.S. curve, and despite Sweden's move last night. (Three cheers for the Riksbank.)

Trillion dollar deficits have become "no big deal" here in the U.S. Extremely loose fiscal policy has become the norm, one of the few concepts eagerly embraced on both sides of the aisle in Washington. Note to novice readers... yes, this means that we are pulling at least some portion (likely a large portion) of economic activity forward so that the present is less painful than it should be. The bell will indeed toll, and when it does, clouds will gather, lightning will strike, children will cry, and there will indeed be the gnashing of teeth. When does that day comes? Who the heck knows. Could be generations. Could be next week. Feelin' lucky? Spin the wheel.

Have I mentioned that outside of a few glaring examples of mismanagement, corporate execution has become broadly excellent in this modern era. Many firms had to learn to operate on the skinny in the wake of the financial crisis. Corporate America has to adapt in order to overcome. Part of this corporate reinvention has been learning how to manage operations, and even repurchases through cheap credit. The day when those teeth go gnashing? That's the day when the weak players that have been disguised through this cheap credit are revealed. So, yes, some kind of corporate credit crisis would be a third threat, but one not likely to hurt us today.

I am still working on this. Of course I'll keep you up on what I think, I always do. Very early, I am thinking of placing more focus on the kinds of stocks that have been undervalued, not relative to the market itself so much, but relative to their own historical averages. I think, those sectors that have come under pressure politically might be the spot. On that, I think I need the majority of aggregate demand for products and services to be inelastic in nature. Health Care... Pharma, health care tech & equipment, Energy... services and distribution, less focus on production.

Even with valuations not cheap, I think I must always maintain elevated exposure to the information technology space. The semis are more reliant upon growth and trade, but software is how business happens in this modern era, and software is where the margins are. Sector profit margins for information technology ran almost twice as high as for the S&P 500 broadly in the third quarter. We'll see. I'm not done thinking yet. Hey look, a squirrel.

Less than a week back, we learned that Nvidia (NVDA) had offered no concessions to the European Commission meant to get the firm's $6.8 billion acquisition of Mellanox Technologies (MLNX) across the finish line. Mellanox, for those who have not been following this story, is an Israeli provider of high end computer networking equipment with a focus on the data center, storage and cloud computing. Intel (INTC) was also thought to be interested in the name at one point.

This morning, we learn more. We learn that this is likely to be cleared without condition by antitrust authorities in the EU. Once this is fact, and it should be by later on Thursday, approval for this transaction will have been achieved in both the U.S. and EU, leaving China as the only question mark. Let's not forget that both Alibaba (BABA) and Baidu (BIDU) are significant clients of Mellanox, meaning that perhaps approval in China could come about as part of a signed trade deal.

As for Nvidia, the firm has already told us that they expect the integration with Mellanox to be immediately accretive to earnings, gross margin, and free cash flow. Nvidia expects to be able to finance the deal through its available cash position. Earlier this week, analyst Mark Lipacis (5 stars) of Jefferies increased his target price for Nvidia to $255 from $250, while maintaining his Buy rating. Lipacis cited Nvidia as the "dominant beneficiary" as the planet moves towards a more complete adoption of artificial intelligence technology. 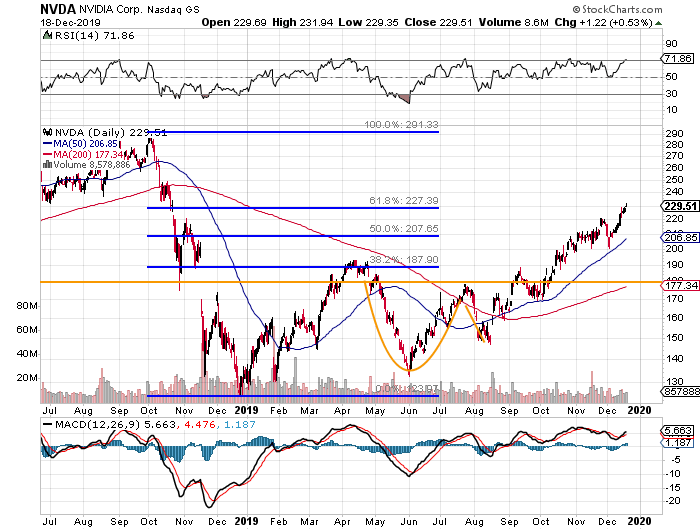 Readers will see that these shares have clearly moved beyond price targets implied by the cup with handle pattern completed last spring. Nvidia made short work of the 50% Fibonacci level at $208 this past November (actually, that fight took a month), and this week, Nvidia seems to be successfully taking on the 61.8% retracement level at $227. Could NVDA move toward a 100% retracement of the late 2018 selloff? Let's look at this stock from a different angle. 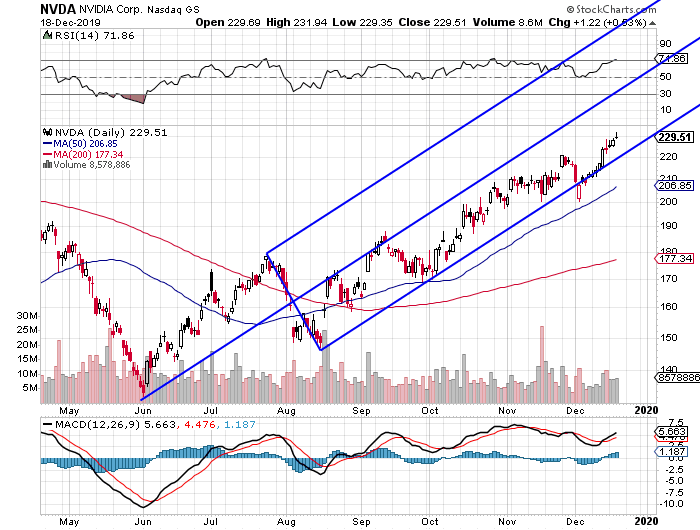 Relative Strength? Possibly overbought. Daily MACD? Strong as an ox. 50 day SMA? There for support. The Pitchfork? Suggests no crack in momentum whatsoever. In fact, any approach of the central trend line of this Pitchfork would make the target price over at Jefferies a reality. I have not reduced this name of late at all, which is unusual for me once a target is breached. The force is strong in this one, and I only run with about 40% of a position here, so I have been slow to take my prize. I still don't think I sell any here.

Add? I think maybe that horse has left the barn.

Leidos Technology (LDOS) really soared on news that the firm would acquire privately held Dyanetics for $1.65 billion in cash. Dyanetics is a play on the growing space industry, and is currently involved in both Boeing's (BA) Space Launch System, and Lockheed Martin's (LMT) Long-Range Hypersonic Weapon, as well as Raytheon's (RTN) Hypersonic Glide Body program.

The deal is expected to add a rough $1 billion annually to revenue generation at Leidos. Currently the street projects a rough $11.6 billion in sales for the firm for the full year 2020. The shares are trading at 17.6 times next 12 month's earnings. 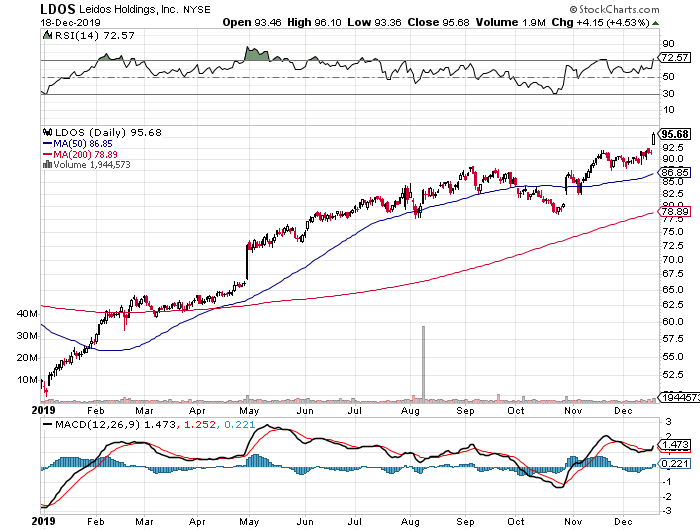 I don't buy this one today, but this one is certainly on my holiday wish list. Maybe $92 works for a few shares. Not this week it won't We'll see.

Get an email alert each time I write an article for Real Money. Click the "+Follow" next to my byline to this article.
TAGS: Economy | Investing | Markets | Politics | Stocks | Technical Analysis | Trading | Software & Services | Technology