You learn as a youngster to walk past the tables of shell game peddling hucksters. Watch the little bean for a minute, or even worse, engage in conversation with these fellows who always seem to set up on crowded sidewalks, and who always seem to know 60 seconds before the police show up, and you will lose what money you showed up with. Financial market behavior must choose now between the easy, the tense and the uncertain. What could possibly go wrong?

First, the easy. That was the FOMC's signaled path for the trajectory of monetary policy last week. There is no doubt that both equity and debt markets now move in the same direction upon talk of such policy that would be more in line with what other central banks are doing. The Federal Reserve Bank really is the only force on the planet that can get stocks, bonds, and thanks to a suddenly softer U.S. dollar, commodities to all rise in value in some kind of semi-correlated fashion. By the way, the S&P 500, even after some minor consolidation on Friday is now 7.2% higher for the month of June, good enough if the month ended right now for the best June since 1955. The Brooklyn Dodgers won the World Series that year, just to put in perspective how long it has been. The index saw a gain of 2.2% last week alone despite that sideways to lower Friday action. This brings us to the Tense and then the Uncertain.

Just how much is at stake as the situation between the U.S. and Iran evolves? Yes, there was certainly a boost enjoyed last week across the tech sector, as investors made a move toward riskier, growth type names in response to the Fed. However, the oversold Energy sector easily led equity markets to the upside. Yes, the weaker dollar helped, but so did turmoil in the Gulf of Oman/Straights of Hormuz neighborhood. As attacks have been made recently both on commercial traffic through the region as well as U.S. military assets, the administration in Washington has shown admirable restraint in not commencing with military retaliation. The mere thought has, however, boosted shares of defense contractors.

That said, there apparently has been some kind of offensive cyber attack made against the sites that launched against the U.S. Navy reconnaissance drone last week. It is also expected that further sanctions will be prepared to be administered against the Iranian economy this week. President Trump was clear: "Look, you can't have nuclear weapons. And if you want to talk about it, good. Otherwise you can live in a shattered economy for a long time to come." How much impact further increasing sanctions will have against an economy that is already considered to be something like 80% negatively impacted is unclear. Does Iran's belligerence spread across the region? Also unclear.

I don't expect markets to respond to a higher level of sanctions in the least. The risk here is still out on and over the area's waters, both militarily and to the transport of cargo through the region. Threat of a Black Swan event? Well, we would have seen this coming if something terrible actually happens. We'll call this a bird of a different feather.

Asian markets are well mixed on Monday morning, though I don't really see any major market that has strayed too far from where it closed on Friday night. The good news is that Chinese news agency Xinhua reported on Sunday that President Xi Jinping will attend the G-20 summit later this week in Osaka, Japan. We have that much.

This anticipated meeting between the presidents of both the United Sates and China is where the next market move comes from. What comes of this meeting? Leg up? Leg down? You could be looking at the implementation of tariffs on the remaining $300 billion worth of Chinese exports to the U.S. That would be a fairly severe negative force in the marketplace, a marketplace trading close enough to record highs, and indeed poised for some contraction. Keep in mind that Q2 earnings are expected to print now at -2.6% y/y across the S&P 500 on revenue growth of 3.9%. Despite the ongoing trade war, and despite Q2 projections for both earnings and revenue that has been revised lower in recent weeks, the S&P 500 now trades at 16.8 times 12 month forward looking earnings, up from 16.5 times just one week ago.

The bottom line going into the G-20 is this: President Trump is now on re-election mode. President Xi, though leader for life, still must perform, and his economy is undeniably slowing quite rapidly. Tariffs already implemented have injured the Chinese economy, and that economy has started to lose business that will likely never return. In short, both leaders would stand to benefit from some kind of limited agreement that accomplishes more in the way of headline generation than in qualitative substance. Will they agree to compromise on such an outcome? I really have my doubts.

While both leaders will walk away expressing optimism, the facts are this: President Trump has never backed down from his stance on China. The trade imbalance was the easy stuff. U.S. demands that China stop stealing U.S. intellectual property, China stop subsidizing state owned corporations that compete directly with U.S. interests, China allow for greater foreign access to their own markets will be difficult for China to agree to, as that nation does not even admit to such behavior. One thing the Communist party has always been consistent in, is the exercise of power. Does anyone think the Chinese government actually passes into law, policies that allow for lesser influence over their own markets, even if it makes sense economically? Especially if policing such changes appears to leave the other side in a position of authority?

I can't answer that question because I really don't know. I would expect that at some point, this summer the schedule of U.S. tariffs on Chinese goods might be expanded incrementally, starting small ... at maybe 10%. Tariffs already implemented are likely why we are about to witness earnings contraction on increased revenue. That's called a margin squeeze where I'm from. The geniuses called tariffs a tax on the consumer. That's only if the consumer is willing and/or able to pay more. Otherwise, tariffs are a tax on the purveyor. This is why the FOMC has signaled as they have. Not because many of us think they made a policy error in December. Though, I think it obvious.

General Mills (GIS) reports the firm's fiscal fourth quarter this Wednesday morning. Quite honestly, this is the type of name that perhaps I only take a look at when the corporate calendar is slowing down. On that note, JP Morgan (JPM) and Citigroup (C) don't go to the tape for another three weeks, so if not for the Fed, China, and Iran, this would be the quiet season.

You know the General Mills portfolio of brands... Betty Crocker, Chex, Progresso, Green Giant, Yoplait, Pillsbury, Cheerios, Haagen Dazs, and last, but not least... Blue Buffalo for the pets. Nothing flashy. No likely surprises, up or down. 3.7% dividend yield though. That looks a lot nicer in a yield starved world that tries to force risk upon the investor who is trying to make some hay. In order to maintain an accepted level of diversity across my portfolio, there has to be some value as well as growth. I eat Cheerios every day. Green Giant? Almost every day. Progresso? When it's on sale. Basically, I'm a customer.

What I see fundamentally is a company that has struggled. Earnings growth has been pedestrian, but there has not been a quarter where such growth contracted year over year since late 2017. Revenue growth has moved from low single digits to high single digits over the past three quarters. Fund ownership stands at only 37%, but has grew significantly (+4.8%) for the March reporting period from that of December.

Notably, Goldman Sachs downgraded the stock from a "Neutral" to a "Sell" on May 29th, while also cutting the firm's price target from $42 to $41. I bring that up because the stock plummeted that day on that downgrade, then rallied 12.5% off of the low of that dip, and taking back all of the lost ground over three weeks as the investing public appears to have rejected that call. Take a look.

Interestingly, perhaps all that the Goldman Sachs downgrade did, really, was provide a nice handle for a cup pattern that was an incredible year and a half in the making. If I see what I think I see, then the pivot would be the peak of the right side of that cup, or $53.65-ish. Given a cup with a depth of 40%, on top of that 12% handle, is it crazy to think this stock can go to $64 or $65? I would not bet the farm. This could end up a very bad week to be wrong about anything, but it sure looks to me like General Mills is making an attempt at the slow growth, value version of a breakout. See what I mean? 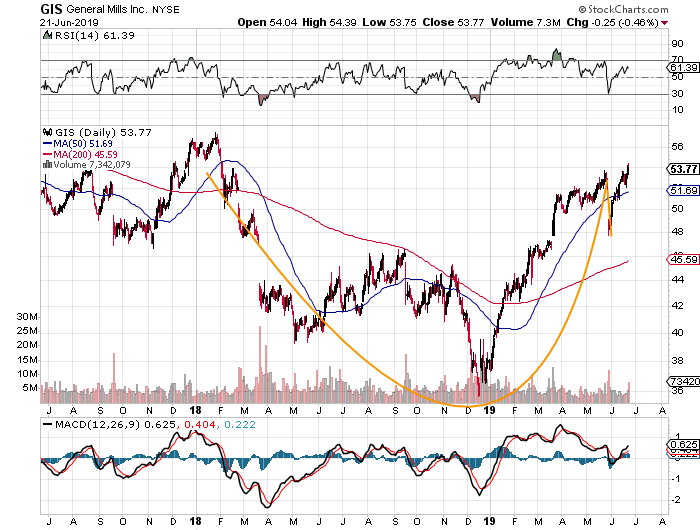 My thought is this. A July $55 call will run the investor roughly 99 cents, and there really are no calls at higher strikes priced where one could sufficiently reduce the outlay. July $52.50 puts will still pay about $1.25. That may be worth it. With an equity stake, though not yet announced, there is a considerable likelihood that the firm will pay 49 cents (based on previous payout history) a share sometime in August.

Note: There are no significant quarterly earnings scheduled for release today.

(J.P. Morgan and Citigroup are holdings in Jim Cramer's Action Alerts PLUS member club. Want to be alerted before Jim Cramer buys or sells JPM or C? Learn more now.)

Get an email alert each time I write an article for Real Money. Click the "+Follow" next to my byline to this article.
TAGS: Economy | Investing | Markets | Politics | Stocks | Technical Analysis | Trading | China | Middle East