It's the end of an era, as the legendary FedEx (FDX)  founder, Fred Smith, announced that he's stepping down as the company's CEO. In his first "Executive Decision" segment of Tuesday's Mad Money program, Jim Cramer spoke with Smith about his career and many successes at FedEx.

Smith said he never could have foreseen the success at FedEx. While his research decades ago clearly showed a demand for overnight delivery, building a network is hard. He said FedEx had enormous upfront expenses that needed to happen before they could even ship their first package. Years later, FedEx's biggest challenge was transitioning from business-to-business shipments to the e-commerce world of business-to-consumer.

When asked about what he was most proud of, Smith said it's the opportunities they were able to give to hundreds of thousands of workers around the globe. Creating millionaires is great, he said, but helping the working class is the most meaningful.

As for what's next for FedEx, Smith explained that there are no plans to replace hard-working FedEx drivers with autonomous vehicles anytime soon, but they are looking into autonomous trucks to help with long-haul highway routes.

Finally, when asked about the state of global trade, Smith said that the U.S. must maintain a working relationship with China and work together to solve our imbalances.

Putting the adoration aside, let's check out the charts and indicators.

In our last review of the charts of FDX on December 21, we wrote that "Aggressive traders could go long FDX at current levels if they can risk a decline to $225. Add to longs above $256."

In this updated daily bar chart of FDX, below, we can see that our positive stance on FDX lasted only a few weeks as price stalled out in early January and sank to a new low in early March. The share price of FDX has rebounded in recent days and quickly sprinted back above the declining 50-day moving average line. The 200-day line has a negative slope and intersects above $220. The trading volume shows a slight rise the past two months and that is a minor positive.

A volume spike around the middle of March helps attract attention and the gentle rise in the On-Balance-Volume (OBV) line this month is encouraging. The trend following Moving Average Convergence Divergence (MACD) oscillator is just below the zero line and close to a crossover and outright buy signal.

In this weekly Japanese candlestick chart of FDX, below, we can see that prices have been in a rolling decline for over a year now. Prices are trading below the declining 40-week moving average line.

The weekly OBV line shows a decline in January and February and a recovery in March so far. The MACD oscillator is below the zero line and close to an upside crossover and cover shorts buy signal.

In this daily Point and Figure chart of FDX, below, we can see that the software is projecting an upside price target in the $287 area. 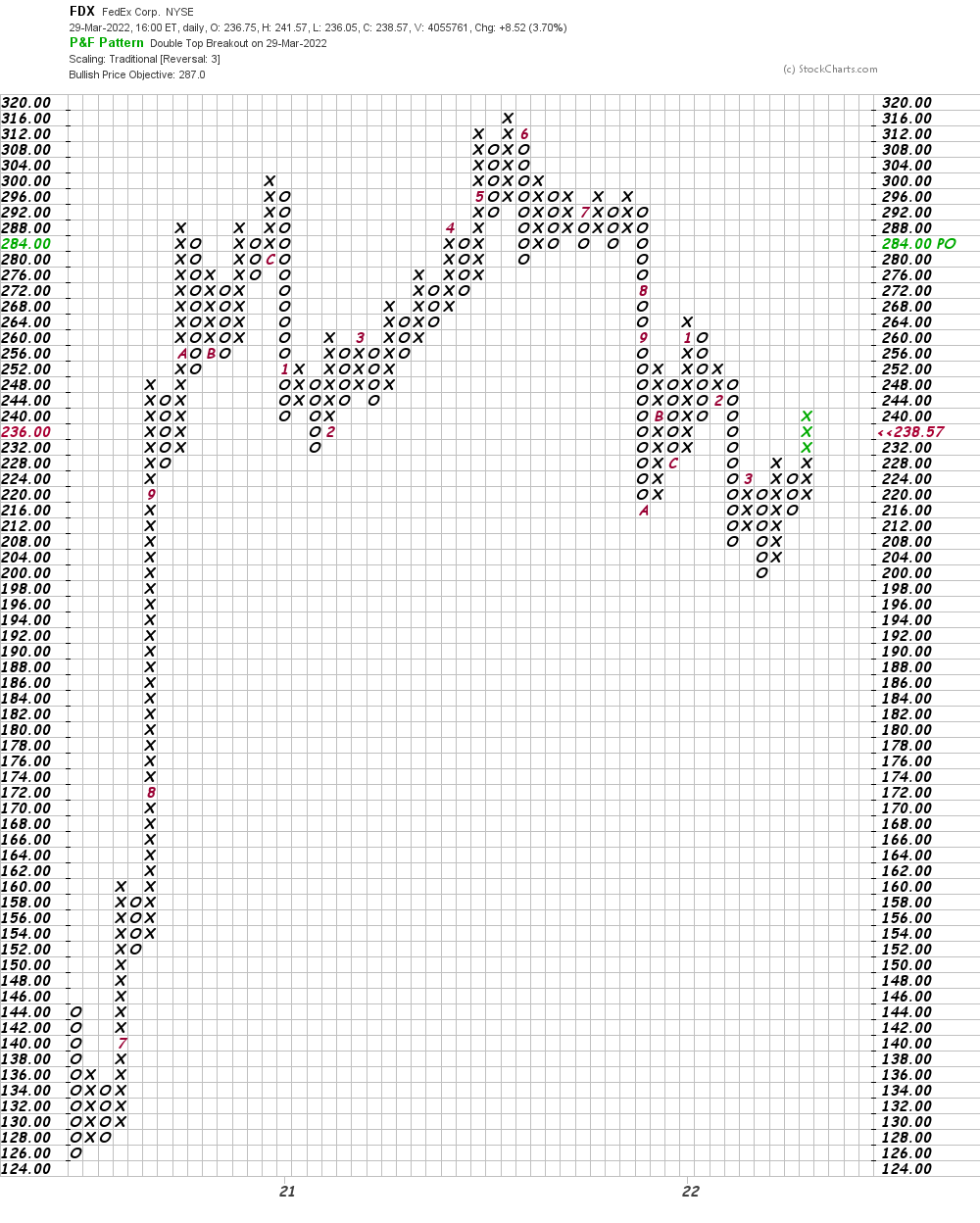 In this weekly Point and Figure chart of FDX, below, we can see a $323 price target. 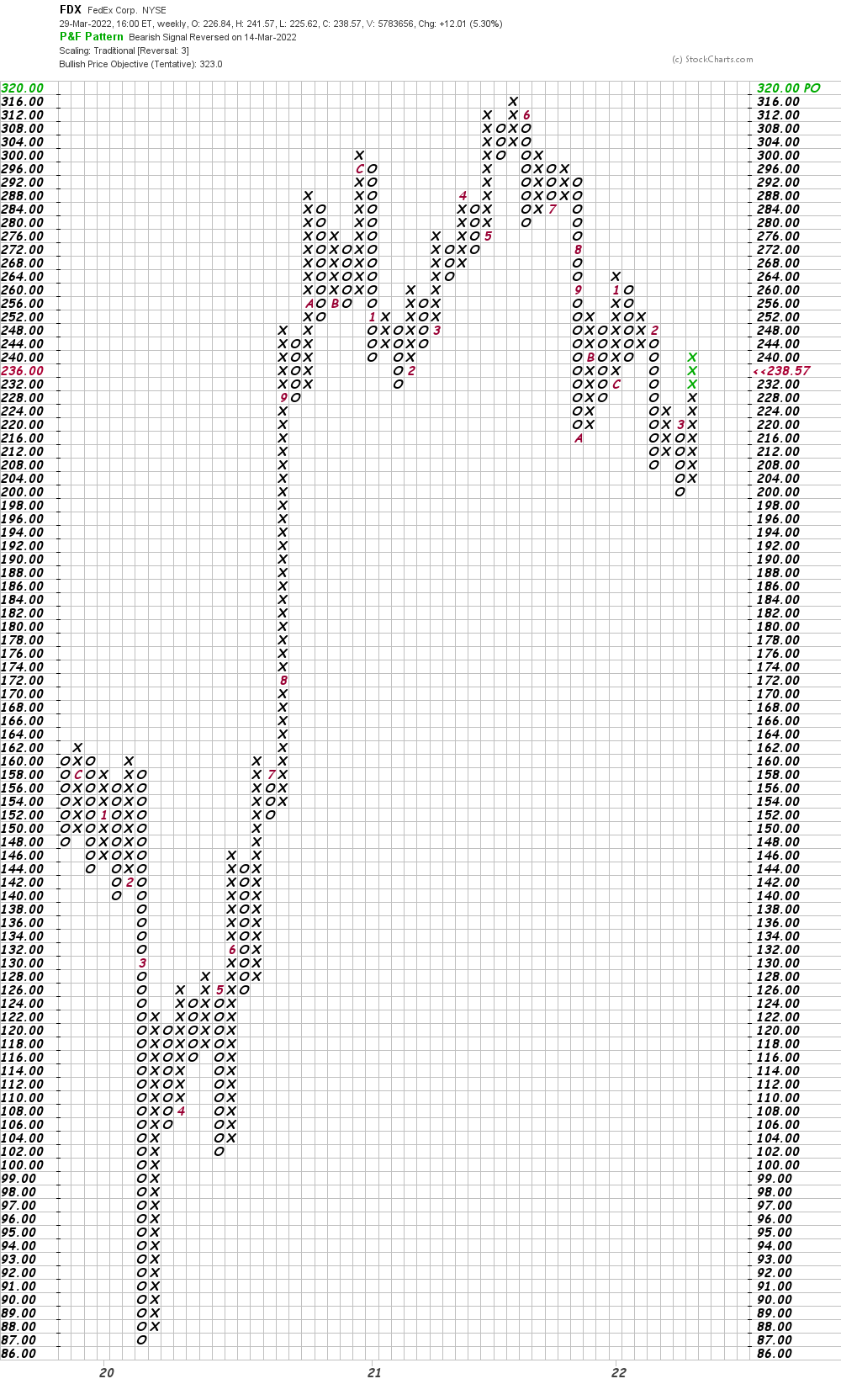 Bottom line strategy: The price of FDX has moved up sharply and a pullback is likely, maybe even a retest of the early March low around $200. I may be in a rush to get my packages delivered but I try to be patient when buying stocks. Traders should remain patient and let's see if we get another pullback to buy.

Get an email alert each time I write an article for Real Money. Click the "+Follow" next to my byline to this article.
TAGS: Investing | Stocks | Technical Analysis | Trading | Transportation | E-Commerce | Mad Money | Executive Interview