Give it a reason. There are several. Was it the better than feared quarterly earnings releases offered up by both Apple (AAPL) and Amazon (AMZN) ? Sure. Was it the Fed's seventy-five basis point rate hike last Wednesday? Or was it the BEA's -0.9% (q/q, SAAR) advance estimate for Q2 GDP? That may have been the kicker. Maybe Thursday's data on June inflation had a hand as well. After all, the BEA also provided more information on headline inflation that probably peaked in June, along with data that continues to support the idea that core inflation either peaked in February or March of 2022. Wonder who gave us that in real-time while everyone panicked.

The idea would be that should these probable trends continue through the July and early August data, that the FOMC would then be able to take a little something off of their fastball. Perhaps pivot to an easier posture either at Jackson Hole or at the September meeting. The ongoing political battle over whether or not the US is in recession is futile. By all common understanding until a couple of weeks ago, the US economy is now in recession. The absurd attempt to redefine recession smacks of political desperation.

Remember that the FOMC has increased the Fed Funds Rate by 150 basis points over the past two meetings, and this tightening has not yet been felt by the Main Street economy. A strong labor market that supports a strong consumer has no choice but to weaken from here as the cost of capital increases for small (and large) businesses across the nation.

Even if the Fed were to take a little something off of their fastball, the Fed is still tightening. It's not like these recent rate increases will be unwound prior to being felt by those participating in the economy. The equity market, aside from all of the impacts mentioned above, rallied because Treasury securities rallied. What happened is that markets had priced in more tightening than markets now believe will be necessary. Could another period of TINA be on the way? That can not be ruled out. That said, I think we are a long way from getting there just yet.

A Thing of Beauty

I have written and spoken of the mid-June tradable bottom for a number of weeks now. Last week, the action came to a technical fruition and our P/Ls rejoiced. The S&P 500 gained 4.26% last week. More than that, the index tested its 50 day SMA from above, and catapulted higher into the weekend on elevated trading volume... 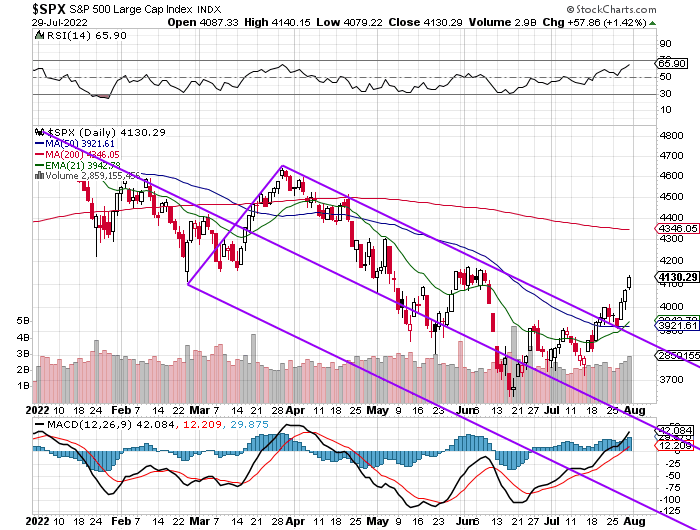 That sound you heard on Thursday and Friday was the sound of portfolio managers increasing net long exposure as the index passed that test and as the 21 day EMA crossed over the 50 day SMA in a swing traders' or mini-golden cross. At this point, short-term traders may look to book some profits. Longer-term investors will likely look to add should the index move toward a second attempt at the 50 day line from above. 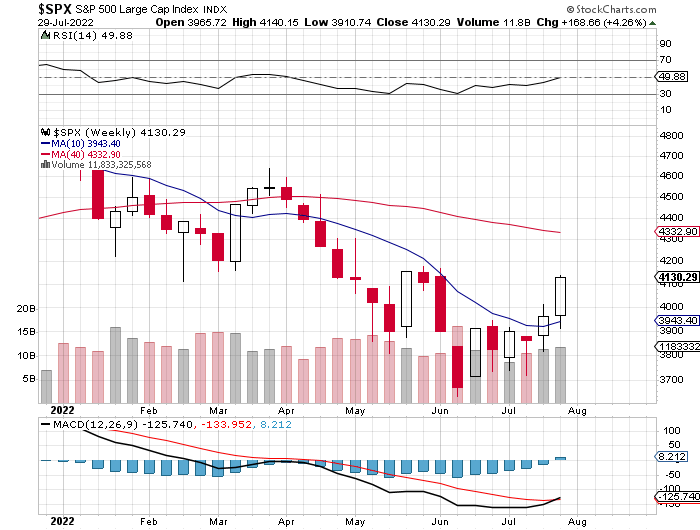 The Nasdaq Composite gained 4.7% last week, and tells largely the same tale. The two major equity indexes have both taken back their 50 day lines, had those lines tested from above and broken out of downward sloping Pitchforks in place for many months defining this year's downtrend... 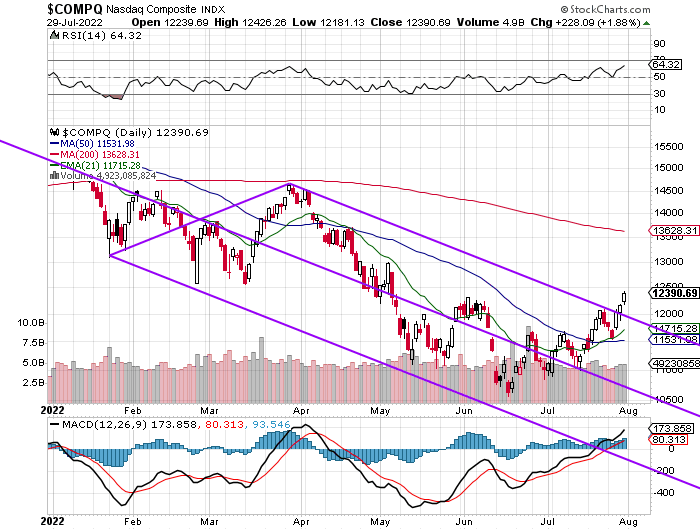 On both of the daily charts, relative strength is really solid, but not yet overbought, while the MACD's both present as positive if not a bit extended from mid-June crossovers that coincided with the market's bottom. The weekly chart of the S&P 500 seen above, interestingly, only experienced that bullish MACD crossover last week, suggesting plenty of room potentially for continued recovery in equities.

So, July handed US equities their best month in the aggregate since 2020. That's nice. The US Ten Year Note along with the entire Treasury yield curve has rallied as well. The US Six month T-Bill yields 2.85% this morning and remains inverted against US One-Year paper. That suggests that the current contraction in US economic activity is not yet done with us. Of course, a central bank pushing up on the short end is a problem for these markets. The Two Year Note, paying 2.90%... remains inverted against everything from the Three Year Note on through the Ten Year, which yields 2.67% at the moment. This signals perhaps years of economic malaise, with or without inflation unless there is at some point, a positive catalyst for change.

That said, second quarter earnings have been better than both feared or expected, but guidance has been very cautious. According to FactSet, with 56% of member companies of the S&P 500 now having reported, the blended (results & projections) rate of earnings growth for the index stands at 6.0%, up from growth of 4.8% just a week ago, when 21% of the index had reported. In addition, still blended, revenue growth is running at 12.3%, up from 10.9% one week ago. That would be cause for celebration, if it were not for what the firms and analysts have done to current quarter expectations at the same time.

Sounds like a bumpy road awaits... all as the S&P 500 wakes up trading at 17.1 times forward looking earnings (partially due to these contracting earnings expectations). The index still resides well below the 18.6 times five year average, but has now caught up to the 17.0 times ten year average. Does that valuation metric itself now become a moving line of resistance? In this algorithmic era of price discovery, that is possible.

Chevron (CVX) reported on Friday morning. To say the long-time Sarge fave crushed it is to understate the magnitude of the out-performance. CVX posted adjusted EPS of $5.82 on revenue of $68.76B. These numbers beat Wall Street by a rough $0.80 and a cool $11B. Just incredible. Cash flow from operations reached $13.8B, while free cash flow hit $10.6B (up from $3.1B for the year ago comp). Let those numbers rattle around the brain for a while.

I have not written to you on Chevron in almost a month's time. At that point, I was a lot less confident. Chevron is the one energy name held at that time that I have not exited nor reduced. (Though I have initiated and increased Occidental Petroleum OXY during that time frame. I don't mind being on the same team as giants.)

We now turn to the chart, with the understanding that OPEC meets this week and energy commodity markets will likely remain volatile. 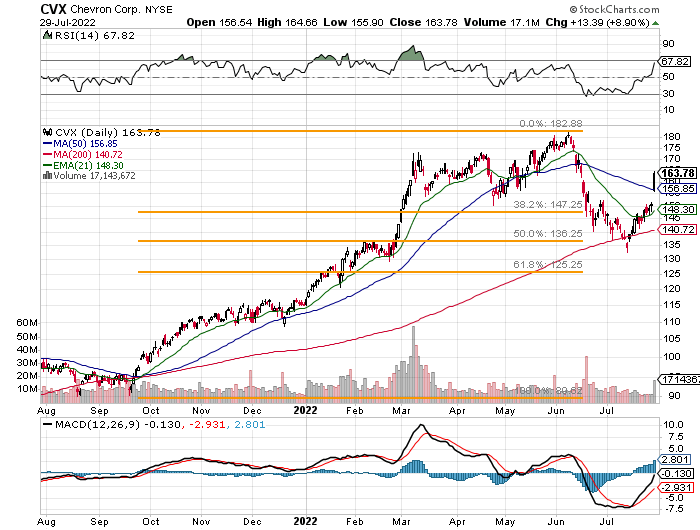 At first glance, it looks as if the stock rallied out of nowhere back in mid-July. Now, we'll zoom in for a closer look... 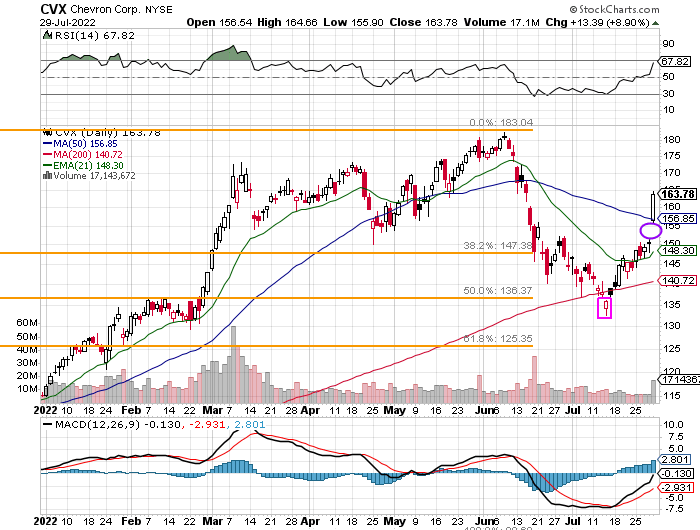 Upon that closer look, we see that the action of July 14th was for what CVX experienced in isolation, creating a (technical) island. Less that specific day, support was found in late June and mid-July at the $136 level, which just happens to be almost an exact 50% retracement of the October through June rally and also happens to be where the 200 day SMA was at that time.

Now, the stock has retaken its 21 day EMA, and on Friday, its 50 day SMA in an act of post-earnings violence that created an unfilled gap between $151 and $156. Does support lock in at the 50 day SMA as portfolio managers are pulled off of the sidelines? Does that unfilled gap have to be filled? Unfilled gaps usually do fill, but they do not have to fill on anyone's timeline.

Relative strength is strong, relatively (get it?), but not yet overbought. Turning to the daily MACD, while postured bullishly, both the 12 day and 26 day EMAs still reside below the zero bound, meaning that there could be room to run.

My plan is to pull my panic point up to $155 (break of the 50 day SMA, entry into unfilled territory), while stamping the $182 level as my target for now. Understand that $182 would not be a means to an end. That spot would merely complete what would at that time be a cup pattern. We would then have to decide if the stock would or would not add a handle, creating an environment where $182 becomes the pivot.

(Apple and Amazon are holdings in the Action Alerts PLUS member club. Want to be alerted before AAP buys or sells these stocks? Learn more now.)

Get an email alert each time I write an article for Real Money. Click the "+Follow" next to my byline to this article.
TAGS: Earnings | Economic Data | Economy | Federal Reserve | Indexes | Investing | Markets | Oil | Stocks | Technical Analysis | Trading

Graphite is an essential component of electric vehicle batteries and these two micro-cap stocks are maneuvering to satisfy demand for it.