Financial GPS. Where are we? Since equity markets bottomed on March 23rd, and we then confirmed the current uptrend just a few days later, we (there is no "we", I am but one man) have cautioned often. The rally almost seems surreal. Yet, even when faced with convincing selloffs here and there, we have never pulled the trigger on "officially" (there is no such thing) changing our view on the trajectory of trend. Not even after last Thursday, which was a terrific beating on extremely convincing breadth. Why would that be?

Simple, form a statistical perspective, there has never been any profound follow-through, at least not for the Nasdaq Composite. The S&P 500 did follow through last week, as that index put together a three day losing streak. Yet, the heaviest day of those three, the one that created the gap now being filled... 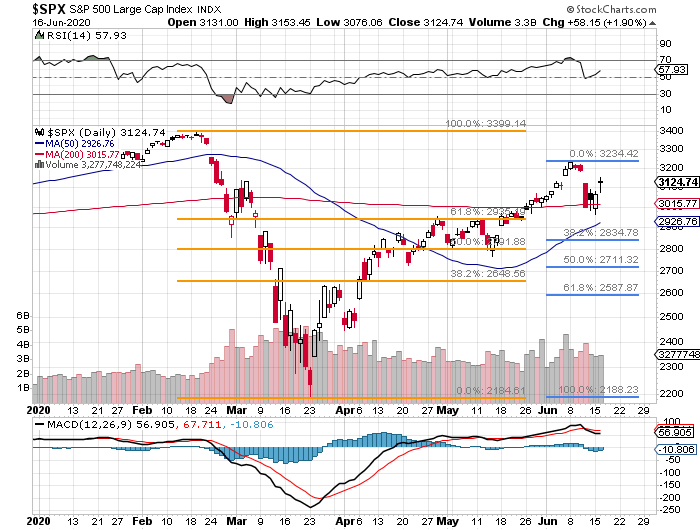 ... fell far short (in terms of trading volume) of the peak purchasing day that had preceded it, while also finding footing at the 200 day SMA that this index managed to best on three successive days of testing. I'll be honest. This was a close call, and I probably would have amended my outlook for trend if the Nasdaq Composite had agreed, which it did not. The Composite has now posted 14 "up" days in the last 17 trading sessions, and has not posted back to back "down" days in more than a month. In fact, with just a little help this morning, the Nasdaq Composite now stands little more than 100 points from completely erasing the ugliness of last Thursday.

As for Tuesday, trading volumes were in line with Monday's action. All 11 sectors moved in a northerly direction. Energy led the way, but that leadership was followed closely by the Health Care sector, propped up by the pharmaceuticals after a rather simplistic "breakthrough" had been made in clinical testing that would improve survivability for patients suffering severe cases of Covid-19. Information Technology and Discretionary type names (after an incredibly robust print for May Retail Sales) also outperformed.

In addition, we have been talking about elevated cash levels for some time now. If you read the Wall Street Journal on Monday, you know that Fidelity Investments can show data suggesting that almost one third of all investors aged 65 years or greater had sold all of their equity holdings between February and May. In addition, that same data also suggests that 18% of investors regardless of age, did the same. Incredible.

Now those of us who do this sort of thing for a living do not exactly go about things the same way as do folks who maybe do something else occupationally. There are investors who get out when they are nervous and back in when it appears that the waters may have calmed. I will use Apple (AAPL) as an example because this is one that I traded, instead of owning, and I missed a timely reentry. My intention was to repurchase the shares below $300. The swing, the miss. The shares now trade at $352+.

Have I been flat the name since early May when that level broke, or since mid-May when it was tested for the last (so far) time? Of course not. In fact, I have instead shorted the shares and bought them back as the shares have recently done the wiggle. That trade has been workable. My point is that I don't chase. I just can't do it, but I can trade. While those who bought and held will enjoy the meal, traders can still find something to eat. Even when they screw up their own plan. The only ones who truly miss entire moves are the ones who move "all out, and then "all in". These moves are provoked by fear itself, and then fear of missing out... on alpha. Because of Beta. The eternal search for yield. Conviction produces bulls and/or bears. Agility produces durability. Fear? Fear gets slaughtered.

What we learned on Tuesday, and will hear again on Wednesday, is that Fed Chair Jerome Powell just does not sound all that confident in the U.S. economy. Can not fault the man for how he feels. He reads his thoughts, and his thoughts are well prepared, but if anyone is well aware of just how far the Fed is willing to go, in order to provide a stable bedrock for an economic rebirth to take root, it would be the one in charge at the nation's central bank.

The recent data has been shading positively. Of that, there is no doubt. Job creation was far better than expected for May, regardless of how those laborers now idled are classified. Retail Sales for the same month were truly impressive relative to consensus view. On these developments, Powell said, "Levels of output and employment remain far below their pre-pandemic levels and significant uncertainty remains about the timing and strength of the recovery." Then, Powell got real... "Until the public is confident that the disease is contained, a full recovery is unlikely." This, we understand.

He is, of course, correct. The Fed can create liquidity through expansion of money supply and then plug holes with that creation. The now launched plan to purchase corporate debt is a good example. Need some dough? Decent enough credit rating, at least pre-pandemic? Issue what you need? There will be a bid. This certainly helps support equity markets as this primarily provides a lifeline for larger, or public companies.

While the guy on the corner who has 25 tables inside his neighborhood pub is trying to figure out how to get five or six of those tables out onto the sidewalk, he may or may not have tapped the PPP program. If not, he has already had to let go three quarters of his staff. The other one quarter will work fewer hours, and wind up underemployed. He can not issue debt. He can borrow, but who would lend? Right now?

There will be increased fiscal help. Later this summer. There will be squabbling over spending, but in the end, in an election year, neither side will be willing to be seen as doing less than they could have. The infrastructure spend that we spoke of on Tuesday will be part of that. There will have to be some kind of vehicle created to ease the unemployed off of the extra $600 per week that they are now being paid by the federal government. There will be more debt created in place of cash flow. Debt can do that for a while, debt does not create solvency. That condition has to take root somewhere, even in the realm of the artificial, before there can be growth. Organic growth.

What the world does not need right now is a military confrontation between the world's two most populous nations. As Chinese and Indian troops have clashed in the Himalayas, it appears that both sides have taken casualties. Multiple fatalities among them. What is truly incredible is that both sides have in the past agreed to patrol the area without firearms. This "battle" appears to have taken place hand to hand or with improvised weaponry.

While the manner in which the two sides went about this fight may or may not matter, the fact that the two sides are willing to fight like that, expresses a level of conviction not often seen on the modern battlefield. Both nations are huge. Both nations have their problems. Both nations are armed at the nuclear level. This needs to settle without further escalation. In the meantime, the global economy watches the outbreak of Covid-19 in the Chinese capital city of Beijing.

Being I have already mentioned Apple... Two highly rated sell-side analysts stated their opinion on Tuesday, that Apple would launch the iPhone 12 series on time, by September. One would be Citigroup's Jim Suva, who maintained his "buy" rating on AAPL while increasing his price target from $310 to $400. The other would be Daniel Ives of Wedbush Securities who reiterated his own "outperform" rating for AAPL as well as his $375 price target. The key takeaways from the double dose of opinion, as far as I can tell, is that Apple's supply chains are recovering faster than expected. Shipments may be delayed but not launch itself. Interestingly, these phones may be sold without wired earbuds.

I have questions. One, will anyone be willing to pay a grand (or more) for a smart phone in 2020/2021? Two, does forcing new users into more expensive wireless AirPods, increase ancillary hardware demand? Or simply drive already insolvent consumers elsewhere. My simple thought, as an Apple consumer, is that plans to offer a quality phone to the budget conscious consumer had better stay on track as well.

Get an email alert each time I write an article for Real Money. Click the "+Follow" next to my byline to this article.
TAGS: Economy | Federal Reserve | Investing | Markets | Stocks | Technical Analysis | Trading | Software & Services | Technology Hardware & Equipment | China