Twas The Night Before

They left in their trances, as they moved up and down Wall Street

Most all portfolios had been allocated with care

In the hopes that the Fed Chair soon would be there.

The traders all prepped as they rose from their beds

Visions of profits had passed through their heads

He spoke nothing but words as he went to the Hill.

It was when I saw that look in his eye, and that twist of his head,

That left me quite unsure if you and I still have something to dread.

It did appear to me that traders became more confident as the day wore on. Most overtly, the broader indices turned early morning selloffs into positive looking closes. The Nasdaq Composite would be the day's outperformer, but not so much on tech strength, more on weakness across the Materials sector that impacted such sector heavyweights as DuPont de Nemours (DD) , Dow (DOW) and LyondellBasell (LYB) on the heels of the profit warning that had been dished out by German chemical manufacturer BASF (BASFY) .

I think also of note would be that the Dow Transports showed weakness ahead of the Chair's twin testimonies, having surrendered the 50 day SMA just days after recapturing that level. In fact, on weakness across both railroads and airlines, the index flirted with failing the 200 day line before finding support. The Transports stand just 24 points away from a "death cross" on Wednesday morning. That's a growth issue, most likely provoked not just by the now semi-long term sustained inversion of the Treasury yield curve but models released at both the New York and Cleveland Federal Reserve Banks that show the highest percentage chance (at about 33%) for a recession at some point in the next 12 months since 2007. Of course, by the time the Fed screams of an imminent recession, the common folk will be up to their elbows in alligators, and rattlesnakes.

Of course, one might discard such as a signal, as the "golden cross" experienced by this index in late April signaled exactly nothing.

At 10 am in Washington D.C., the tradition begins anew. The Fed Chair begins a two day odyssey that will result in the answering of questions that at different times will be earnest, politically astute and in many cases, quite infantile testing the patience of those of us who must listen. Interestingly, since the robust looking numbers for June job creation were released by the BLS last Friday, what the U.S. 10 Year note yields has run from 1.94% to this morning's 2.10%. Sixteen basis points in three business days. That's pretty darned aggressive. Let me clue you in. Yields surrendered by 10 year German Bunds have moved from -40 basis points to -27 bp over the same period. German/European buyers always show up for the U.S. 10 year at a rough 240 basis point discount to the German variety. Always. That's where it makes sense for them to seek yield, and that's what that move is all about. It's not about us at all. Then ECB takes those bunds to -0.75%, and U.S. 10 year notes will go to 1.65%. Bet some of you didn't even know that. Now, you do. Now pack up. Full battle rattle.

All this while in Chicago, futures pricing the probable Fed Funds Rates of tomorrow and beyond, while still pricing in a 99% chance of a reduction of 25 basis points on July 31. There is no longer any probability for a 50 basis point cut, and there is now a ghost of a chance that there would be no cut made at all. That slight chance having been just not there days ago, was given a boost on Tuesday by Philadelphia Fed President Patrick Harker who favors a wait and see approach for now. Harker does not vote on policy this year, but does have a reputation for being pragmatic, and is respected. My guess is that he has the ear of many. Keep in mind that James Bullard speaks today. He's been an ally for the bulls, and he votes.

Let's be clear. It would be incredibly difficult to argue that the central bank has failed to achieve either price stability or maximum sustainable employment. In fact, while I myself am often critical of not only this Fed, but nearly every single iteration of our central bank, their policies in recent years have simply resulted in accomplishing their stated mandate. The problem is that the mission has moved beyond the mandate. Price stability at a discount has been achieved at a time when there was an overt attempt made to promote consumer level inflation. A better, higher level of maximum sustainable employment had been reached years after the central bank had foolishly proclaimed a state of "full employment" across the land. What has been clear is that fiscal policy pushed employment levels higher, and nobody and I mean nobody at the central bank has any idea how much slack there really is in either labor markets, or the economy itself.

The Fed already set the table for lower short-term interest rates. This afternoon, we'll see the Minutes from that policy meeting. This morning, Jerome Powell must either endorse, or reset market expectations for a move in three weeks' time. Have the primary reasons for such a reduction changed much? Consumer level inflation is still considered sub-optimal. Global economic growth remains pathetic, which in turn means that enemy central banks are likely to ease, thus laying the groundwork for a currency war. Trade remains uncertain, though the U.S. and China have reached a truce for the time being. Those conditions are stable. The one big change is in the perception of labor markets, but let's use our heads if we might. Strength in labor markets is not sustainable without support in such niceties as New Orders, Capital Expenditures, Industrial Production, and housing. Each and every one of these matters is subject to conditions that are starting to impact confidence.

My opinion is this. Repairing the yield curve normalizes credit conditions that in turn allow for a better assessment of risk moving forward. That itself lays the groundwork for sustained confidence at higher levels. Listen here, either you jack the long end, or you flatten the short end. I am okay with either, but those pesky Europeans... Oh, and allowing foreign central banks to deflate their currencies in relative terms would put the whammy on the S&P 500. Got it? There is a real chance that Powell tries to allow the Quantitative Program to run it's course into September prior to reducing the Fed Funds Rate. Markets would react badly to such signaling. Reducing the FFR 25 basis points and putting a full stop to the balance sheet management program in July is the best that the bulls can hope for. I do believe it also to be the wisest option available at this time. Trust me? The Fed should, and I'd rather die than hurt you. 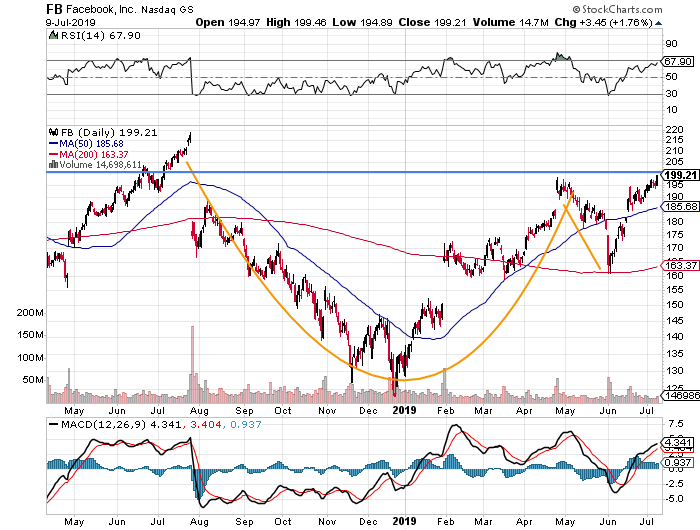 Facebook (FB) stands at a technical pivot coming out of a gigantic cup with handle. Given the depth of both the cup and the handle, this spot could either end up as a double top, or a catapult. Though I can not stand the management team here, it is hard to argue the success of the advertising business, not the ingenuity of the crypto-idea aimed at a captive audience. Regulation may get in the way. I have held my nose and gone long this name. 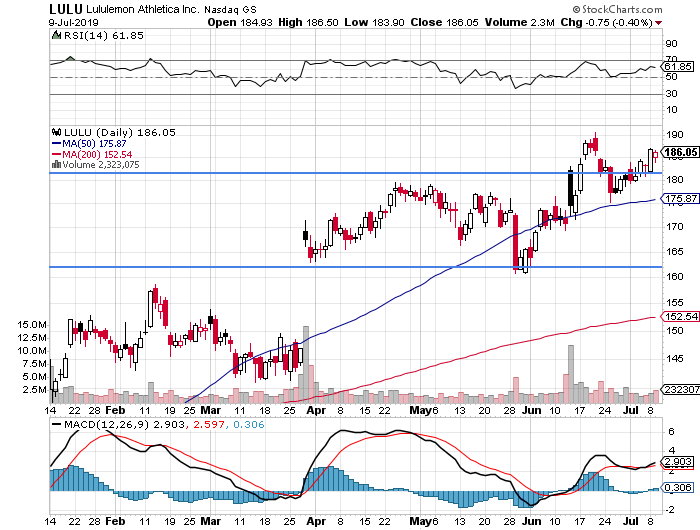 Lululemon (LULU) flirts with a breakout after consolidating post-earnings in early June. Another double top? Support visible at the 50 day SMA. I have not yet re-entered, but am strongly considering such action. September $190 calls are running at about $10.25. A trader could buy the equity here, and sell those, in order to wind up with a net basis that lands almost precisely at that 50 day line. Just one of the ideas rattling around my cavernous head.

Get an email alert each time I write an article for Real Money. Click the "+Follow" next to my byline to this article.
TAGS: Federal Reserve | Interest Rates | Investing | Markets | Options | Stocks | Technical Analysis | Trading | Treasury Bonds