Far more slowly than one might think, we worked our way upstream. The clean smell of the sea melting into the unwelcome odor of a half rotten jungle. Maybe if not quite so swift, still very silent. Black tape over everything metal, painted faces, ears, teeth in order to matte the potential glint of moonlight should the cloud cover break. Night vision? Still more than a decade away. Mostly we hung on to the sides of our heavily camouflaged, gear laden craft, in order to keep a low profile. Just enough visibility to breathe. How does muddy water taste in the dark? I'd prefer iced tea, on a breezy summer's afternoon. At least if you still taste some salt, the water is still brackish... one can kid oneself that there might be less parasitic content than there probably is. Looking forward to crawling through the soft, disgusting mud once we get there. Not. Hate snakes. Why are there always snakes? At least these boots have vents. That will keep me from rotting. That mud will kill our scent.

The S&P 500 gave up nearly six points on Wednesday. What might be highly important here would be the support that this broadest of large cap indices found at 2874 just around lunchtime. Just above the 50 day SMA (simple moving average) of 2873. That line, as you know, can often provoke the inert among us to take action, depending upon the emotion of the moment, or the risk perception of a given day that can then create momentum. The Dow Jones Industrial Average did pass through the line twice one time in each direction. That matters not to the flow of money.

Many retail investors, who occupationally, do something away from finance are fooled into watching this blue chip index more closely than necessary due to the attention placed upon it by the media. Trust your pal Sarge on this. This index correlates well to the S&P 500 over time, not the other way around. No human traders react to what this index does in real time, and very few algorithms are written to do so, as very few ETFs bother to track it. The Nasdaq Composite, nearly as important for investors to focus upon as the S&P 500, still needs to retake the 50 day (2860). This may prove more difficult as the index is a bit tech heavy, and due to slowing global growth exacerbated by increased uncertainty over the future of cross-border commerce, not to mention the likelihood of a regulatory environment that grows somewhat problematic.

Where does this leave us? Just along for the ride? Equity markets have largely moved sideways this week after last week's meteoric ride. While I promise nothing, as there has been some automatic profit taking, there has not yet been a sizable selloff. I find this sudden basing to be short-term positive. On Wednesday, London's ETFGI reported that equity ETFs experienced global net outflows of $19.1 billion. This supports a report published last week by State Street Advisors that equity ETFs had suffered outflows of $19.9 billion for the month of May, which would be a record, surpassing the $19.7 billion hickey that hit the marketplace in January of 2014.

As we have covered extensively, some of this money has moved into Treasury debt and gold, but a lot of it is likely still out there, and the longer this market moves sideways, the greater the chance that this cash trickles back in, even without the gift of a significant drawback. ETFs may be passive in nature, but the flow that ETFs depend upon? Not so much. The longer this takes, the greater the pressure to at least "market perform."

May CPI printed a tad cooler than even expected. Yields on the long end have already started to contract after their mini joyride. The Atlanta Fed will update their snapshot of Q2 GDP sometime on Friday after the Census Bureau releases data for May Retail Sales, and the Fed releases their numbers for May Industrial Production. That GDP model stands at growth of 1.4% right now, but has not been updated in nearly a week's time. The probability of a reduction in the Fed Funds Rate by July 31st now stands at 87% as priced in by futures markets trading in Chicago. There in lies your risk. This is due to Fed signalling. This is why some of those around you are rooting for lousy macro. While markets have already at least partially priced in this first cut, there would have to be an unwind, in particular for the U.S. dollar, should the Fed take a pass, or once again, change their public stance at the June meeting.

It's not just slowing domestic economic growth. The Fed has in overt terms, met their dual mandate. Prices are stable. Both the economy and the labor force have sustained a high level of employment. The Fed also has a greater responsibility in my opinion to their country. To their people. The FOMC simply must act in order to make some kind of sentient attempt to repair the yield curve, as well as to act in such a manner as to prevent the recent dollar weakness from retracing. Yes, I know... the stronger dollar attracts cross border capital investment. Spare me. I am not asking for zero, or negative interest rates. I am not even asking for quantitative easing, though I have heard intelligent people mention this possibility of late. I simply want the obvious error corrected.

Never mind the U.S. Treasury's auctioning off of 10 year paper on Wednesday that saw bid to cover return to normal levels. Of course some demand returned. Earlier Wednesday morning the Bundesbank held a similar auction, only in Germany, the deal went off at the lowest yield in history at -0.24%. Yup, every single individual who lent the German government money yesterday, if held to maturity has now guaranteed themselves a loss of nearly a quarter of a percent. I don't know, maybe you don't have a mattress? How about an old ammo can? I'll take divergent monetary policies for a thousand, Alex. Not wise.

Greg Ip of the Wall Street Journal cited J.P. Morgan in his column on Wednesday. According to J.P. Morgan, the probability of an actual recession in the next 12 months is now 42% based on the macro, and 60% based on the yield curve. That number normally stands at 17%. Is it time to panic? No. We never panic. We Understand, Identify, Adapt, Overcome, and then Maintain in that order. Why? Because we are undefeated, and unless we surrender, we always will be. Easy solution. Don't surrender. That said, data dependency simply means to respond to a fire after it has broken out. The time to be pro-active is when there is only a threat of fire. Who can be great? We can be great. Make it so.

RH (RH) reported the firm's Q1 results on Wednesday evening. Did they ever? EPS printed at $1.85, beating the street by 32 cents. Revenue generation grew by 7.4% year over year, also beating projections. Am I impressed? Yes, I am. Let me tell you why.

First and foremost, as the firm eagerly tells us, they are growing revenues, expanding margins, increasing operating earnings,and driving significantly higher returns on invested capital. You may recall that amid a dire outlook for high end housing markets, this retailer had cut full year guidance three months ago. How now? Completely different. RH expects full year EPS to now end up somewhere in between $8.76 and $9.27, the lower bound now above the higher bound of prior guidance. Wall Street consensus had been in the $8.30's. Full year net sales are now being guided to a range spanning from $2.642 billion to $2.662 billion. Again, the new low end of the range stands above the old high end. Analyst view had been for something in the area of $2.605 billion. Can you say huzzah?

Secondly, the firm is adjusting to, and had adjusted to the trade war between the U.S. and China. The firm has "selectively raised prices", and has stated the intent to move some production out of China to manufacturing centers in the U.S. President Trump is going to love these guys. Oh, and by the way, the firm says that any costs associated with the trade conflict between the planet's two largest economies is already factored into the numbers.

While debt is still a bit out of control, I am glad to see that the firm's cash position has more than been rebuilt. The shares under the new guidance are undervalued, especially given the recent explosion, if it can be sustained in mortgage applications. 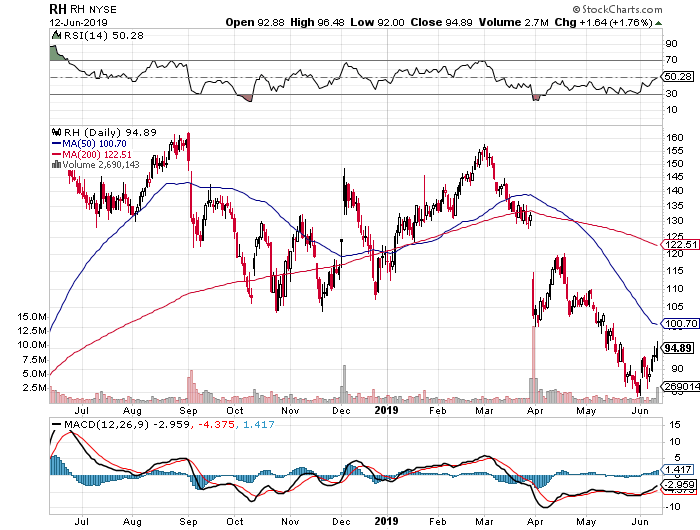 I now like this name. The revised guidance, and the willingness to adapt to the trade war make this firm special in my opinion. You will see in the disclosure that I am short this name. Understand that I am a trader. That is a short-term position taken in overnight trading at the $120 level, where I would expect April resistance to possibly reemerge. My plan would be to buy those back around $110, where there has been traffic in the recent past. My panic point would be a break above the 200 day SMA, but this is a smallish position, so not a lot of risk in the trade. At $110, depending on intra-day technicals, I would think I add more shares than I am currently short. Other than that, we'll see where puts expiring three months out are priced after the open for a possible sale.

Get an email alert each time I write an article for Real Money. Click the "+Follow" next to my byline to this article.
TAGS: Earnings | Federal Reserve | Interest Rates | Investing | Markets | Options | Stocks | Technical Analysis | Trading | Retail

It's 'The New New Thing' All Over Again