Did you think I would criticize? Nope. Can't do that. Not when the central bank does precisely as you would have them do. That said, they (those at the FOMC) are... doing what exactly what I would do.

The Bureau of Economic Analysis posted a better than expected growth rate of 1.9% for the third quarter. Understand that that is the quarter over quarter and then annualized advance estimate that will be revised twice (at least). The takeaway? The consumer, though less aggressive than in the very recent past, remains robust. There was surely some weakness, otherwise we would not be talking about 1.9% like it was something special.

The overt softness was to be found in Gross Private Domestic Investment. Contraction in non-residential structures and equipment. Heck, we already knew that from the monthly data provided on Industrial Production and Durable Goods orders. Business spending has been weakened by a softer demand created by a wobbly global economy coupled by uncertain domestic ground rules. That would be a direct business level response to tougher conditions for cross-border commerce. While the trade conflict with China may or may not have been inevitable... it does appear (especially after disastrous Chinese October manufacturing PMI numbers released last night) that this condition might be quite reparable. I do think this Fed Chair "gets" this. I do think that this Fed Chair has learned to be cautious, in reflection of the policy errors made in late 2018.

So, it is that the Fed made the obvious move that had been well telegraphed. The targeted range for the overnight Fed Funds Rate was reduced on Wednesday to 1.5% to 1.75%. Futures markets are not realistically pricing in any next move by the Fed on overnight rates. As maybe it should be.

As usual, the Federal Reserve released an official policy statement. The statement, as has been common practice for some time now, had been mostly copied and pasted from the most recent prior statement. There was really just one big edit made. Apparently, instead of monitoring incoming information in order to "act as appropriate to sustain the expansion", the Fed will now monitor that information "as it assesses the appropriate path" for the FFR. The implication would be clear. The Fed, from this point will use a high bar as a measuring rod, where as action in either direction might be concerned.

Makes sense? You bet it does. While I will admit that with the 30 day T-Bill giving up 1.59% on Wednesday evening, I can easily see good reason for one more technical reduction to be made to a targeted range for the rate which banks will lend each other cash for overnight purposes. Why not get the high end of an overnight rate (hopefully) below the market based rate for 30 day paper? Unless, the central bank sees policy in a "good place', as an economy that struggles in real time shows clear signs of a potentially bullish (the economy, not the markets, but they can go hand in hand) set-up.

After all, as the Fed moves along with their $60 billion per month balance sheet expansion program specifically targeting T-Bills, the U.S. central bank not only adds necessary liquidity to those overnight markets, effectively capping those rates if successful but taking control of short-term rates (everything maturing in 12 months or less) across the entire economy.

The Fed claims that this program is not QE (quantitative easing) and it is not. There are some first level thinkers bouncing around the financial media who can't see the difference, but the difference is enormous. Unlike in past balance sheet expansion programs, there is no effort being made to suppress long-term yields. In fact, it appears to be just the opposite. The Fed appears to understand after learning from the failures of a lost decade that the slope of the Treasury curve remains as it always has... a key ingredient in maintaining growth across such a large economy. The Fed has handed control over the long end of the curve over to the bond market, and I could not agree with this policy stance any more.

While the long end of the U.S. Treasury curve will likely face artificial pressure created abroad, even that worm may turn. Foreign central banks appear, not that Mario Draghi has left Brussels, to understand the punitive impact that negative interest rates price into popular behavior.

Does this mean that we are witnessing a rebirth in free market pricing? That may be me just being me. That said, at the risk of being called a Pollyanna, I find current events quite constructive.

Of course, this entire aura of positivity will fade to black should the U.S. and China move further apart on trade negotiations. Bloomberg TV is reporting this morning that doubts are coming from the Chinese side about reaching a long-term deal. It does not help that equity markets now trade at the top of their "forever" charts, and that the Chilean government has had to cancel the APEC summit scheduled for mid-November where Presidents Trump and Xi were supposedly going to meet and perhaps finalize a Phase One trade deal.

I understand. I could be wrong. There will be a number of various realities that hit markets on Thursday, beside a stray headline here or there. Heck, it is "earnings season", and tomorrow (Friday) is "Jobs Day."

That all said, on Wednesday afternoon, in response to what the FOMC did and wrote and also in response to what Jerome Powell said... equities and bonds rallied, while U.S dollar exchange rates weakened, which in turn forced Gold higher. In other words, markets responded as they would in the past to a "dovish" policy statement.

Think about that. There are enough outlets calling the day's events a "hawkish cut", but that is inaccurate. The Fed took clearly appropriate action while still quite aggressively adding liquidity that targets the right spots.. and get this... Jerome Powell infers that the Fed will not tighten policy without a sustained need to fight inflation. Need more than that? Yes, I know. You need a trade deal. Gotcha.

So, what do you kids want to talk about? Apple (AAPL) ? Oh, yeah. Facebook (FB) ? Hmm. Nice one. Starbucks (SBUX) ? Didn't see that one coming. How about Twilio (TWLO) . Gross. Well, I am long a few shares of that one, and I am getting hit in the mush. Can't just talk about the winners. Let's do Twilio. I am guessing that some of you are also wearing some of this.

Twilio reported third quarter financial results that don't seem too bad at surface level. The firm posted adjusted EPS of $0.03, down from $0.07 one year ago, but better than consensus. Revenue at $295.1 million, printed up 74.7% and also beat expectations. There is some good here. No doubt. Active customer accounts ended the quarter at 172K, more than doubling over the past 12 months, and beating consensus of less than 168K. This number includes the SendGrid acquisition, completed in February.

Now, what the firm is calling it's Dollar-Based Net Expansion Rate, or what you and I might call an "active customer revenue generation growth rate" slowed. This number printed at 132%, which sounds good, but is down from 145% last year, and also below consensus of 138%. Going through the financial tables, there are a couple of items that give reason for pause. No, the cash position is fine and the firm will, I believe very comfortably meet all obligations. So, nothing like that. Total operating expenses increased 116% year over year to $252.8 million. Now, recall that revenue for the quarter came to $295.1 million. Hmm. Margin? Don't ask. Operating loss printed at $94.7 million, down from a loss of $25 million one year ago. Turning to the balance sheet, assets and liabilities counter each other at roughly $5.1 billion. The entry for "goodwill" stands at about $2.28 billion, or 44.7% of total assets. One year ago, admittedly, the balance sheet was only one fifth the size that is is now, but the firm only needed a 3.6% contribution from "goodwill" to balance the books. Color me unimpressed.

Moving forward, the firm reduced fourth quarter guidance below consensus for both earnings and revenue. The firm also narrowed the expected range for full year expectations. 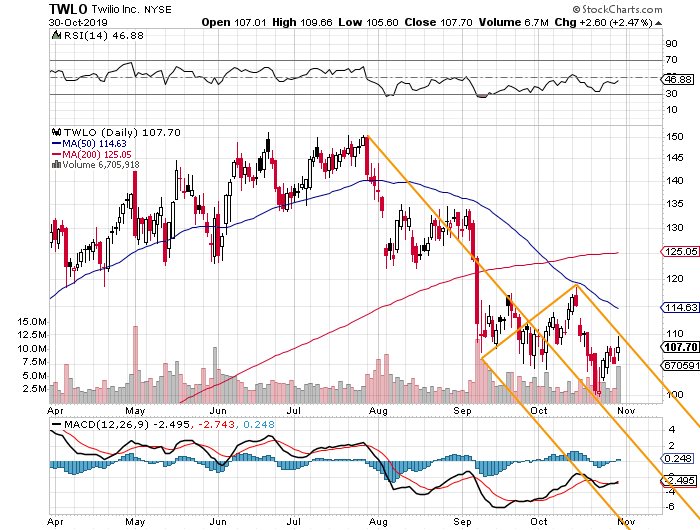 The Chart speaks for itself. Gratefully, I am only into this name for one-eighth of what I had originally intended to be a full position. My net basis is currently $112.33. My instinct at first was to add a full 25% of my intended position in dollar terms, in order to pull net basis toward the last sale. I'm not feeling that. My panic point had been $103, and we have had enough winners of late to afford taking a loser. The tax year might need one or five. Still doing that math.

I think, given the likelihood that the shares will open below my panic point on a gap lower, I will refrain from panicking. Not my style anyway. I will give these shares a chance to feel around for support around par ($100), but make no mistake... I do not need TWLO on my book, and would hardly notice their exile.

No public events scheduled this day.

(Apple, Facebook and Twilio are holdings in Jim Cramer's Action Alerts PLUS member club. Want to be alerted before Jim Cramer buys or sells these stocks? Learn more now.)

Get an email alert each time I write an article for Real Money. Click the "+Follow" next to my byline to this article.
TAGS: Earnings | Economic Data | Federal Reserve | Interest Rates | Investing | Markets | Stocks | Technical Analysis | Trading | Software & Services