Thy leaves have ripened to the fall;

Tomorrow's wind, if it be wild,

Should waste them all.

The crows above the forest call;

Tomorrow they may form and go.

Let me tell you about September. In September, the FOMC increased the Fed's target for the Fed Funds Rate by another 75 basis points on the 21st, bringing the range for said target up to 3% to 3.25%. Word, spread by the many Fed speakers that crawled out of their cages especially later in the month, was that the Fed would keep on keeping on, regardless of national macroeconomic performance, or lack thereof.

Not only was consumer level inflation a monster that must be defeated, though there is some evidence away from the most closely followed data-points that cover the subject that show inflation to be past peak, but the Fed would have to remain hawkish on policy for quite some time even after defeating that monster. Just to make sure he's really gone.

So, an FOMC that historically overstays its welcome in either policy direction, intends not only to remain hawkish until something breaks, but according to their own rhetoric, to remain hawkish beyond that point. It's been and is a frontal assault on the economy, and on peer (as well as non-peer) reserve currencies.

The entire committee to include those not voting this year, has united and in robotic form, turned rabidly hawkish despite what for many individuals involved is an overtly dovish history. Whether this is really all about fighting inflation, or as I have inferred in my recent works, also about something else, perhaps some kind of modern currency war, the fact is that debt and equity markets are not only starting to break, they have been routed.

How about our dear friend, the Philadelphia Semiconductor Index? Down 4.24% last week and down 13.85% for the month. Broadly, this was the worst September for US equities in 20 years. Mind you September is the only negative month on average for the S&P 500 over the past 40 years, so, this was quite the accomplishment.

For the month, all 11 S&P SPDR sector-select ETFs finished in the red. The Health Care (XLV) sector was easily the upside leader, down just 3.16%, The Financials (XLF) finished distantly in second place at -8.35%. Seven of these sector SPDRs gave up at least 10% for September, led to the downside by the REITs (XLRE) and our old pal, Technology (XLK) . Those two funds took beatings of 13.48% and 12.82%, respectively.

Is there hope for October? We still have a Federal Reserve stuck in overdrive as the nation and globe fight off not a probable recession, but the depth of the already understood coming of sustained economic hardship. Russia is still in Ukraine, and despite suffering consistent battlefield defeat, has upped the rhetoric, activated veterans and "annexed" territory inside the borders of its neighbor that its military is unable to occupy.

That in some ways makes Russia more dangerous not just to Ukraine but to the entire West. China's economic recovery from the pandemic remains sloppy. By the way, this is "Golden Week" in China, which is a week-long holiday.

October, over the past 40 years, is surprisingly positive on average, even though this period includes the stock market crash of October 1987 as well as the mini-crash of October 1989. Over the past 40 Octobers, the month has closed positive for 25 of them. Using the Trend Spider seasonality tool, I see that those 40 Octobers posted a median return of 1.87% and a mean return of 1.08%. This makes October the second best month at the median over 40 years, being beaten only by November, but only sixth of 12 at the mean.

In the here and now, it does appear to me, at least the broader US equity markets are potentially set up for a technical rally this week. Could this area here become a trade-able bottom? 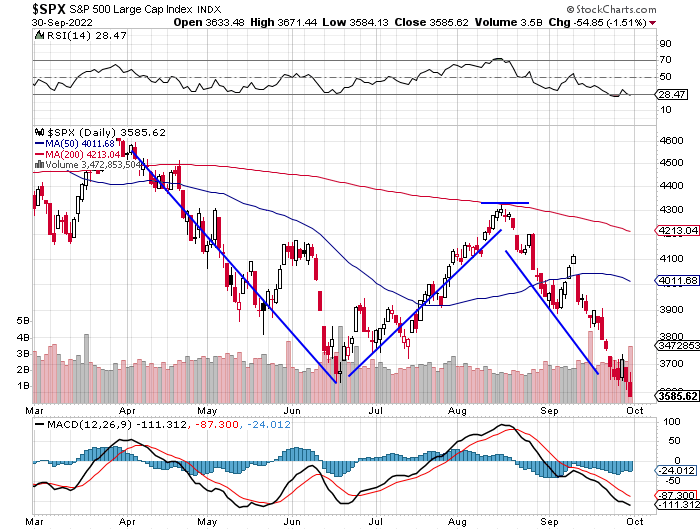 The S&P 500 created a new post-June low last week. That's a negative. However, sentiment is poor. Relative strength and the daily MACD are both awful. Contrarians might point to this chart and see the potential for a "double-bottom" reversal.

That will be up to two things. Federal Reserve rhetoric. I see that nine Fed speakers are set to crawl out of their holes on just Monday and Tuesday this week, and then there are another four on Thursday. On top of that, this is September "Jobs Week." How frustrating is it that in order to get the Fed to slow down on their aggressive policy, we need to see disappointments in job creation and wage growth. That, my friends... is life in early October 2022.

How The Mighty Have Fallen

It's a bit surprising to see the shares of Credit Suisse (CS) trading off just 6% through the wee hours early on Monday morning. The shares had been priced lower in European trading. For those who tune out on weekends, senior executives of the Swiss bank spent Saturday and Sunday calling large clients and investors in an attempt to allay fears over the bank's liquidity and capital position after spreads on the firm's credit default swaps increased sharply on Friday. There were reports circulating that CEO Ulrich Koerner is looking to raise capital. The firm says that it will update progress on its strategy later this month when it reports.

Yes, I am an old First Boston guy. Don't worry for me, I sold all of my shares and related holdings as soon as I could after leaving that firm over 15 years ago. They seem to have only gone down since. I never like to be put in the position of rooting for past employers.

Both WTI and Brent crude oil futures are trading a rough 4% higher on Monday morning as OPEC+ is said to be preparing a production cut of more than 1M barrels per day. The group, which includes the OPEC cartel as well as other non-OPEC producers historically led by Moscow, is set to meet this Wednesday. Don't forget, the US is going to have to refill the SPR. I remain long Chevron (CVX) and Occidental Petroleum (OXY) .

It appears that the Liz Truss government in the UK, after insisting on Sunday that they would go ahead with plans to scrap the 45% tax rate for top earners, will back off of the idea once it became apparent that they had no shot of getting their budget through the House of Commons. This put a bit of a lift in the British Pound, now trading at almost $1.12 after approaching parity with the US Dollar last week. This has allowed the US Dollar Index to trade with a 112 handle this morning after peaking above 114 last week.

Yields for sovereign British debt securities have come in this morning as well, I see the UK Ten Year paying 4.07% on Monday, that yield is down from 4.57% last week. This has also had a positive impact on US debt markets. I see US Ten Year paper paying a rough 3.78% this morning.

According to the latest release from FactSet, Wall Street does get it, and is reducing expectations for the upcoming earnings season that gets going in earnest when the big banks report in about two weeks. According to FactSet, Q3 earnings growth (y/y) expectations for the S&P 500 have been ratcheted down to 2.9% from 3.2% the week prior, and 3.5% and 3.7% for the weeks before that.

The five year average forward looking PE ratio for the S&P 500 is 18.6 times, while the 10 year average would be 17.1 times. As readers can plainly see, the S&P 500 no longer trades near its medium term averages. Then again those averages were built during an era of highly irresponsible fiscal policy enabled by highly irresponsible monetary policy.

No repercussions from spending an economy into a bad spot. No repercussions for facilitating such behavior for far too long. Everyone just keeps on keeping on. Except the working folks. They get kicked in the teeth.

Get an email alert each time I write an article for Real Money. Click the "+Follow" next to my byline to this article.
TAGS: Currencies | Earnings | Economy | Federal Reserve | Investing | Markets | Oil | Stocks | Technical Analysis | Trading | Banking