"They Just Don't Come Through"

Equity markets offered few hints on Tuesday. The session got off to a poor start. The president tried to ratchet up pressure on China as negotiations got under way in Shanghai. The quote above was taken from President Trump's Twitter feed lodging a complaint against China for not having started increasing agricultural goods from U.S. farmers at this point in the trade conflict. Trump obviously felt that this was agreed to. Markets spent the rest of the Tuesday session grinding their way closer to unchanged levels without quite getting there.

The Dow Industrials closed slightly lower for the day, and the S&P 500 gave up one quarter of one percent, yet trading volume at the NYSE actually saw a one day increase of 13.4% from Monday. Amid that higher volume, winners beat losers by a 17-12 margin, and advancing volume beat declining volume by nearly a 4-3 margin. Would not know that just by looking at the indices. Interestingly, the Information Technology sector posted a second consecutive poor day, yet volume at the Nasdaq remained light.

Confession to make. I mentioned in Tuesday's Recon note, that Nasdaq Composite trading volume has not touched it's own 50 day simple moving average since June 28th. That is in error, truth is the date is July 1st, the very next session. I apologize for that error. The point that I tried to make though, is still valid, as Nasdaq Composite trading volume has now spent 20 consecutive sessions at levels below that 50 day SMA. I think that trend, by the way... will end today.

By all reports, talks in Shanghai came to an inconclusive end which, believe it or not, meets market expectations. That positive earnings results from Apple   (AAPL)  , and anticipation for Wednesday afternoon's FOMC policy statement are why equity index futures markets have hung in there fairly well overnight.

"The Fed Is Often Wrong"

The president also opined on monetary policy on Tuesday. However, I think few professionals can possibly argue with this quote. That said, the FOMC appears at this point, without making public acknowledgement, that the majority of those serving on the committee (FOMC) at least understand that they indeed erred on policy in late 2018. I know we have heard from a plethora of first level thinkers this week,constantly opining that the economy does not need a reduction to the Fed Funds Rate. In fact they would be right if the Fed had not forced an inversion of the 3 month T-bill right through the 10 year note. In fact, US 30 year bonds yield less than 50 basis points more than that 90 day paper. Guess the lack of yield over that extra 29 years and 9 months is meaningless to these "lightning rods" of economic thought.

The fact is that the Fed is forced to use the trade war with China, Brexit, and slowing global economies as cover to make the purely technical moves that are necessary to restoring a proper price for short-term credit in this... our domestic economy. Understand that the expected cut today is not about recent economic performance in the least. Understand that yields in the United States are incorrect for the environment provided, which puts the US dollar in a position of peril in terms of upside risk. This is about the yield curve and currency wars. Anyone even talking about data dependency has either completely missed the point, or does not even recognize that the world is a rough place and we are in a real fight. The ECB, the BOJ and the PBOC are not going to play nice going forward. My thought? When one finds that they are in a fight, they should do just that... fight.

The president has also called for an immediate halt to quantitative tightening, which makes sense. If only because it would defy logic to be easing policy with one hand and tightening policy with the other. The plan comes to a planed halt this September. One other point that I want economic neophytes to realize is that the QT program from start to this point has added the estimated impact of almost two full percentage points covertly to what the FOMC has done to short-term rates in terms of overt policy moves. It is nothing short of an economic miracle that the U.S. economy has done what it has done over the past two years given how significantly the monetary condition has changed relative to the planet. The growth realized can be largely attributed to tax reform, and deregulation. There are undeniable issues around fiscal policy that will one day be unavoidable. Believe it or not, I am a fiscal hawk. That fight is tomorrow's battle, not today's.

2) Given that the environment calls for more than a 25 basis point reduction to the FFR, but perhaps less than 50, the time is right for an immediate halt to that QT program.

3) Signal an openness to a future easing of policy while remaining non-committal. Transmission of this message is fraught with danger.

1) Feed off of the press conference. The 25 basis point reduction to the FFR is fully priced into equities, and US dollar valuations. A halt to the QT program may not be, and would be well received. Any reference made to a "one and done" scenario would be taken rather poorly by financial markets as it is widely understood that the ECB will surely follow through with aggressive easing of their own, and the British Pound is now completely unpredictable. There will be some pressure on the U.S. long end, and restoring a healthy slope to the domestic yield curve will likely require a step two and even a step three in terms of manipulating the short end.

2) As the US dollar has strengthened and U.S. focused corporations have severely beaten globally focused corporations throughout the early weeks of earnings season, small caps have outperformed broader markets over the past week, and month. Should the Fed succeed in putting downward pressure on dollar valuations, capital flow will move back toward large caps at least in the short term. Should the Fed's effort fail, that current trend will not only continue, but likely exacerbate.

I took profits last week on my Intel (INTC) long in anticipation of post-earnings weakness in this name, intentionally deploying half of that capital, while leaving the other half in cash, so there would be some dry powder available without increasing my semiconductor industry allocation. Last night's guide down in terms of Q3 revenue, albeit on higher margin, provides the opportunity hoped for, if you, like me, trust Advanced Micro Devices (AMD) CEO Lisa Su to be the best in this business. 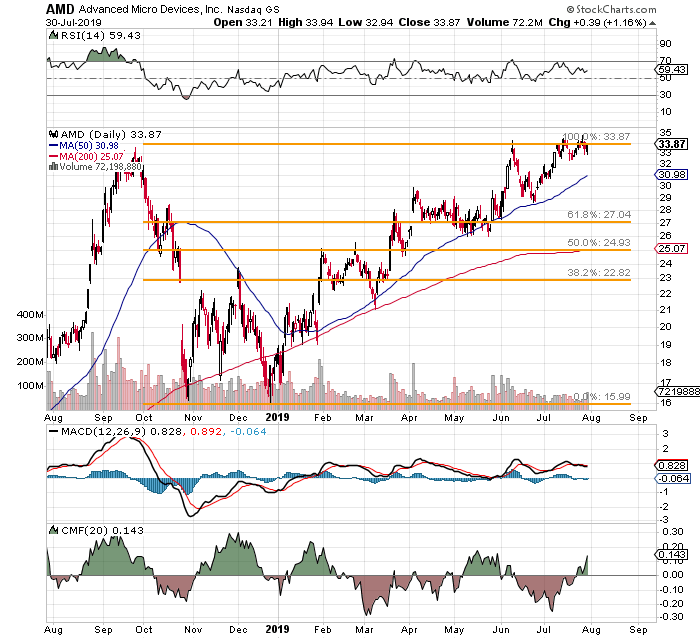 I see prices close to the 50 day SMA ($31-ish, actually $30.98), I think I start adding equity. My current price target for AMD is $37, and the name has been a performer for me. Should we not see prices that low, this day, my attention turns to net basis manipulation. AMD September monthly puts went out last night at $1.22, and will obviously pay more than that this morning. My current net basis stands at $24.31, and I would welcome the opportunity to knock that down a bit as I feel I was late to this name.

How significant is it that Apple CEO Tim Cook has finally managed to reduce the impact of the iPhone in terms of revenue to 48.3% of total sales? In terms of valuation, this creates immense upside potential, especially with the recurring revenue model of the firm's services businesses growing at 18%, and now boasting 420 million paying subscriptions. Oh, the guide higher for Q4 revenue without increasing the outlook for operating expenses does not hurt either. Remember what I told you about the $215 level yesterday? That spot serves as either catapult or resistance.The firm's net cash position of $102 billion can not be taken lightly either. 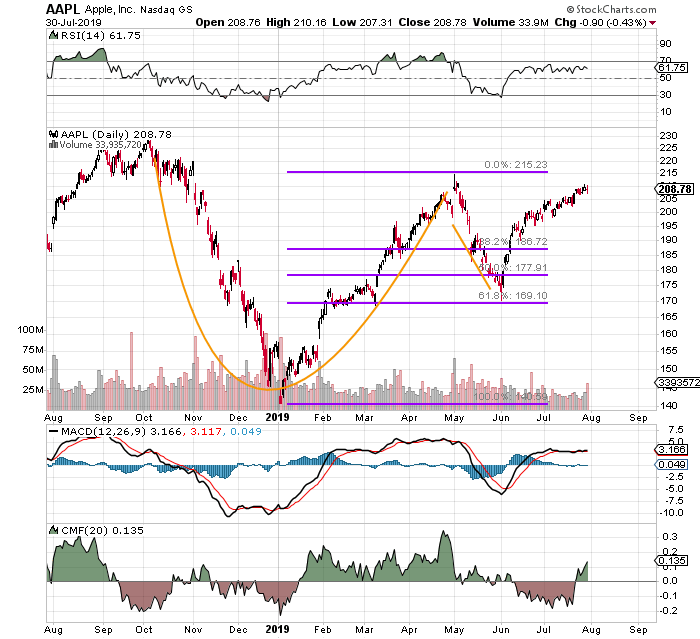 My thought here is that with likely upside pressure on valuation, coupled with a commitment to returning capital to shareholders in an effort to reach what the firm terms a "net cash neutral" position, that the shares can be bought should technical support be found above $215. Upon last night's release, I reiterate my target price of $240, with my panic point of $188 under review based upon chart development over the next few sessions.

(Apple and Lam Research are holdings in Jim Cramer's Action Alerts PLUS member club. Want to be alerted before Jim Cramer buys or sells AAPL or LRCX? Learn more now.)

Get an email alert each time I write an article for Real Money. Click the "+Follow" next to my byline to this article.
TAGS: Earnings | Economic Data | Economy | Federal Reserve | Interest Rates | Investing | Markets | Stocks | Technical Analysis | Trading