The noun "vision" is simply defined as the faculty, or state of being able to see. Secondarily, the term might be used to describe an ability to think about or plan the future through the use of imagination or wisdom. There are many inputs and even biases that can, and perhaps even unintentionally, impair that second kind of vision. Helen Keller was once quoted describing the ability in this way "As selfishness and complaint pervert the mind, so love with it's joy, sharpens the vision."

Do I fully understand the depth of what she meant? Not really sure. What I do think that I understand, is that to truly understand and interpret the environment that one must operate in, one must find a way to remove clutter from view... all the while balancing known bias, and then making the best attempt to traverse unknown bias as hard as that is. Love the process. Love the effort required to try to honestly see what is. That is the mission at hand. Can I, can you, might we honestly embrace this challenge? We can darned sure make our best effort, now can't we? Make it so.

Domestic equity markets were undeniably engaged in retreat through Monday's session. All of the significant indices traded lower. Again, the Russell 2000 led the way lower, suggesting continued concerns over economic growth, as this selloff occurred simultaneously with a stronger U.S. dollar. That should in theory pull flow away from larger multi-caps which was surely not the case. The Nasdaq Composite, and the Nasdaq 100, also both underperformed broader markets, suggesting profit taking ahead of earnings as the Information Technology sector is expected to post a rather poor season while the sector has behaved for three months as if this were not the case. The Apple (AAPL) downgrade at Rosenblatt accelerated Tech weakness.

Trading volumes were higher from late last week. Is that telling? Normally money flowing away from better performing stocks on higher volume would tell me that there was indeed increased institutional selling. What's that? A warning sign. Yet, volumes were well below where they stood earlier last week, so this may or may not be one of those conditions necessary to discount in some way. Equity index futures are lower again in the very early going. This followed the direction that global equities moved in, that in turn followed Wall Street. Perhaps this has nothing at all to do with moving ahead of earnings season, but ahead of the bevy of central bankers that will speak starting today, and culminating with Fed Chair Powell's twin testimonies before the House Financial Services and the Senate Banking Committees over Wednesday and Thursday this week.

I'll tell you this. I'm not going to read too much into Monday's action. Just yet. We did discuss yesterday the likelihood for an increased environment for volatility. Understand this, my fellows... if institutional selling is afoot, the condition is contagious. Since the advent of algorithmic trading, rotation can be forced, and there is a lot less independent thought factored as input. I don't think there is a need to run just yet. Stay alert. Though a 50 basis point reduction to the Fed Funds Rate was always fantasy in my opinion, apparently others had at least priced in the possibility. The Fed is still the driver for now. After the week's Fed speak, CPI data for June arrives on Thursday.

Can't Make This Stuff Up

As some one who closely follows the Defense and Aerospace industry, I love it. As someone who runs more than one net-long portfolio, I'm not so sure. Higher level U.S. and Chinese negotiators prepare to speak this week, as a means toward resuming trade talks that had come to screeching halt prior to presidents Trump and Xi meeting up in Osaka at the G-20 summit in late June. That much we know. What we don't know is how much China will be willing to purchase in order to reduce the trade gap, how willing China will be to properly enforce protections of the intellectual properties of non-Chinese entities, or how much the U.S. is willing to give on already implemented tariffs in order to get somewhere on these goals.

The interesting news that broke on Monday evening was the U.S. State Department's approval of the potential sale of $2.2 billion worth of arms to TECRO. What's TECRO? The Taipei Economic Cultural Representative Office. What's that? That's what Taiwan calls itself in D.C., kids. Rock and Roll. The deal as far as I can tell is for the 108 M-1 Abrams tanks that we had discussed at least a month ago in this space, as well as 250 Stinger Missiles, 16 Heavy Equipment Transporters, 14 M88 Hercules Vehicles, 122 M2 ("Ma Deuce" to the highly motivated, truly dedicated, hard charging, fire-eaters among us) Machine Guns, and 216 M240 Machine Guns.

The tanks would be manufactured in both Alabama and Ohio by General Dynamics (GD) . The M88's in Pennsylvania by BAE Systems (BAESF) , and the Equipment Transporters, I believe (not sure) in Wisconsin by Oshkosh (OSK) . Stinger missiles are principally manufactured by Raytheon (RTN) , which by extension also brings proposed suitor United Technologies (UTX) into the picture.

All of this a negotiating tactic? You really never know.

In Market Recon on Monday, we discussed expectations for a horrific quarter for the Materials sector. Currently, Q2 aggregate expectations across that sector are for earnings growth of -15.6% on revenue growth of -14.8%. Clearly, this group is weighing on overall S&P 500 projections as much as any.

Monday afternoon (NY time), German chemicals giant BASF (BASFY) warns. The firm cuts forecasts for profitability, while citing the trade conflict between the U.S. and China as a reason. The stock sold off 5% in response. So, I get to thinking... Sarge, you moron, do you think maybe there might be some value in this space. I go looking basically for a chemicals name with a decent technical set-up. This is during the Home Run Derby by the way that was won by a New York Met, Pete Alonso. So, Mets fans, at least we have that.

Let's take a look at Ingevity Corporation (NGVT) . What I see here is perhaps, a cup in the process of forming a handle that itself is the product of a "death cross". 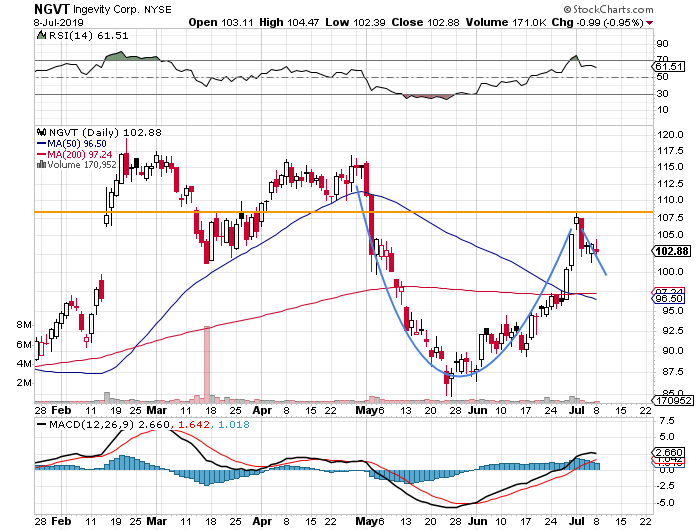 I can in no way tell if the handle is yet complete. Relative Strength is fine. However, our daily MACD is curling (or at least the black line... the 12 day EMA) the wrong way. Bear in mind that this firm is set to report Q2 results on July 24th. This stock is notorious for overreacting to earnings results and then basing in some way. That 3.7% drop on May 1, followed by a 7.5% decline on May 2 (the left side of our cup) is a response to Q1 data.

See the 11.2% pop on Valentine's Day? Yup. Earnings. That move by the way, broke the shares out of the Double Bottom pivot of $104. Not bad if you caught that one. I did not. What I see is a $4.3 billion firm that has reported revenue growth of between 18% and 21% for four consecutive quarters that is expected to see 17.5% such growth for the current quarter. Consensus also calls for EPS of $1.33, which would be good for growth of 18.7%, the firm's slowest rate of growth since 2017. Still a whole lot better in my opinion if the estimates are close than a broader sector looking for numbers like -15.6% on -14.8%. Know what I mean?

If I am right... and I may not be. You may have noticed that I don't live on my own island surrounded by hired help, this stock might end up looking like a beacon through the fog. I am very likely to start accumulating these shares in baby steps, perhaps even less than my usual entry of 1/8 of intended position size, as I usually wait for the rebound off of the handle to pass pivot (in this case, $108). We see that, I think the shares can move above $125 this year. Keep in mind, that lofty price is above any analyst target price that I see. Also keep in mind that these shares break below the $99 level and you won't see the door hit me in the tail. I'll be long gone.

Be cognizant that these shares are rather lightly traded. Thus, related options run with paltry open interest. I can not in good conscious lead you into an options trade as there is not enough liquidity for one to get out effectively should there be a change of heart.

Get an email alert each time I write an article for Real Money. Click the "+Follow" next to my byline to this article.
TAGS: Federal Reserve | Interest Rates | Investing | Markets | Stocks | Technical Analysis | Trading | Chemicals | Defense | China