Happy "Fed Day", as if anyone needs to be told. For this afternoon, we do know that the FOMC will increase short-term interest rates. For this afternoon, we know that the FOMC in their statement, in their newly revised economic projections, and Fed Chair Jerome Powell, in his press conference... will attempt to both quantify and qualify at least some of the "pain" that has been promised to you and I. Thank you, Sir... may I have another?

On the bright side, equities have acted well on "Fed Days" in 2022. On the not so bright side, the day after has been a problem, as has the year in general. We all "get" the position that the FOMC is in. The central bank feels intense pressure to directly confront consumer level inflation through demand destruction and an intentional reversal of the Fed's own public creation... "the wealth effect." The prioritization of this one side of the Fed's dual mandate, "price stability" comes at the expense of not just economic growth, but economic health.

On Tuesday, the Census Bureau released August Housing Starts that surprised significantly to the upside. The problem was that August building permits, that represent what's to come, disappointed just as significantly to the downside. This came after the NAHB Housing Market Index disappointed for September on Monday and last week, which was quite broadly, a poor week for domestic macroeconomic performance.

On balance, the Atlanta Fed once again revised their GDPNow real-time model for Q3 economic growth down from +0.5% to +0.3% (q/q SAAR) on Tuesday after that report on housing starts forced Atlanta to downgrade the Q3 contribution from residential investment. This comes after Atlanta had to take the quarter from +1.3% to +0.5% last week, and the US economy in real terms contracted outright for both the first and second quarters of 2022.

This afternoon's dog and pony show will be in three parts. First up will be the rate hike. This will be revealed in the Fed's official policy statement. This will be simultaneously released with the Fed's economic projections, which are so regularly incorrect and significantly so as to be almost comical. Comical that is if they did not impact financial markets because they do signal the committee's forward looking thoughts on policy implementation. The ridiculous dot plot is part of this material.

Third comes the press conference a half hour later. This is where the Fed Chair faces the music so to speak. Sure, some of the financial media is there just to hear themselves speak, but there are always some good questions. This is where traders and especially keyword reading trading algorithms will take their cue. How Powell reacts to these good questions becomes just as important if not more so than the policy decision itself. Personally, I find that Mike McKee at Bloomberg, Edward Lawrence at Fox Business, and Brian Cheung at Yahoo Finance tend to be a little more on the ball than are some of the others.

As for the Fed Funds Rate, still a few hours before we hear from our rooster friends, I see futures markets trading in Chicago are now pricing in an 84% probability for a 75 basis point increase (to the Fed Funds Rate target) this afternoon. This would take the FFR up to 3% to 3.25% from the 2.25% to 2.5% where it is now.

Futures are also pricing in a 74% likelihood for another 75 basis points on November 2nd, and a 53% probability for an additional 50 bps on December 14th to leave the target rate at 4.25% to 4.5% by year's end. These same markets show a projected terminal target rate of 4.5% to 4.75% to be reached by March 2023. The FOMC's projected median year end Fed Funds Rate for 2022 was 3.4% in June within a range spanning 3.1% to 3.9%, so obviously this projection will need a significant upgrade when the Fed's predictions are released later.

Speaking of those June projections. The Fed had at that time seen 2022 GDP at median growth of 1.7%, which was down from their projection of 3.4% in March (See what I mean about these projections?) . Obviously, that kind of growth is simply farcical at this point after consecutive quarters of economic contraction on the tape now followed according to the Atlanta Fed by a third quarter that might not be growing much at all.

Readers will notice energy commodity prices popping early on Wednesday morning. All we know by now is that the Russian invasion of Ukraine earlier this year has turned into a humiliating experience for the Russian Army, as Ukrainian forces using NATO hardware have easily retaken large swaths of their own territory while forcing a large-scale Russian retreat.

Still, Russia is dangerous, and maintains the perception that the nation could still escalate the war to levels nobody wants to see rather than acknowledge defeat. On Tuesday, The Financial Times reported that NATO has accused Russia of holding questionable referendums in Ukrainian territory still under Soviet, I mean Russian occupation, on possibly joining or being annexed by the Russian Federation. Meanwhile, Russia's legislative body, the Duma, passed on Tuesday a law that increases penalties for deserters and those that evade conscription when mobilized. The penalty for such "crimes" would now be a five to 10 year prison sentence.

The news broke overnight. Russian President Vladimir Putin will be activating up to 300K Russian Army reservists. While some may see the sham referendums and instant upsizing of the Russian Army as a sign of weakness, it also means that Russia under Putin is doubling down on their war in and on Ukraine. By forcing reservists into active service now that the active Army has been severely weakened, Putin is signaling his willingness to carry on with his "special military operation" rather than trying to find a face-saving way out of his mess.

Just an FYI, Russian reservists (or reservists from most nations for that matter) do have some military experience, but do not train all year long and are not forced to meet regular Army standards for physical fitness and keep military skill-sets sharp as are US military reservists. While these are not raw recruits, these troops are not close to being comparable in ability or in readiness to being the equivalent of US military reservists or US National Guard personnel. US reserve forces are operational. Russian reserve forces are strategic. Huge difference.

The S&P 500 is in an interesting spot going into this afternoon's announcement. 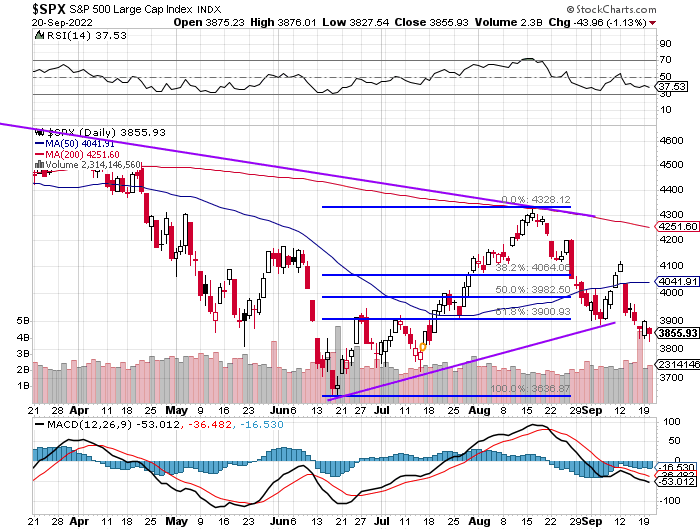 Readers will see the S&P 500 trading below all of its key moving averages and in a technically weakened position having already made a new weekly low below the lows of early September, thus extending the recent downtrend. 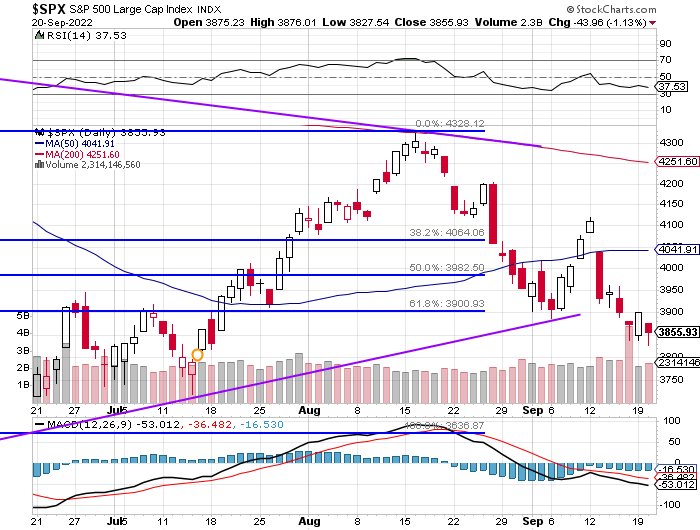 Readers will also see that this week, the S&P 500 has found both stiff support at 3825 and still resistance at 3900. Pressure on either one of those spots in the wake of either a too hawkish or too dovish FOMC today could act as a pivot for the entire equity market and thus provide a slingshot effect. My area of interest is the 3796 level, which would be the fill of a still unfilled (though smallish) gap left over from mid-July.

My thoughts? Higher quality debt securities or debt security ETFs can be purchased (no promises, but this is my plan) as the US 2 Year Note approaches a yield of 4% and greater.

Equities showed weakness on Tuesday. The S&P 500 gave up 1.13%, as the Nasdaq Composite surrendered 0.95%. All 11 S&P sector-select SPDR ETFs traded into the red for the day, led lower by the REITs (XLRE) , Materials (XLB) , and Discretionaries (XLY) .

Even Nvidia (NVDA) ended up selling off later in the day. Hopefully, most readers who follow me on Twitter, saw my tweet to take profits less than an hour after CEO Jensen Huang's keynote address had begun at the GTC conference on Tuesday. I was on the road all day and unable to write. That trade was a winner.

The Herculean effort was put forth by Apple (AAPL) . That stock, after positive commentary regarding the iPhone 14 Pro and pricing by Evercore ISI analyst Ming-Chi Kuo, for much of the day had kept equity markets from selling off more sharply than they did. 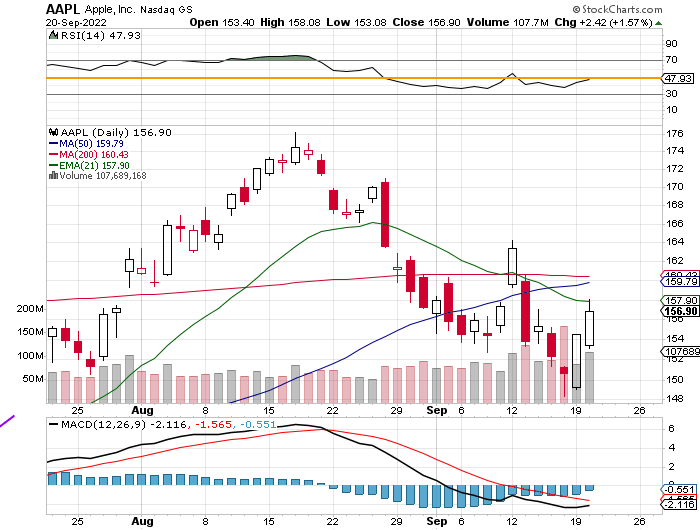 Readers will note AAPL's failure on Wednesday to take back it's 21 day EMA, instead hitting stiff resistance at that spot. This rejection illustrates the increased caution of portfolio managers (and that of swing traders as well) going into this afternoon's events.