To The Same Flower (excerpt)

I see thee glittering from afar

And then thou art a pretty star

Not quite so fair as many are

In heaven above thee!

May peace comer never to his nest

Who shall reprove thee

Equity markets tried to rally on Tuesday, coming off of a late Monday rebound. What happened is history. Traders traded. Flippers flipped. The major indices surrendered, significant ground recovered thus lost, and then gains permitted to fade away. We know the forces impacting our marketplace. From China to the Fed to the fiscal side of policy. Not to mention valuations, though not a reason for fire, certainly capable of providing for ample kindling. Tuesday offered investors disappointing news centered around a failed (for now) effort in the House of Representatives that would suspend the debt ceiling until after the 2022 midterm elections.

The Treasury has told Congress that the federal government runs out of dough at some point this October. Hence, the debt ceiling becomes yet another political football tied to the large "tax and spend" plan also being negotiated in the House at this time. So, now, the extreme left thinks that they can keep the smaller, but bi-partisan infrastructure bill from passing (as soon as this Monday) unless they get their $3.5 trillion+ social spending package, while the right plans to keep the federal government from spending at all and perhaps even defaulting, unless the size of that package contracts considerably. Just super.

Wait. What's that? Rising over the hill? Tuesday night. Bloomberg News reports that Hengda Real Estate, the main business unit of troubled Chinese property developer Evergrande, will indeed make its Thursday bond coupon payments. Huh? For real? No, the Evergrande crisis is not over, but it might be over for now, meaning this week or even this month. Where did the money come from? Who knows. We do know that in recent months, Blackrock (BLK) , and HSBC (HSBC) increased their holdings of Evergrande bonds. Is there investment from these corners or from somewhere at this time? Is the Chinese central bank, the PBOC, set to provide liquidity to either Evergrande directly, or to highly impacted "domestic" markets? Without a large investment or some kind of intervention, the expectation was for a true default this week, after the firm missed a payment due two banks on Monday.

Wednesday markets breathe at least a sigh of relief as it appears as though Evergrande may live to default another day. Now, the dip buyers will get a second chance to leave their mark as no one truly believes the debt ceiling will be left in place (be careful there) and everyone believes that our legislators will pass something as soon as next week. (Be careful there too.)

Okay, this is the deal. Before Fed Chair Jerome Powell takes center stage at 14:30 ET, the central bank will release both their policy statement and quarterly updated economic projections at 14:00 ET. It is in the statement where the Fed can signal a coming policy change in plain language. The third paragraph is where the central bank covers the pandemic's impact on the economy, and the fourth is where the Fed discusses both inflation as well as the current pace of accommodation. That fourth paragraph is lengthy and is where I would make overt changes if I were trying to tell you something without boxing myself into any kind of commitment.

Beyond that, we will have to study the famously inaccurate and usually quite useless dot pot within the economic projections (except maybe this time) to try to get an idea of when the FOMC (which will be more hawkish come January) would like to get the ball rolling on not just tapering, but at least have a clean table to work upon. Only three "dots" need to move one "smidge" higher for the year 2022 for an increase in the Fed Funds Rate to move into that calendar year.

Bottom Line? Bloomberg News surveyed 52 economists. Two-thirds of them see an announcement on tapering the monthly pace of asset purchases ($80 billion UST + $40 billion MBS = $120 billion) in November with a majority expecting an actual reduction in December. You all already know if you read me that if I had been running the FOMC that MBS purchases would have been halted in their entirety last spring, so the Fed would only have to worry about Treasury purchases at this point. Like spilled milk, there is no use in crying over lost monetary opportunity that only increases economic risk at a bad time fiscally now. I led them to water. That's all I can do from here. Fed Funds futures markets trading in Chicago are currently pricing in a 55% chance of a 0.25% increase (from 0% - 0.25% to 0.25% - 0.5%) being made to the target for the FFR by December of 2022.

Jerome Powell will have more to worry about in this press conference than tapering asset purchases, inflation, unemployment and interest rates. There will be questions from the financial media on Wednesday afternoon seeking more information about trades executed by Dallas Fed Pres. Robert Kaplan and Boston Fed Pres. Eric Rosengren in 2020 in markets impacted by monetary policy (what market isn't?), especially the emergency policy measures undertaken as the federal (and regional and municipal) government's response to the pandemic effectively shut down the U.S. economy.

Both the Dallas and Boston Feds have stated that the trading that took place was in line with the central bank's internal rules. Both of these regional district presidents have stated that they will liquidate all of their stock holdings. The Federal Reserve Board has said that it will review the rules that govern such activity by senior officials. Basically, I see no way that the Fed Chair can handle this where the exchange between himself and the media does not become difficult, and unfortunately... distracting from the mission at hand.

Yes, I did reinitiate the Walt Disney Company (DIS) later on Tuesday night, several hours after the NYSE closing bell. CEO Bob Chapek, speaking at the Goldman Sachs Communacopia Conference, said that global subscriber growth for Disney+ will slow during the current quarter due to pandemic impacts to the pace of production. Chapek is looking at growth of "low single-digit millions" for the third quarter. I'm okay with that. Let me tell you why.

Over the weekend, I was having dinner with my parents, my family, my sister's family, and a slew of aunts, uncles and cousins at a sports bar in Cape Canaveral, Florida. One of the Disney Cruise ships passed through the canal that abuts the restaurant's property. The ship was headed out to sea with far fewer passengers aboard than one would expect.

Every young person in that bar from kids up to 30 year-olds ran out to the restaurant's pier to watch that ship pass. They all came back, smiles ear to ear. They were all chattering about how great it would be to be on that cruise ship or go to Disney World once their parents or families thought it safe. Maybe we could all go together. I said to myself.. "Get back in DIS before we beat COVID." On Tuesday, the CEO handed me a discount. 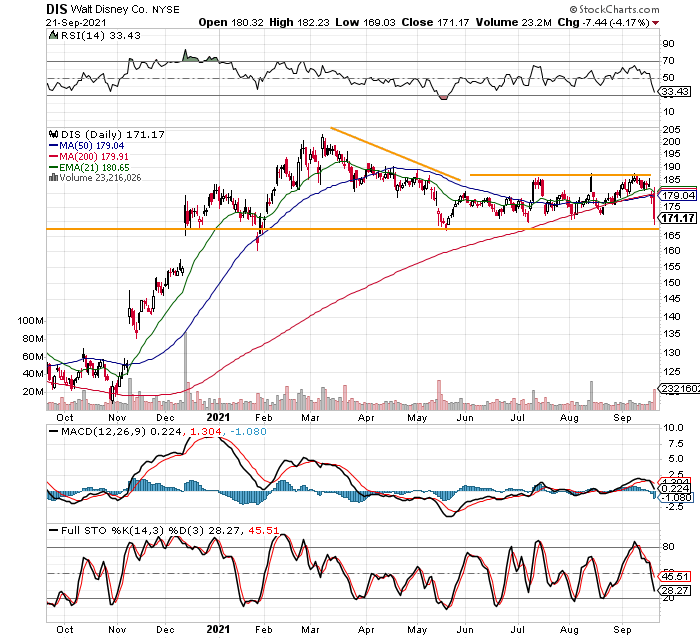 Disney closed very close to being in a technically oversold condition. One easily sees the basing pattern in place since May coming out of what looked to be shaping up a descending triangle that produced a base rather than a breakdown. The RSI, Full Stochastics Oscillator, and daily MACD all look awful. The 21 day EMA, 50 day SMA, and 200 day SMA are all running together... meaning that momentum from here will force both swing traders and portfolio managers to jump on board should any momentum build. I love, love, love the set-up.

1) FedEx (FDX) is being taken to the woodshed on Wednesday after missing earnings estimates quite badly. I did take off two thirds of my stake as I raised cash earlier in September. Do I buy back something today? I have not so far. I am kind of wishing that I sold it all. I have to see where the name stabilizes.

2) Adobe (ADBE) beat expectations for both the top and bottom lines while increasing guidance. That tells me that the shares are still too expensive. I have not jumped in, and may not. I love Adobe. It's been a Sarge fave for many years. Just not right now. There are more than $100 in between the 50 day SMA and the 20 day SMA. I need to see either a descent toward the one, or momentum in retaking the other.

Get an email alert each time I write an article for Real Money. Click the "+Follow" next to my byline to this article.
TAGS: Economic Data | Federal Reserve | Interest Rates | Investing | Markets | Politics | Stocks | Technical Analysis | Trading | China