The enlightened ruler is heedful, and the good general full of caution.

Tuesday. Call it "cautious" Tuesday. It was the eve of an FOMC policy decision, and even more importantly, the eve of an FOMC official policy statement, press conference and potentially new guidance on the trajectory of said policy. Will Wednesday afternoon carry forth the most consequential "Fed Day" results of our lifetimes? You'd have to be pretty young to go that far, but my feeling is that this could be, if not pivotal, then potentially at least as significant as were the last three or four. In terms of market and eventual macro-economic outcome, each meeting for the past almost year has been for lack of a better word... a real "doozy."

As for Tuesday, equities started out strong. The Nasdaq Composite had been up as much as 1.5% early before someone pulled the plug. That someone was the Bureau of Labor Statistics. It was 10 am. The S&P Global Manufacturing PMI had managed to squeeze out a print just above the "50" bound, as would the ISM manufacturing survey. Construction spending for September had landed in a state of month over month growth, unexpectedly.

The more shocking print from a Fed watcher's perspective was the September JOLTs data. Never mind that the number of US job quits contracted and printed below expectations, as that is an indicator of a tightening labor market, the number of US job openings printed up fairly huge from August and well above consensus. In fact, at more than 10.7M openings, there are about 1.9 openings for every job seeking unemployed person. Too slack for the Fed? Perhaps.

That already mentioned Nasdaq Composite would close down 0.89%, its sibling, the higher tech Nasdaq 100 closed down 1.02%, despite the fact that the Philadelphia Semiconductor added 0.77% ahead of earnings to be released by Advanced Micro Devices (AMD) after the closing bell. Everything else was rather quiet. The S&P 500 and Dow Transports gave up 0.41%, and 0.46%, respectively, while all of the small to mid-cap indexes gained a bit on the session.

Five of the 11 S&P sector-select SPDR ETFs traded higher, with six lower on Tuesday. Energy (XLE) led as usual, up 0.97%, while Discretionaries (XLY) finished the day in last place, down 1.01%. Somewhat surprisingly, winners beat losers at both of NY's leading equity exchanges, by a rough 3 to 2 at the NYSE and about 5 to 4 at the Nasdaq. Advancing volume took a 65.3% share of composite NYSE trade and a 49.4% share of that metric for Nasdaq listings.

Perhaps most telling was the caution expressed, or really the lack of aggression or recklessness. Aggregate trading volume decreased day over day for both NYSE and Nasdaq listings as well as across constituencies of both the S&P 500 and Nasdaq Composite. In other words, the pros sat on their hands on Tuesday.

Treasury securities have been quite volatile however. The US Ten Year Note went out yielding 4.06% after paying as little as 3.93% earlier in the day. Thus re-establishing a gnarly looking yield spread inversion with the US Three Month T-Bill by day's end at -12 bps. That spread un-inverted early on Wednesday morning, as it came close to doing early on Tuesday. Meaningful? I'll let you know later. As in after the Fed's dog and pony show this afternoon.

The day has come. The FOMC is expected to increase the target for the Fed Funds Rate by 75 basis points for a fourth consecutive meeting. This will move that target to a range of 3.75% to 4%, the highest it has been since 2008, extending the Fed's aggressive attack on inflation, which has failed to this point, largely because economic reality often/usually lags changes made to monetary policy by as little as nine and as many as 18 months.

The good news is that of late, some Fed officials have signaled a coming slowdown in the pace of benchmark rate acceleration in an effort to allow conditions on Main Street, USA to catch up a little. This way some kind of assessment can be made before possibly taking the US economy way beyond anything remotely acceptable.

This morning, futures markets were pricing in an 87% probability for that 75 basis point hike this afternoon, and a 13% likelihood for a 50 bps hike. 75 basis points is already broadly priced into financial markets. The questions from there are two pronged. The first is for traders. What happens on December 14th? Right now, those very same futures markets are close to playing it 50/50 as to whether there would be a fifth consecutive hike of 75 bps or "just" 50 bps.

The second question is really far more important and is for investors, employers, employees, households, retirees, and pretty much all of us. Where is the terminal rate, and how long will rates remain elevated? Right now, futures see a terminal rate of 5% to 5.25% that would be reached in March and stay put for about four months. I don't mean the terminal benchmark rate exactly. I refer to the length of time that the US and global economies must adapt to elevated rates. Are we talking years? Perhaps many years?

I mean slowing down the pace of short-term rate increases is inevitable. One would have to be a simpleton to continue to place the economy in harm's way without concrete evidence that what has been done had at least significantly slowed inflation. Being that intense consumer inflation was created through pandemic and warfare induced scarcities as well as overtly perverse and grossly irresponsible fiscal policy, and the one that we can really do something about most easily is fiscal policy, does not reversing that policy make the most sense?

The Fed's quantitative tightening program has finally hit its stride, reducing the central bank's balance sheet by $20B+ per week. This reduces the monetary base and money supply, which obviously reverses the mistakes made fiscally. The program, if left untouched, will bring the Fed's balance sheet down to about $8.5B by year's end and about $6.7B by the end of 2024.

The smartest thing that the Fed could do right now, is increase the FFR by that 75 bps, and signal both in the official statement as well as in the press conference a willingness to be flexible in its manipulation of the short end of the curve moving forward without committing to anything. Then allow the balance sheet reduction program to do most of the work for the next year-plus.

If All Else Fails...

Word is that the Powerball jackpot is now over $1.2B for tonight's drawing. There have not been 38 drawings with no winner since the last strike happened on August 3rd. The odds of winning the jackpot are estimated at one in 292M, far greater than are the odds of being struck by lightning (> one in 1M) or attacked by a shark (one in 5M). Still a chance is a chance. Then again I have been hit (not bit) by a shark (twice), and I have been knocked down by lightning once. I should definitely play.

On Tuesday evening, Livent Corp (LTHM) posted Q3 adjusted EPS of $0.41, beating Wall Street on revenue of $231.6M. While that revenue print fell short of estimates, it was good for year over year growth of 123.6%. This was the fourth consecutive quarter of accelerating annual sales growth. GAAP net income was up 29% to $77.6M, resulting in a GAAP EPS of $0.37. Adjusted EBITDA landed at $110.8M, up 17% sequentially and over 700% over the comparable period last year.

As far as guidance is concerned, Livent announced that all capacity expansion plans are on track, while also projecting that full year revenue will end up in a range of $815M to $845M, narrowing previous guidance of $800M to $860M. At the midpoint, this would be good for growth of 97%. The firm also sees full year adjusted EBITDA at $350M to $370M, which narrows previous guidance of $325M to $375M, while increasing the midpoint. At that new midpoint, this metric for the full year would grow 418%.

The balance sheet is in good shape. Livent ended the quarter with a net cash position of $211.6M and inventories of $141.8M, bringing current assets to $573.9M. Current liabilities amount to $163M. That lands the firm's current ratio at a quite robust 3.52 and the firm's quick ratio at a still very strong 2.65. 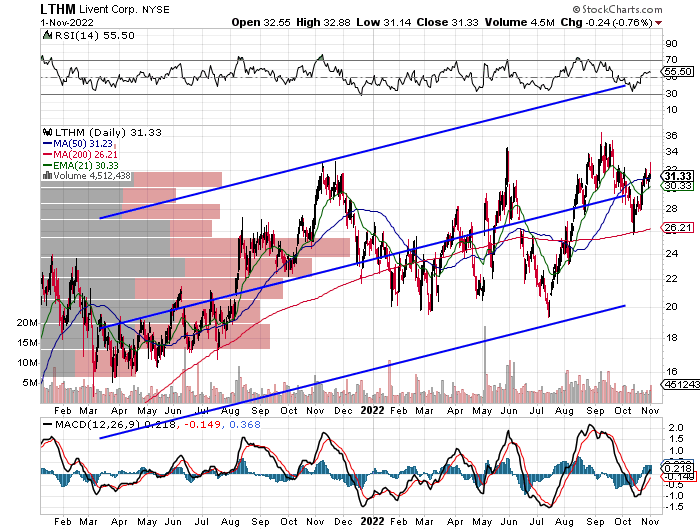 The stock closed on Tuesday afternoon at $31.33, just above the 50 day SMA. That comes to about 22 times forward looking earnings. Expensive in 2022? I suppose. Expensive for growth like this? The answer is that you don't really see growth like this anymore.

The stock sold off overnight (-4+%) on the revenue miss. I added to my existing long position overnight, despite that discounted price being well above my net basis. This name has been and is for me a long-term investment. When will I bail? When the stock spikes, which it has not done. Just a slow, grinding ascension over time as the world wakes up to its semi-permanent need for battery metals.

Get an email alert each time I write an article for Real Money. Click the "+Follow" next to my byline to this article.
TAGS: Economic Data | Economy | Federal Reserve | Interest Rates | Investing | Markets | Stocks | Technical Analysis | Trading