Nothing To See Here

Sure, U.S. equity markets sold off rather hard on Friday afternoon. The algorithms picked up the pace around 1 pm ET, took a break, and then resumed the hard selling going into the close on the increased volume that comes hand in hand with a "quadruple withing" of expiration events. The thing is though, that for the entire week, the broader indices actually performed quite well. Um, Sarge... markets traded lower last week. Nice catch. That, my young Padawan, is true. Think though... think about the events this market has dealt with and is dealing with.

The S&P 500 gave up one half of one percent for the week, only because that broadest measure of U.S. large cap equity markets gave up a half percent for Friday. The Nasdaq Composite surrendered close to three quarters of one percent on Friday, as well as for the week. Both of these indices have now spent more than two weeks a piece trading above their individual 50 day SMAs, while neither index has kissed their own 200 day SMA since early June.

It was just Monday, that globally, crude prices were shocked out of a deep slumber, by aerial terrorist attacks made versus Saudi oil production infrastructure. It was just Tuesday morning that the Federal Reserve appeared caught off guard by a loss of control in overnight money markets and was forced to inject cash day after day in order to keep the U.S. economy greased. It was Friday, that a Chinese delegation, in the U.S. for trade talks subordinate to the October meeting, ended up exiting the meetings early and did not take a planned tour of farms in Montana and Nebraska.

Sure, equity market performance was indeed skewed toward favoring defensive behavior. Bond proxies such as Utilities and REITs along with Health Care and Staples all fared better than Industrials, Financials, or Discretionary type names. Does this turn in behavior persist into this week? Though, the Chinese representatives now claim that they skipped the farm trip at U.S. request, and the October meeting (possibly the 10th) is still a go. There is something of a flight to safety trade in motion through the zero dark hours, as flash manufacturing PMIs across Europe, but especially in Germany, have printed at numbers so poor that I reacted by refreshing my screen twice just to make sure they were correct.

After four days of embarrassing forced injection of liquidity, readers may have noticed the Fed, on Friday, taking steps toward providing a more substantial, but not yet a standing facility for dealing with overnight shortages of available cash reserves. The Fed announced that the central bank was willing to continue overnight repurchase operations "of at least $75 billion" each day until mid-October. The Federal Reserve also unveiled a new facility that would inject up to $90 billion in 14 day loans if necessary this week in order the get the nation through the end of the third quarter next week.

Bravo. Increased issuance of Treasury securities (public knowledge) and quarterly taxes (that happen four times a year every year) may have somehow caught our central bankers off guard, but there was no way, the end of the quarter was going to sneak by.

While we are now led to believe that all is as well regarding U.S./China trade negotiations this (Monday) morning as it seemed last Thursday, the fact is that there are several highly significant barriers still to be satisfactorily addressed (such as systemic intellectual property theft) before any real progress might be realized. Important here as well is the continued embarrassment at home for the Chinese government as the protests in Hong Kong continue into a sixteenth week ahead of the not too distant national celebrations scheduled for the 70th anniversary of the communist party's near complete military victory in 1949.

The communist regime's struggle to control the open discontent in Hong Kong was on full display the past weekend. What the world saw, as protesters took control of a shopping mall, was individuals putting up barricades, throwing what we refer to as "Molotov Cocktails", and not just waving the flags of foreign, more democratic nations, but defacing and actually stepping on the Chinese (mainland) national flag before tossing it into a river. Needless to say, that fireworks connected to the October 1st anniversary have been cancelled in Hong Kong.

Does this make China more or less likely to play ball fairly in trade negotiations? That's very hard to say. There is no doubt that the Chinese economy has slowed far more quickly than anyone anticipated. We believe that the communist regime is likely to place a premium on power over the economy if a choice has to be made. The fact that Taiwan not only has never succumbed to communist rule, but continues to enhance the autonomous island's defense capabilities with the only realistic threat coming from the mainland, while the one part of the mainland (Hong Kong) accustomed to a more western style of democracy obviously prefers less control from Beijing is certainly something to consider. Supply chains are already moving.

I am sure that many readers, at least those who follow me regularly, noticed the peaking for several defense names on Thursday, and then the group suffered a bout of increased selling on Friday. So what gives? Haven't Houthi rebels warned foreign diplomats that Iran plans to follow up the recent strikes on Saudi Arabia with more attacks? Has not the Pentagon announced the intention to deploy U.S. forces as well as material (at the request of Saudi Arabia) to the Middle East to take up a defensive posture? Yes. All true.

The deal is this. You all know that the House of Representatives has passed a continuing resolution that will head to the Senate this week, in order to keep the U.S. government funded through November 21st. The problem for those of us who invest in the defense industry is that new Defense Department programs can not begin, and production rates of already begun programs can not be increased while the government operates under a continuing resolution. Congress must also pass a defense appropriations bill. The Pentagon, besides talking about Mid East deployments last week, also mentioned on Friday the possible delay to the U.S. Army Long-Range Hypersonic Weapon. A delay of this program directly impacts Dynetics (private), Lockheed Martin (LMT) , and Raytheon (RTN) . Raytheon is currently engaged in a yet to be closed agreement to merge with United Technologies (UTX) .

It appears to this reader, that current Air Force Hypersonic programs already begun, are not directly impacted, however the Air Force plan to update GPS devices across the fleet of B-52 strategic bombers would be.

While I am not really sure if FANG, or FAANG is even a thing anymore. I would like to caution readers to what I see (and many may already see) in regards to Amazon (AMZN) . Now, don't get me wrong, I like Amazon. Dominant across e-commerce. Disruptor of the status quo. Grower of advertising opportunity, leader in the public cloud. All good reasons to believe in the name. Now, the bad news, or good news, depending on one's point if view.

Last week, the firm announced the ordering of 100K fully electric vehicles as well as plans to invest $100 million in reforestation projects to help remove carbon from the atmosphere. The firm made "The Climate Pledge", committing to reach 100% renewable energy by 2030, and net zero carbon by 2040. Very commendable. These are good things. Good things that are going to hurt margin. 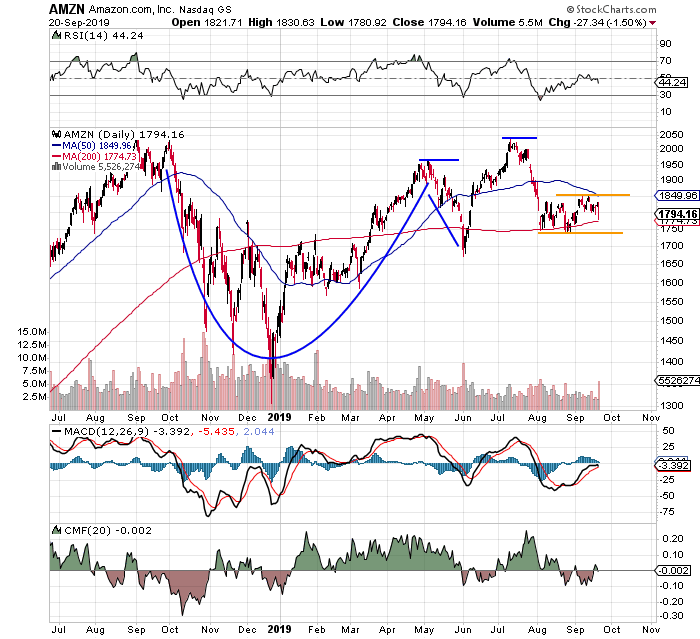 Notice the pop off of the cup and handle that peaked in mid-July. Thus may look like a break-out that failed, because this is Amazon, but the fact is that this particular high ran more than $70 beyond pivot. Yes, I sold some. No, not at that high.

The problem for traders on Monday morning is the last sale at $1794.16, and the proximity of the 200 day SMA at $1774.73. FYI, my panic point for the name has been $1775. My panic point has been pierced on multiple days earlier this summer. That said, the 200 day SMA was indeed lower at that time, and the line largely held. I expect to see a battle here should the down opening indicated by equity index futures markets carry over into the regular season.

I'll tell you what, this is one of those lines that portfolio managers actually do watch, and can provoke action taking. I see not just a piercing, but resistance at the line, and I'm history.

On that note, I am not likely to get too greedy on the Netflix (NFLX) short. I do really think that there is quite a bit of room to the downside, and I do tend to cover my winners (when short) too early. That said, I'd hate to give this back. My target is $250, but I know I'll cover in the $260's given the opportunity. This is one of those names where the cult eventually shows up even if operating cash flow does not.

Get an email alert each time I write an article for Real Money. Click the "+Follow" next to my byline to this article.
TAGS: Federal Reserve | Investing | Markets | Stocks | Technical Analysis | Trading | Defense | E-Commerce | China |