Almost lost in the news cycle is the fact that August Housing data has been rather strong. Heck, August wasn't a bad month at all from a macro-economic viewpoint. Industrial Production came back a bit. The consumer remained strong, even if confidence did ebb going into September. We'll see how spending on the individual level measures up against income on Friday (tomorrow). Those numbers, released by the Bureau of Economic Analysis along with the monthly PCE information painted an an awful picture of disparity between the two for July.

What a day. What a Wednesday. Markets seemed to breathe a sigh of relief after opening lower. First, there was the memorandum of the phone call between President Trump and Ukrainian President Volodymyr Zelensky that showed that at least in that call, the U.S. President had not even brought up withholding military aid, making this "transcript" a far less significant document than previously thought. Markets really got going (The Nasdaq Composite ran 1%, the S&P 500 0.6%) once President Trump mentioned the possibility of a "sooner than you think" trade deal with Beijing. So, is this marketplace sending an "all clear" signal? I doubt it.

Trading volume fell significantly through Wednesday's "up" day from what traders experienced from the Tuesday "down" day, even if the broader indices do stand close to where they went out on Monday evening. This was true at both of New York's major exchanges. This was true for the market's two broadest measures of large cap, multi-national equities. In fact, volume in Nasdaq Composite constituent stocks in aggregate printed 11% above that volume's own 50 day simple moving average on Tuesday, but 3% below on Wednesday. There certainly was an unwind to some degree of the recent sector rotation. Trust it? The water may be fine. Hard to tell with everyone not yet back in the pool.

Wednesday evening. The whistle blower (who is not a witness) report that originally went nowhere was declassified for members of Congress. Early accounts are that this document is more complex than the largely benign "transcript" released on Wednesday morning. This document will come into focus this day as acting Director of National Intelligence Joseph Maguire testifies before the House Intelligence Committee. Markets very likely will react to this.

In addition, the United States Treasury Department has sanctioned several subsidiaries of larger Chinese shipping companies for transporting Iranian oil. Do these two events make the landscape less certain? Of course they do. While this sanctioning might be seen as positioning ahead of high-level negotiations on trade, and may not slow down or speed up a deal, the continued press toward impeachment will concern the nation broadly.

It becomes difficult to imagine the work of the nation getting done while this issue remains central in Washington. I don't know... maybe hold an up or down vote on USMCA. That should be a bi-partisan positive if that's what they are after. Guess time will tell. The administration made sure that Congress could not hold up progress on trade with Japan, and reduced the scope of those negotiations to the point where congressional approval would not be required.

Still Nothing To See Here

At what point do markets become concerned that demand to borrow cash overnight by financial institutions has overrun the available short-term liquidity provided by the Federal Reserve nearly every night? Surely, the central bank has become concerned themselves. On Wednesday, the New York Fed increased the limit on these overnight cash loans from $75 billion to $100 billion, and the size of the two week loans meant to bridge "end of quarter" cash shortages from $30 billion to $60 billion. It seems that nearly every single night what the Fed has made allowance for has been oversubscribed by banks bidding in aggregate for more than had been provided for.

Does the Fed just keep injecting liquidity into money markets every single night forever? After not having had to engage in these markets even one time over a 10 year period? I guess if they have to. What's obvious is that somehow the central bank was "blindsided" by increased issuance of Treasury securities related to deficit spending though this change in fiscal policy had been common knowledge. Oh, Congress could ease restrictions on banks allowing more reserves into the system... perhaps banks could then simply increase short-term lending to each other. I mean if Congress gets bored. Who am I kidding? QE, uhm, I mean POMO is coming. Like it or not.

Peloton Interactive (PTON) , the hippest, coolest thing to happen to virtual instruction across the physical training landscape maybe ever, announced last night that the firm would sell at least 40 million shares at the price of $29 per. This pricing is at the top of the targeted range, and would raise $1.16 billion, placing initial valuation for the entire company at $8 billion. Lead underwriters Goldman Sachs (GS) and JP Morgan (JPM) will have access to an additional 6 million shares that could come to market, so these are for the moment... base numbers.

I have told you what I think about Peloton before. I have nothing against this firm. It's fancy. It's pretty cool, and whatever gets one to exercise is the path that one should follow. I just can not see average Americans paying these prices, and the firm needs them to. For the year ended in June, Peloton sales increased by more than 100% to $915 million. Huzzah!! Net losses however grew faster, as marketing costs have ramped higher. The firm lost $195.6 million over that same year, up from a loss of $47.9 million the year prior.

Do you really want to know why I just don't see ordinary Americans paying extravagantly for Peloton? For $2K plus, the user gets a high-end spin bike with a screen. For $40 a month, the user can stream any number of classes and the machine offers feedback on performance. I have been doing spin classes (and yes, virtual spin classes) ever since I realized that my time as a runner was grinding down and I needed to find a low impact way to still sweat in the way that every athlete is permanently addicted to. There are a lot of quality spin bikes out there for half (or less) the price. There are competitor streaming services offering the virtual experience as well, again for less than half the price. You may just need to find your own way to measure performance. Fortunately, I am old enough where I can still measure my performance through knowing how I feel, by taking my own pulse, and by stepping on a scale. Ground-breaking science.

Oh, by the way... Peloton is currently engaged in a legal issue with 10 music publishers, and stands accused of using more than 2,200 songs without paying licensing fees. The lawsuits asks for a cool $300 million. No sweat.

Was That A Comet?

I guess it was some time in the late 1990's. I was working that day, in the part of the NYSE trading floor known as "The Garage", as it was the first room added to the floor beyond the "Main Room." The NYSE trading floor would expand to five trading rooms at the height of the auction based market with the American Stock Exchange operating it's own trading floor two blocks away. Ahh, good times. Not this story though.

I had always prided myself on knowing every stock symbol that traded on that floor. I felt that I could not be stumped. The I got the order. JBL. What the heck is JBL? Nobody wonders who Jabil (JBL) is these days. On Wednesday, Jabil released fiscal Q4 earnings of $0.88, beating expectations by a penny. Revenue showed growth of 13.9%, but missed the mark. This was not the story for this manufacturer of electronic components.

(For more on Jabil, see Jim Cramer: Here Are 2 Stocks That Know Which Way the Wind Blows.)

The story was the firm's announced $600 million share repurchase authorization coupled with some kind words offered by Argus analyst James Kelleher who maintained his "Buy" rating on JBL, while raising his price target from $36 to $40. Kelleher cites attractive price points for Apple's (AAPL) iPhone 11 as potentially mitigating margin contraction, while also making the point of Johnson & Johnson (JNJ) having expanded their relationship with this firm in production of medical devices as a driver into 2020. 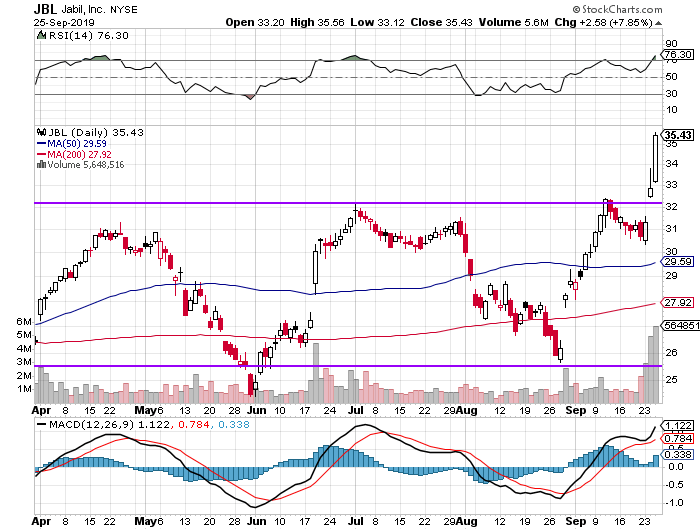 Clearly, here we have the kind of break-out that we look for here at Market Recon. That said, I am not jumping on board. The break happened on Tuesday. When I see these types of moves off of pivot, I tend to go for a 20% move from that point. This is for a trade, not an investment. I found that over time, in a bull market that when one refuses to give up on a stock until it is either +20% or -8%, that a trader can win more times than they lose, and all the while never take a severe beating. Again, this "soft" rule is for trading and not for investment.

Well, Jabil is already 12% above pivot,and just 12% from Kelleher's new target. I am just not sure this equity is worthy of the risk. That said, JBL reports again in late December. December 20th $32 puts (that expire ahead of earnings) paid about a dollar late last night. Selling those might be a risk averse way to turn a buck now, offering a net basis of $31 should the stock get whacked. At that point, you'll have the company buying shares as well.

Get an email alert each time I write an article for Real Money. Click the "+Follow" next to my byline to this article.
TAGS: Earnings | Federal Reserve | Investing | Markets | Options | Stocks | Technical Analysis | Trading | Technology | Stock of the Day

BMY is breaking out to a new high.