The King of Ephyra

Punished for all eternity. The result of his own ego, his deceptions. The efforts of Sisyphus. There are many ways to push the boulder up the hill. Loose policies, both monetary, and fiscal. Corporate repurchase programs. Kicking can after can down the long and winding road. Still, something happens along the way. Growth slows. Tariffs sometimes come out of left field. Margins narrow. Ultimately, the boulder will roll. That's okay. We are not Sisyphus. We may at times deceive even ourselves, through our results driven interpretation of all that impacts price discovery, but in the end, we are almost always offered another chance. As long as we understand. This is where it all starts. Step one. This is the rock upon which both defense and opportunity intersect. This is where we improvise. This is how we learn to adapt. They say that there is a thin line between love and hate. The line may be even thinner between victory and defeat. Try to enjoy not the beatings, that's impossible... but the experience, the ability to further one's learning curve. To grow. Really. How wonderful.

Correction!! Oh my. Pretty sure we told you two weeks ago that equity markets had entered a state of correction. Now, by textbook definition, the tech heavy Nasdaq Composite and the even tech heavier Nasdaq 100 are more than 10% off of their highs. This came amid a very odd session. Yes, the tech sector broadly gave up 2%, led lower by the Communications Services sector as the once glorified FANG names were abandoned by investors... in size.

The fact is that broadly, Monday was not such an awful day across the equity marketplace. Why is that? Let me explain. Pairs trades? Yes, to some degree, but not as precise or ratio driven in terms of size or price as a typical pairs trade might be. Less math, more panic. Panic? A good number of large funds ran for the hills, gang. Volume at the Nasdaq was the highest it's been in a couple of months. Meanwhile, at the New York Stock Exchange, advancing issues nearly beat declining issues by a 2 to 1 ratio on advancing volume that beat declining volume by almost 3 to 1. Simply put, traders at the larger institutions were driven either by risk managers or simple fear out of FANG and information technology, and into anything else. Are they going to put funds labeled for growth in sovereign debt, or leave it in cash? What do you think? These guys all copy each other. A nice portion of that money ended the day in Materials and Energy thanks to a suddenly softer U.S. dollar. Then some dough was parked in badly oversold industries such as Financials and Transports.

Why this matters so much to us is simple. I have told you that once the worm turns, we look for higher prices on higher volume. At least for some beaten down type names, the time to focus may be upon us at some point this week. Don't freeze on me, or tune out because you've been punched in the nose. Everyone gets punched in the nose. Look for confirmations across your already refined shopping lists because you had already raised cash.

Readers know that I sold half of my Amazon (AMZN) long on Friday morning, and bought some back late on Monday. Understand this. This was not a reinvestment of funds. A simple $116 per share extraction of capital. The FANG names will remain under the threat of increased regulatory pressure for the time being. My trade here is a simple short-term attempt by a financial mercenary to pull some dough out of the marketplace. Remember, I'm still babysitting my position in Zuora (ZUO) , so I am motivated here. Fall in love with no name, and be willing to turn against any name in a heartbeat.

I do believe that the broader tech sector to include the Communications names that belong in the tech sector will remain under pressure due to not only the overt threat against Amazon, Alphabet (GOOGL) , Facebook (FB) , and Apple (AAPL) by regulators, but against semiconductor names as well due to conditions impacting global economic growth, and subsequently wafer inventory levels. What that leaves trading at a discount, would be software... aka .. the cloud. These names are not under attack by government agencies and are for the most part, not heavily exposed to Chinese revenue. The threat to this group now is that they are by standards of fundamental analysis... overvalued. That was okay, when money was chasing these names. My opinion is that the real high quality names that I really like, such as Adobe (ADBE) , ServiceNow (NOW) , and VMware (VMW) will come out on the other side, but without the broader benefit of capital chasing certain ETFs that broadly include tech stocks of all types, there could be an adjustment in valuation versus other groups. Run for this hills? No. Mind your panic points? Every day.

This environment makes Salesforce (CRM) earnings quite dangerous this evening. Readers know that I started exiting that name when my $154 panic point had been breached. I am flat the equity going in, but there is a good chance that either a bull or bear spread will be on the table by tonight. That depends on which way the wind blows ahead of the digits. Regardless, the play will be risk averse in nature.

Finally, a guy that gets it. "Both inflation and inflation expectations remain below target, and signals from the Treasury yield curve seem to suggest that the current policy rate setting is inappropriately high." That's what St. Louis Fed Pres James Bullard, a voting member on monetary policy in 2019, said on Monday from Chicago. Isn't Bullard a perma-dove you say? Of late, yes, but this is a leader on monetary policy not afraid to opine away from the group think at the Fed, and I have learned to respect his opinion. Bullard also opined on the benefits of acting on a rate cut "soon", whatever that might be. June 19th?

Listen, my concern here is to repair the yield curve. You all know this. I have harped on repairing the yield curve since before it was semi-permanently damaged by the Bernanke Fed in the early days of the decade. With both growth and inflation quite suspect moving forward, there is no realistic hope to juice the long end. Not soon anyway. With foreign central banks already so far down the rabbit hole that they have forced their own citizens to seek yield where ever it is. U.S. Treasury paper offers some yield, and would be much safer than where higher yields might elsewhere be available. Hence, they come. The Chinese can sell Treasury securities all day long if they want. Pretty sure the bid side would show up. In order to restore a more normal looking curve that might allow for at least a little less distortion in free market price discovery across the realm, short-term rates must be reduced. There is no longer a maybe in my mind.

Along these lines, JP Morgan on Monday forecast that the FOMC will be forced to cut the Fed Funds Rate by 50 basis points by year's end. Futures trading in Chicago are currently pricing in no chance of a rate hike this year, and a 2.8% chance that there will be no cuts. That's right... 2.8%. That means that according to this market, there is now a 97.2% chance that short-term rates will be lower within six months. There is now an 81% probability that there will be two cuts, a 47% likelihood that there will be three cuts, still a 13% chance for four, and incredibly a 2% chance that the Fed Funds Rate will be 125 basis points lower. That's still in six months. Almost as likely as is "no change." Oh, the Reserve Bank of Australia cut their benchmark overnight, and had talk radio throughout the wee hours here in New York discussing the likelihood of a rebirth of Quantitative Easing down under.

Apple executives likely did not see that coming. While the firm had put together an impressive "dog and pony" show out west in order to impress both consumer and investors, a story that ran at Reuters kind of dropped a bomb on the stock. The report addressed the potential of possible Department of Justice action being taken against Apple, and would be linked the Alphabet probe. 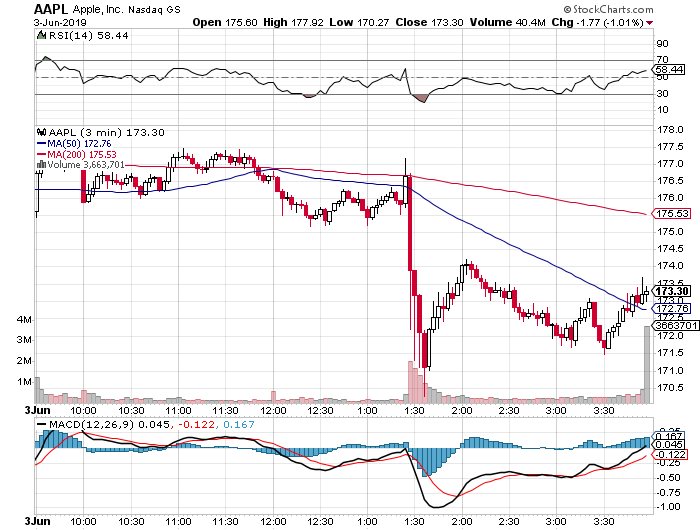 One easily sees when this news broke, undoing all of the positive vibes that had emanated from announcing a new Mac Pro, a new versions of operating systems for the iPhone, iPad, Apple TV, and Apple Watch. As a consumer, the watch sounds interesting. I have an iPhone, but it's so old I don't remember, and I don't care what iteration it was. It still works. A bunch of the apps don't. So what. It's the stock I care about anyway, not the fluff. The circumstance of a potential regulatory hurdle can not be taken lightly. I wrote you recently describing how respecting my target prices and panic points had gotten me out of 70% of my Apple long at better prices. Fact is that I'm still wearing 30% of this position. This is my adjusted plan. 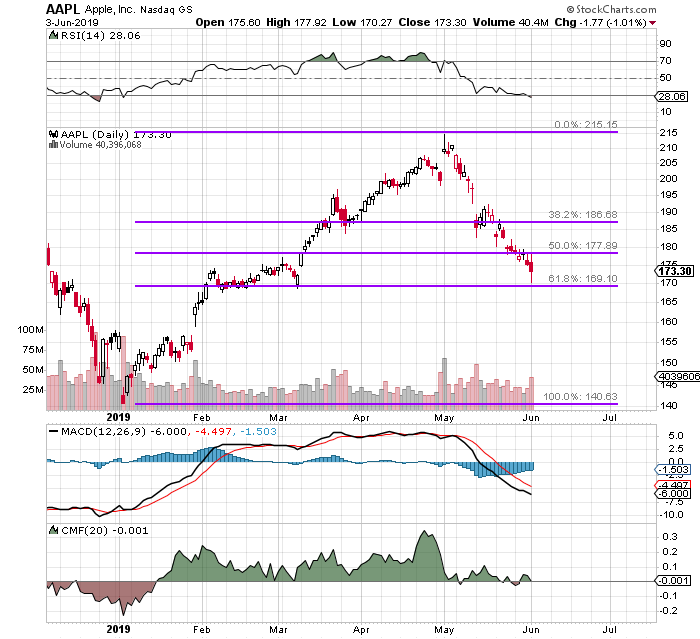 See how the 61.8% retracement level (of the December through May rally) seemed to work like a charm on Monday? So did the algos. That's the spot. That breaks, and for me... it's see ya!! For the short-term, an ability in what looks to be a rising market, to retake the $178 level would be highly encouraging. Buy more? Not in this China/Trade War/DOJ environment, but let's see if we can improve on price for the balance of this holding.

Get an email alert each time I write an article for Real Money. Click the "+Follow" next to my byline to this article.
TAGS: Economy | Federal Reserve | Investing | Markets | Stocks | Technical Analysis | Trading | Software & Services | Technology | Earnings Preview