By BRUCE KAMICH Jun 04, 2019 | 11:53 AM EDT
Stocks quotes in this article: GOOGL, FB
During Monday night's Mad Money program on CNBC, Jim Cramer talked about the new crackdown against tech giants like Alphabet ( GOOGL) for antitrust violations (read  here)  and increased scrutiny of Facebook ( FB)  , both of whom President Trump sees as political opponents.
Let's check out the charts of FB today.
In this daily bar chart of FB, below, we can see that the month of May has been hard on the FB bulls. Prices found some support around $180 until it broke sharply, closing below the cresting 50-day moving average.
A few days later FB was/is testing the declining 200-day line. The $160 support area from the lows of February and March could also give way with the $150 area the next logical target.
The On-Balance-Volume (OBV) line has made a new low for the move down from its late April peak.
The trend-following Moving Average Convergence Divergence (MACD) oscillator is below the zero line now for an outright sell signal.

In this weekly bar chart of FB, below, we see some weakness. The big picture price pattern looks like a possible top or distribution pattern with a first peak around $220 followed by a second peak short of $200. Prices have weakened in recent weeks and are poised to test or break the flat 40-week moving average line.
The weekly volume bars look like they have contracted since last June but the weekly OBV line has only recently declined a bit.
The MACD oscillator is crossing to the downside for a take profits sell signal.

In this Point and Figure chart of FB, below, we can see that prices are close to reaching a downside price target of $161, but a decline to $158.62 would be a triple bottom breakdown and could precipitate further declines. 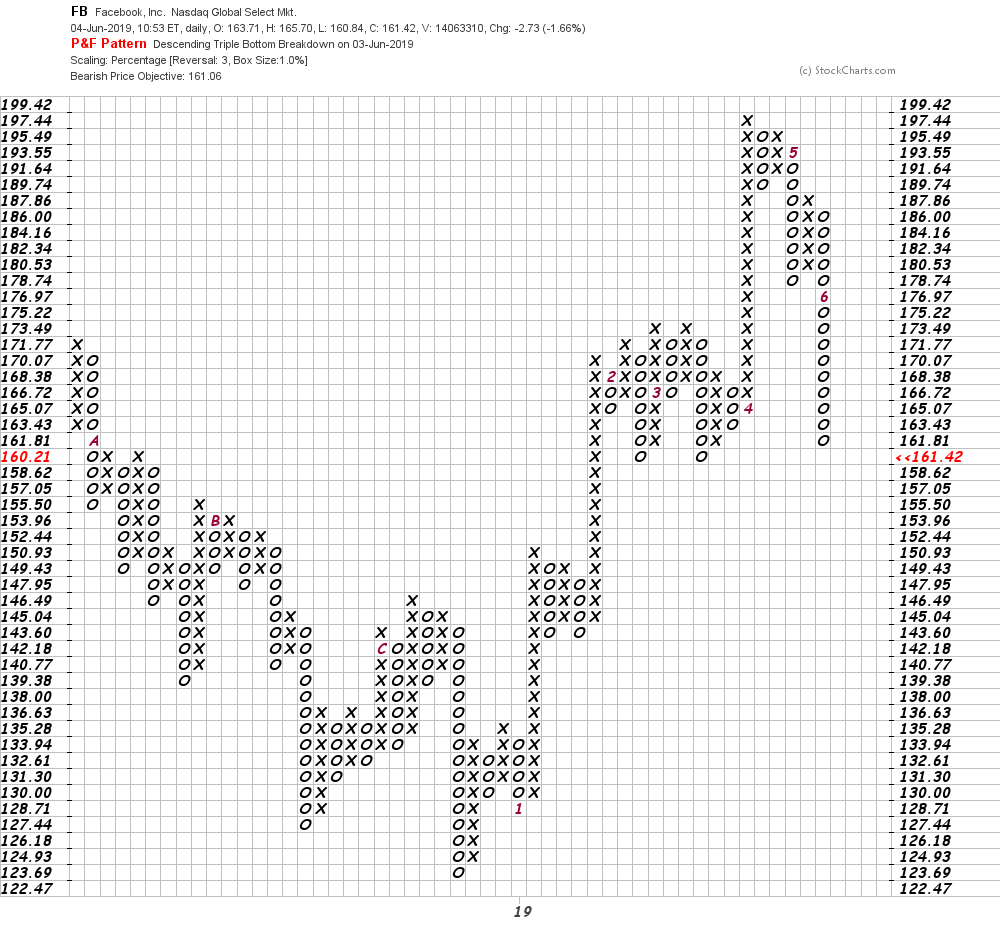 Bottom line strategy: Will FB hold the $160 area and work higher from there? Maybe. But one more tweet or bad news headline could knock prices still lower. I don't feel confident about the long side of FB.

Get an email alert each time I write an article for Real Money. Click the "+Follow" next to my byline to this article.
TAGS: Regulation | Investing | Stocks | Technical Analysis | Trading | Media | Software & Services | Technology | Advertising