Facebook (FB) has a problem. In fact, social media to include such names as Twitter (TWTR) has a problem. Once one starts thinking about ETFs and passive investment styles, it becomes easier to see a path toward pressured equity prices for the entire Communications Services sector... unless said problem were to be "nipped in the bud". That said, should a corporation targeted for a socially conscious boycott try to nip said problem in the bud, said problem might just grow. Grow, it has.

The effort against Facebook seems to have begun on June 17th as the "Stop Hate for Profit" campaign organized the boycott of advertising on Facebook's platforms. The effort had grown, and even gone global. Facebook CEO Mark Zuckerberg announced new plans on Friday to prohibit "hate speech" in advertising, as well as protect targeted groups from being attacked. The problem is that the platform would label such posts that would be in violation of these policies but that certain posts (such as those made by politicians) could remain published if deemed to be "in the public interest."

There are those who feel that these new measures just do not go far enough. More than 160 companies have joined the boycott, and there are some pretty big fish in the group. By big fish, I mean large publicly traded companies that garner the attention of the consumer when they act. Sort of the opposite of what these companies have used social media platforms for (catching consumer attention) prior to this issue taking center stage.

Investors have to ask themselves... just how severely does this hurt a firm like Facebook? The firm's platforms, primarily Instagram, WhatsApp, and Facebook are wildly popular, particularly in this era of Covid. Most folks, especially in hard hit areas are staying in touch with their own social circles through the internet and not in person. Facebook has a base of more than 8 million advertisers, so is 160 a huge number? Maybe not in dollar terms, relative to what remains. Maybe in impact though, if the quality of those boycotting, which is significant, spreads to others across the base.

The names are names that you have heard of. The cause caught some attention when Ben & Jerry's ice cream decided to boycott. Ben & Jerry's is not just some boutique ice cream maker. Ben & Jerry's is Unilever (UL) . Unilever is a multinational conglomerate that spends $2 billion a year on advertising. Unilever is both Breyer's and Klondike. That's just in ice cream. It's also Hellman's, Knorr, Lipton, Dove, and Noxzema, as well as a host of consumer brands. We move on to bigger names, including Coca-Cola (KO) , Starbucks (SBUX) , Hershey's (HSY) , Levi Strauss (LEVI) , Verizon (VZ) , Diageo (DEO) and more. Now add a number of key organizations that include the Anti-Defamation League as well as the NAACP.

Facebook reports on July 25th. The quarter is over. Most of these boycotts will only go into effect on July 1st, and will last anywhere from a month to six months depending on how that advertiser goes about allocation of these funds. That means that this is not a revenue story until Q3 at the earliest. Q2 earnings are expected to show growth on both the top and bottom lines. Will that be what investors are focused on in four weeks? Facebook has been forgiven time and again by investors, but part of the reason why was because of the engine that is on-line advertising and how many eyeballs that Facebook could provide in terms of engagement. Suddenly it is this level of engagement that is the story behind the social cause. Interesting? Yes. Especially in an election year.

Buy the dip? Nope, not me. not today. Then again, long-time readers know that I have never been a fan of this firm or its management. 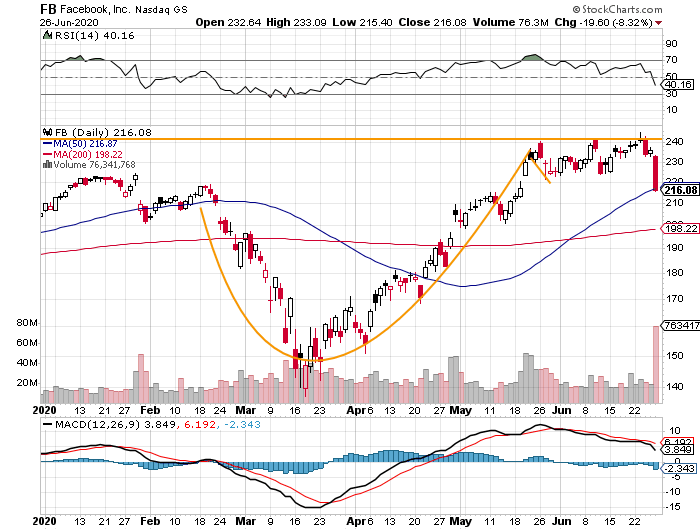 Fellow chart enthusiasts will note that this stock has now failed at pivot three times since building a nice looking cup with handle that did not provide the hoped for breakout. Relative Strength is on the weak side, and the shares closed just below their own 50 day SMA on Friday. Retaking that line is imperative on Monday for Facebook bulls. My opinion? A test of the 200 day SMA is more likely than not prior to earnings on the 25th.

(Facebook and Starbucks are holdings in Jim Cramer's Action Alerts PLUS member club. Want to be alerted before Jim Cramer buys or sells these stocks? Learn more now.)

Get an email alert each time I write an article for Real Money. Click the "+Follow" next to my byline to this article.
TAGS: Earnings | Investing | Markets | Stocks | Technical Analysis | Trading | Media