I guess it stands to reason. At some point after seemingly endless inquiry, that the leadership at Facebook (FB) might cry "uncle." Perhaps that's what this is. Perhaps not. In a highly publicized op-ed published in the Washington Post over the weekend, Facebook CEO Mark Zuckerberg called for increased government regulation of the internet. Areas that Zuckerberg think need attention would be those of harmful content, privacy, data portability, and not surprisingly, election integrity.

Those in search of a little background do not have to look far. Last week, HUD (The Department of Housing and Urban Development) charged Facebook with discrimination regarding it's advertising practices. There are questions as to whether these practices allowed landlords to focus advertising toward targeted audiences organized by race, gender, and/or ethic background. Facebook has also been forced to face investigation over data protection issues across several nations in the European Union.

Seems so. That's when you first heard the name Cambridge Analytica. That's sort of a point where many of the issues that now swirl around data privacy and the potential influence over national elections through the use of social media as a tool first come to light. Since then, the FTC (Federal Trade Commission) has investigated whether or not the firm had violated a 2011 agreement requiring that Facebook seek and receive explicit permission from platform users prior to sharing data. Several government agencies have either looked into or are still investigating Facebook regarding the governance of personal data. I am not going to go through these items one by one as I am not a lawyer, nor do I consider myself a journalist.

What I am, in my opinion... is a trader who writes about his trading, who given his economics background has no problem opining on monetary and fiscal policy as well. Bottom line is that I like Facebook, the social media platform. Through the service, I have maintained old friendships that in another era might have gone by the wayside. That's the purpose for me.

As for the stock, I tend to not invest where I have a poor opinion of management. That is most certainly the case here. Just my opinion. You can have your own.

Back to the op-ed. Be careful what you wish for. Perhaps there is fear of a regulatory crackdown, and an effort to get in front of that. Perhaps this is an effort to cut pressure to break up business lines somewhere in the future off at the pass. Perhaps, the leadership at Facebook does not feel, and the evidence I guess would be there, that they are not up to the task? Either way, there will be political leaders that will happily grab onto the opportunity to control rules regarding not just social media, but the internet. Is that what we want? There is a definite need for both rules and enforcement. No doubt. Inviting a larger role for government in what is now the way a larger percentage of people get their news than ever before could be a bad thing. I don't know the answer. 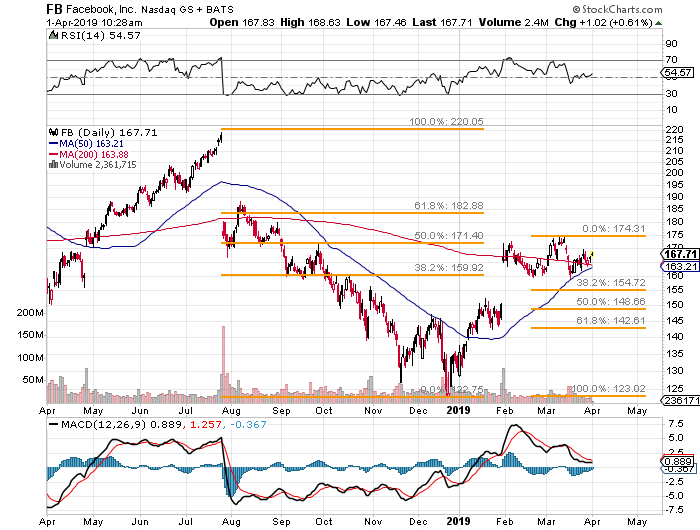 The chart is rather positive. The likelihood of an imminent "Golden Cross" (50 day SMA over the 200 day SMA) is obvious. I think the name could go as far as 174 based on a subsequent algorithmic response. As the firm moves Instagram Stories toward the same emphasis on monetization as experienced at Facebook NewsFeed, the stocks can go higher than that. I just don't need the name on my book. A trader looking to take discounted risk on the name can still get paid $3.75 for a May 3rd $160 put. Earnings are due May 1st. If the trader does get tagged, at least that trader would run with a net basis of $156.25. That's a 6.6% discount to the last sale on my screen of $167.37.

Get an email alert each time I write an article for Real Money. Click the "+Follow" next to my byline to this article.
TAGS: Investing | Options | Stocks | Technical Analysis | Trading | Media | Technology | Advertising | Stock of the Day