Quickly... she moves up the ranks of Sarge's favorite CEOs. I speak of United Parcel Services (UPS) CEO Carol Tome, formerly the famed Treasurer and CFO at The Home Depot (HD) . Tome took the reins at UPS at the height of a global health crisis (June 2020), and immediately put her "better not bigger" stamp on the company's operations. The strategy prioritized higher margin deliveries over volume. The results are apparent.

This (Tuesday) morning, UPS released the firm's first quarter financial results. The firm posted adjusted EPS of $3.05 on revenue of $24.4B. Both of these top and bottom lines comfortably beat Wall Street, while amounting to year over year earnings growth of 10.1% on revenue growth of 6.4%

The firm posted consolidated operating profit of $3.3B, which was up 17.6% over the same period last year.

- Consolidated revenue of about $102B, which is just about spot on Wall Street's consensus.

- Adjusted return on invested capital above 30%.

In addition... This is the headline maker... UPS announced plans to double its share repurchase program for 2022, targeting $2B for the year.

As of March 31st, UPS ran with a net cash position of $12.545B, and current assets of $25.601B, which was up small from three months earlier. Current liabilities dropped over three months to $16.842B. This leaves the firm with a current ratio of 1.52, which is healthy and does pass the Sarge test. Total assets amount to $70.113B, which easily outweighs total liabilities less equity of $54.679B. Goodwill and net intangibles combined at up to $6.133B, which though sizable, do not upset the positive balance. Adjusted free cash flow for the quarter totaled $3.915B, up from $3.712B a year ago.

I like the quarter. I like the guidance. I like the 3.21% dividend yield. I like the beefed up buyback. What I do not like is the economic environment. The e-commerce boom has turned into a permanent condition that even in the absence of Covid-related shutdowns, will likely benefit both UPS and rival FedEx (FDX) over the long-term if they manage it right. I am sure that Carol Tome will do a solid job managing this business. I have far less confidence in FDX. Hence, my long position in this name and not in that name.

Still, there is not much that can help if the war in Europe continues to force food and energy prices higher, while central banks, led by the Federal Reserve, try to fight inflation through demand destruction. An economic slowdown is an economic slowdown. UPS, despite being a delivery services company heavily reliant upon commerce, does sell something quantifiable and does return capital to the stakeholders. In my view, even in this environment, UPS remains attractive. Fuel prices could change that, but not right now, not right here. 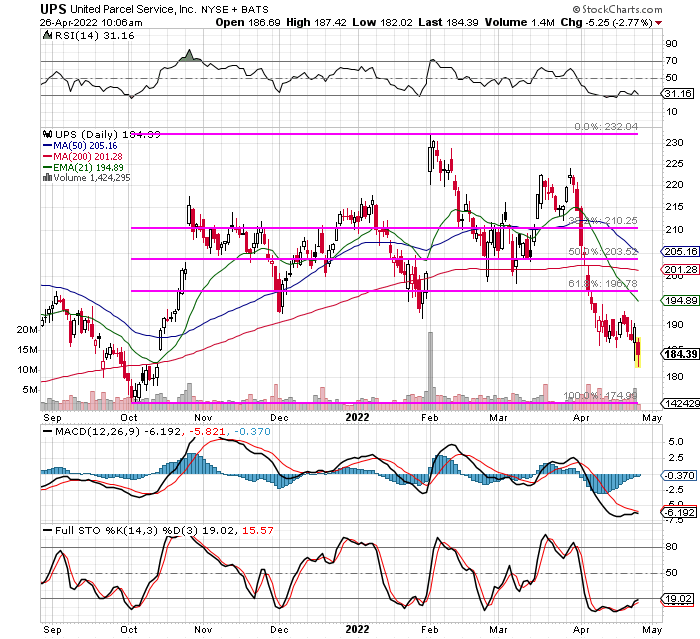 Readers can see that UPS has come almost full circle since early October. Could I have sold this one at $230? I guess I could have. That point is at this point, neither here nor there. UPS appears to be technically oversold. The stock's Relative Strength reading has been scraping the 30 level since early April, The Full Stochastics Oscillator is even worse. The daily MACD, however, even with all three components standing in negative territory does appear to be poised for a bullish crossover of the 26 day EMA by the 12 day EMA. That would be nice.

I fully expect UPS to trade down to the lows of early October. My plan is to add in between $180 and $175 given the opportunity. Here is my current plan in its entirety...

(UPS is a holding in the Action Alerts PLUS member club. Want to be alerted before AAP buys or sells UPS? Learn more now.)

Get an email alert each time I write an article for Real Money. Click the "+Follow" next to my byline to this article.
TAGS: Dividends | Earnings | Economy | Investing | Stocks | Technical Analysis | Trading | Transportation | E-Commerce