Earnings reactions are funny things. In one swift moment, a company is suddenly worth 10% more or 10% less. Trading action becomes a whipsaw of flippers and hedgers. Reactions and overreactions become the name of the game as a forward-looking, "efficient" market attempts to determine the proper valuation of a company based on the past three months and a projection for the next few months. Note, these projections are often subject to change.

And while we love to instantly react to a single number or two, often the forest can be lost in the trees. I believe that is the case with Etsy (ETSY) . The stock is trading lower by 11.5% midday on Thursday after the company's Wednesday report. Etsy operates an e-commerce platform on which its users can make, sell, and buy goods online and offline around the world. Basically, it's a two-sided marketplace for unique crafts and goods. Etsy prides itself on the creativity you can find on the website.

For the most recent quarter, Etsy reported earnings of $0.24 per share on $169.3 million in revenue. The bottom line number bested expectations by a dime while revenue was a rounding error below analysts' estimates. The company then bumped the bottom end of revenue, gross merchandise sales, and EBITDA higher for 2019. Traders did not like the numbers although several analysts raised price targets for the company.

Part of the challenge for ETSY bulls is the huge run the stock has experienced over the past 12 months. Shares had been up 119% during that period. Add in a weak market today and a revenue number that didn't blow the doors off expectations and you have a reasonable explanation for the selling. Short-term opportunity or new long-term bearish trend?

I believe it is an opportunity. Buried in the headline is the company repurchased $27.5 million in stock. No, that isn't a huge number, but the average buy was around $51.89 and it shows some believe value exists in the shares. Additionally, the company reduced its accounts receivable significantly. If the reverse had happened, it would have been a huge red flag, but no one is mentioning this positive development. 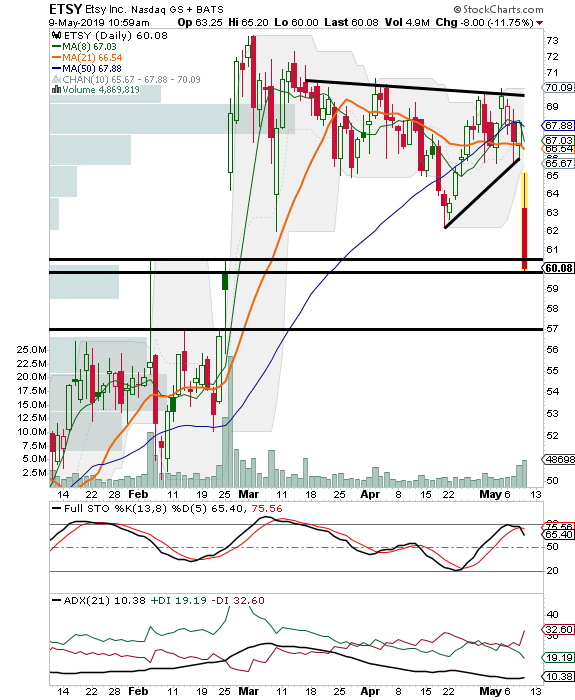 Etsy reduced marketing investments during the quarter as it focused more on search and discovery as well as cloud migration. By using the cloud, Etsy has more elastic computing power to leverage sophisticated algorithms. I view this as a work smarter, not harder approach. The company loves to test different approaches to interaction, search, selling, and marketing. These tests have proven to create efficiencies and business evolutions within Etsy in only two years. For instance, by increasing conversations between buyers and sellers, "leads" are converted at 13 times the normal rate with a 200% typical average spend. By knowing this, Etsy can focus on different methods, through testing, to increase conversations. It can create some short-term bumpiness to create long-term, consistent and efficient growth.

Despite cutting marketing expenditures, Etsy did expand into television advertising: TV, cable, and digital video ads are aimed at changing the brand health and perception. Through surveys, Etsy found that many people don't view Etsy as a place where "I buy things," so a change in this perception through advertisements should translate to more sales over time.

I view the above as very positive developments. Etsy has an active management working to constantly improve business rather than sitting back; however, none of the changes are drastic. They're tweaks to fine tune a profitable process.

As long as the $60 level holds this week, Etsy is a name I believe worth nibbling on here to begin a position build.

Get an email alert each time I write an article for Real Money. Click the "+Follow" next to my byline to this article.
TAGS: Earnings | Economy | Investing | Markets | Stocks | Trading | E-Commerce | Stock of the Day