By BRUCE KAMICH Sep 20, 2019 | 11:27 AM EDT
Stocks quotes in this article: RVLV, ETSY
During the Lightning Round of Thursday night's "Mad Money" program, a caller asked Jim Cramer about Revolve Group ( RVLV) . Cramer's response: "I like this one and Etsy Inc." ( ETSY)
Revolve has not been trading for long, but we have good price history to work with on Etsy, the Brooklyn, N.Y., online marketplace for craft supplies and vintage goods. Let's look.
In the daily bar chart of Etsy below, we see that prices rallied from last October to early March. From early March to late July the stock traded sideways, and in August we saw a correction to the downside.
Prices broke below the 50-day moving average line and then closed below the 200-day line as well as breaking support around the $55 area.
Etsy did not bounce until early September in the upper $40s.
During the sideways action and the August decline, the On-Balance-Volume (OBV) line was pretty steady, which suggests that longer-term investors held their positions and did not become aggressive sellers.
In recent days ETSY has recovered half the August decline and is now above the declining 50-day moving-average line and testing the rising 200-day line.
Trading volume recently has increased and the OBV line has improved. The trend-following Moving Average Convergence Divergence (MACD) oscillator is back to the zero line and a possible go-long signal.

In the weekly bar chart of Etsy below, the price action of the past few months looks like a normal correction, with prices poised to move back above the 40-week moving-average line.
The weekly OBV line is close to making a new high for the move up. And the MACD oscillator, while below the zero line, is narrowing toward a cover-shorts signal.

In the Point and Figure chart of ETSY below, we see a potential upside price target of $86 being projected. 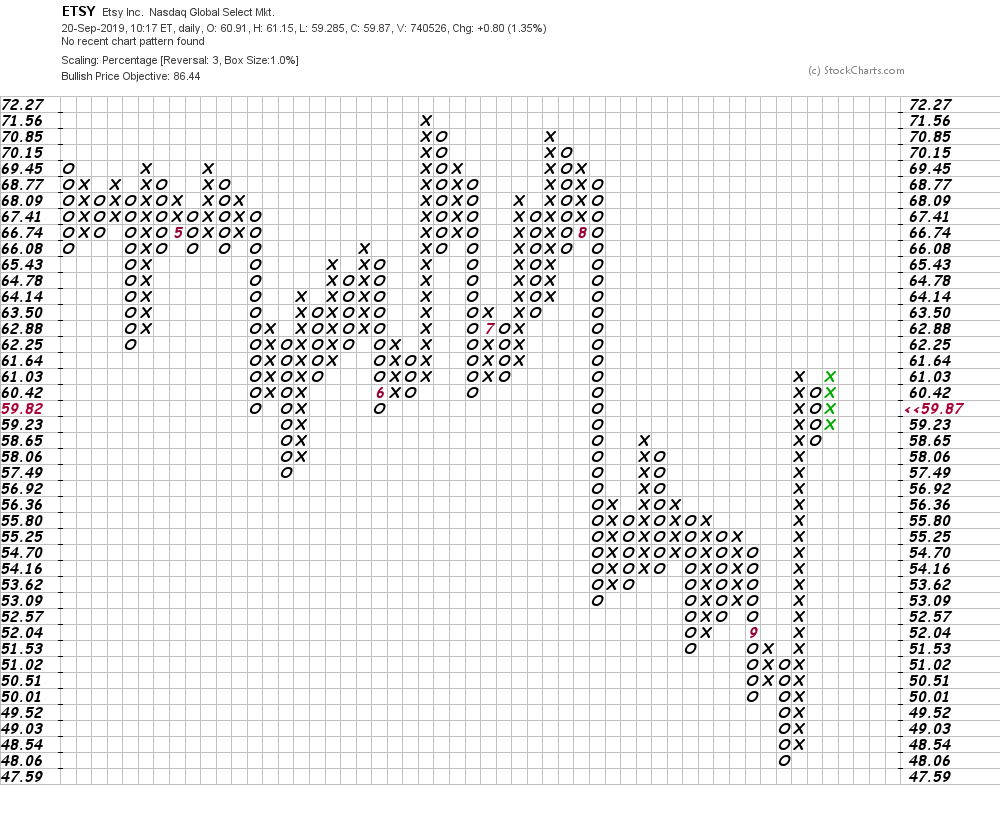 Bottom line strategy: Etsy still has to overcome chart resistance in the $60-$72 area, but the bigger picture looks as if new highs can be reached. Approach Etsy from the long side and risk a close below $54.
Get an email alert each time I write an article for Real Money. Click the "+Follow" next to my byline to this article.
TAGS: Investing | Technical Analysis | E-Commerce | Mad Money