All it took was one decent day of selling to hammer the major market ETFs back beneath their 21-day exponential moving averages (EMAs) and send bulls back to their hidey-holes. Last week's narrative regarding the market's sustained uptrend and the likelihood that the bear market is over has already been replaced by whispers of caution and a resumption of expectations for another three-quarter-point interest rate hike in September.

With earnings season winding down, traders' focus is shifting toward the Fed's Jackson Hole economic symposium later this week. Given the slight dip in the Consumer Price Index (CPI) report earlier this month and the Fed already instituting several aggressive rate hikes, I don't believe most traders are expecting a lot out of Fed Chairman Jerome Powell when he speaks (I think on Friday). With the fed funds futures market predicting an approximate 50% probability of another 75-basis-point hike in September, traders will likely be listening for confirmation that after September the Fed will adopt a data-dependent, wait-and-see approach. In short, I don't believe anyone is expecting a surprise announcement out of Jackson Hole this week, which likely means it will be a relative nonevent when it comes to volatility.

A few traders requested some thoughts on the SPDR S&P 500 ETF (SPY) , so let's look at that chart. 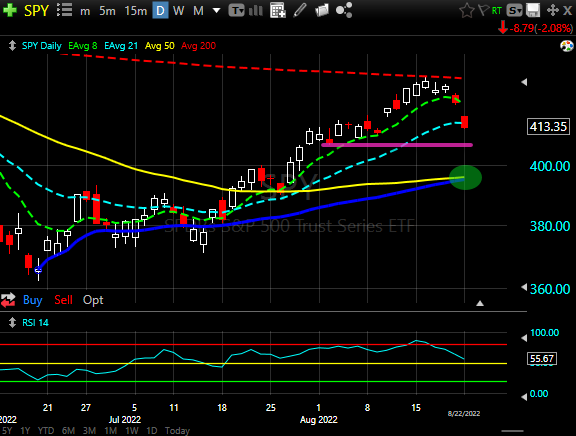 While I trade the Invesco QQQ Trust (QQQ) most often, the price action in SPY isn't much different. The bulls lost the 21-day EMA on Monday and they're one bad day away from testing early August support. As a scalper who prefers to trade from the long side, I'll look for reasons to fade weakness toward $407 (the purple support line). But it's worth noting that a dip to $407 will likely send the Relative Strength Index (RSI) plummeting under 50, and that's rarely a great time to start getting long.

My preferred area to look long, especially for swing trades, will be the area circled in green. That area represents the 50-day simple moving average (SMA) and volume-weighted average price (VWAP) anchored to the mid-June swing low. Ideally, a VWAP and 50-day SMA test will also be accompanied by an oversold RSI reading.

Regardless of your trading time horizon, it's important to remember that just as the bulls didn't want to listen to words of caution a week ago, a drop toward the anchored VWAP and 50-day SMA will likely encourage the bears to the point of predicting new bear market lows. As always, keep an open mind, avoid listening to the perma bulls and bears, and trade what you see and not what you want to see.

Get an email alert each time I write an article for Real Money. Click the "+Follow" next to my byline to this article.
TAGS: ETFs | Federal Reserve | Index Funds | Interest Rates | Investing | Trading | Real Money

The Big Question for Me Is Positioning, Specifically in Equities

It's hard to buy the "everyone is bearish" argument, but there are reasons to believe there could be selling pressure as the end of the year approaches.

Don't Expect This Rally to Last, So Put in Stops Now to Protect Your Profits

It won't be surprising to see folks focus on earnings estimates being too high once late December and early January roll around.

This REIT-focused offering from Blackrock/iShares is just a week old.