As we head into the final month of 2022 I thought it might be interesting to see if I could spot any trends that have been emerging in the final stretch of this year. Looking through the top 50 non-leveraged ETFs on a price return basis since Sept. 30, one thing I noticed was that aside from some energy-based funds seeing a resurgence there are 21 funds that are either eurozone or eurozone-country focused making the top 50.

I've pulled some sample funds and as you can see from the chart below, Europe as a whole has been under stress throughout the year with the exception of Turkey. Technically speaking, Europe has been in what is known as a continuation pattern, making both lower highs and lower lows throughout 2022. Indeed, the bulk of these countries are looking at negative year-to-date returns of 15% to 20%-plus. 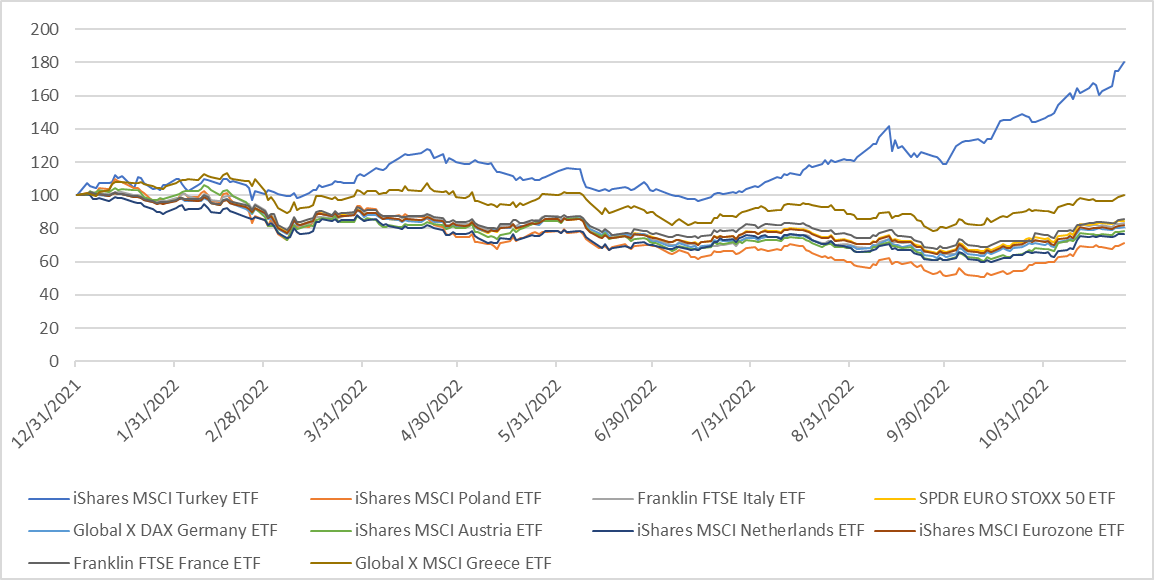 Source of charts: Factset, All You Can ETF

At this point, I think we all understand the drivers of this year's downward trend in Europe. What's interesting to me is that while there is a clear dip in February due to the Russian invasion of Ukraine, it's not like Europe was in strong rally mode coming out of 2021.

Throughout this year there were concerns about global food shortages emerging in spring and persisting through the summer growing season. However, as it turned out, while there were disruptions in both planting and shipping, enough seems to have been planted and protected shipping lanes have been established to ensure timely delivery.

The other big issue has been the energy picture, with global sanctions levied against Russia, not to mention Russia's cat-and-mouse game of intermittent maintenance on its pipelines and the undersea explosion that shut down the Nordstream 1 pipeline earlier this quarter. Once again, though, through China and India acting as brokers, much of that embargoed oil and gas has managed to make its way to global markets.

Further, strong natural gas restocking coupled with mild temperatures so far have reduced concerns about an all-out energy catastrophe in the region. To be clear, certain countries such as Germany, Italy, and Spain have gone as far as to regulate thermostat settings in both commercial and residential properties, but there has yet to be an outright lack of available fuel, although that fuel is still very expensive.

So what about Q4?

As you can see from the table below, the fourth quarter has seen these markets make up lost ground. As it turns out, only Greece was able to get itself back to even, eking out a 0.34% gain as of last Friday, Nov. 25. The interesting thing to me is that I can't put my finger on a catalyst for this regional rally. I understand that Europe being down 35%+ as we entered the fourth quarter might have represented an oversold market, especially given everyone's worst fears not materializing. However, I don't see that the global macro picture has changed all that much. The US dollar has seen bouts of weakness, but that has more to do with markets' perception of how hawkish or dovish the Fed appears to be on any given day.

To get a better sense of what has been driving returns, I downloaded the holdings from the iShares MSCI Eurozone ETF (EZU) and ran some attribution for the quarter-to-date period, as seen in the table below. A caveat on my calculations is that the process resulted in my calculating a period return that was about 4% higher than the fund actually returned, but for the purpose of gauging overall drivers of performance this gets us comfortably in the ballpark.

The results in the column titled "Sector Contribution to Period Return" are not sector returns. These figures represent the percentage of overall fund return that can be attributed to a given sector. I got these figures by summing my weighted average returns of fund constituents and dividing the result into the fund total return for the period, which is why they do not total 100%. 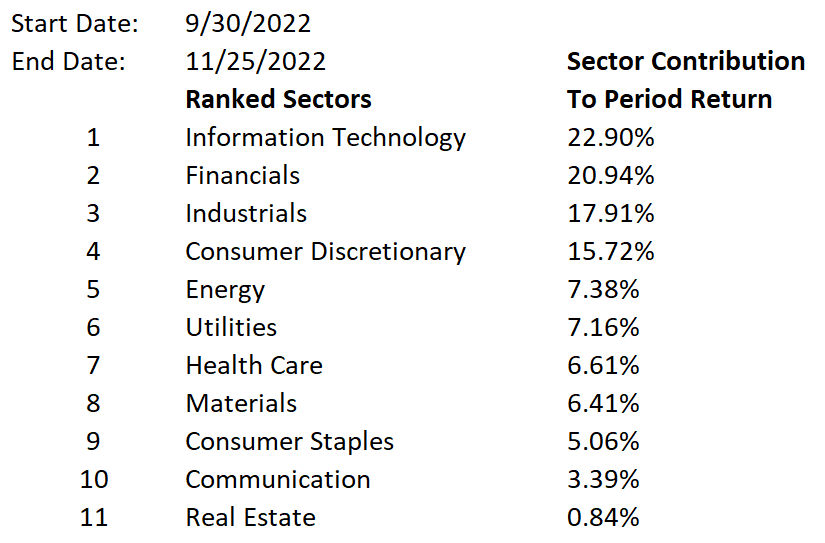 As you can see, drivers of return in the quarter-to-date period that ended last Friday seem to be Information Technology, Financials and Industrials, which combined to account for just under 62% of period returns.

Much like the US, pundits (EU Commission, Russell Investments) in Europe are calling for a recession in 2023. Inflation, while starting to roll over, is still at historic highs and there is still a lot of uncertainty about the war in Ukraine, not to mention recent developments in China regarding both its latest round of what can only be described as draconian Covid crackdown measures and the country's pivot further away from a free market model.

Also, while fuel stocks aren't fully depleted they are low enough to push energy prices high enough that companies such as French glassware maker Duralex is scheduled to close its manufacturing plant in Orleans until April, when a lower-cost fuel contract comes into effect. In other words, it's not clear to me that the rolling one-year window we apply to economic metrics is going to be enough to help smooth out the effects of the past year.

Still, on a relative basis, Europe is having a strong finish to 2022. The only question is if these recent higher highs are a sign of better times ahead or just another bear market rally. I'm not going to pretend I have an answer here, but I would at least advise putting some European exposure on your watchlist.

Get an email alert each time I write an article for Real Money. Click the "+Follow" next to my byline to this article.
TAGS: ETFs | Investing | Europe | Real Money