It's often been said that one of the benefits of smoking cannabis as opposed to drinking alcohol is that you'll never wake up with a hangover. As you can tell from the below graph, investing in cannabis has been a whole other story since the sector's euphoric high in early 2021.

We have seen some brief rallies late in 2021 and a couple of points in 2022, mostly on speculation on the advancement of the SAFE Banking Act, but essentially, the sector has gone from a triple in first quarter 2021 to getting cut in half (or worse for some) as of Wednesday. 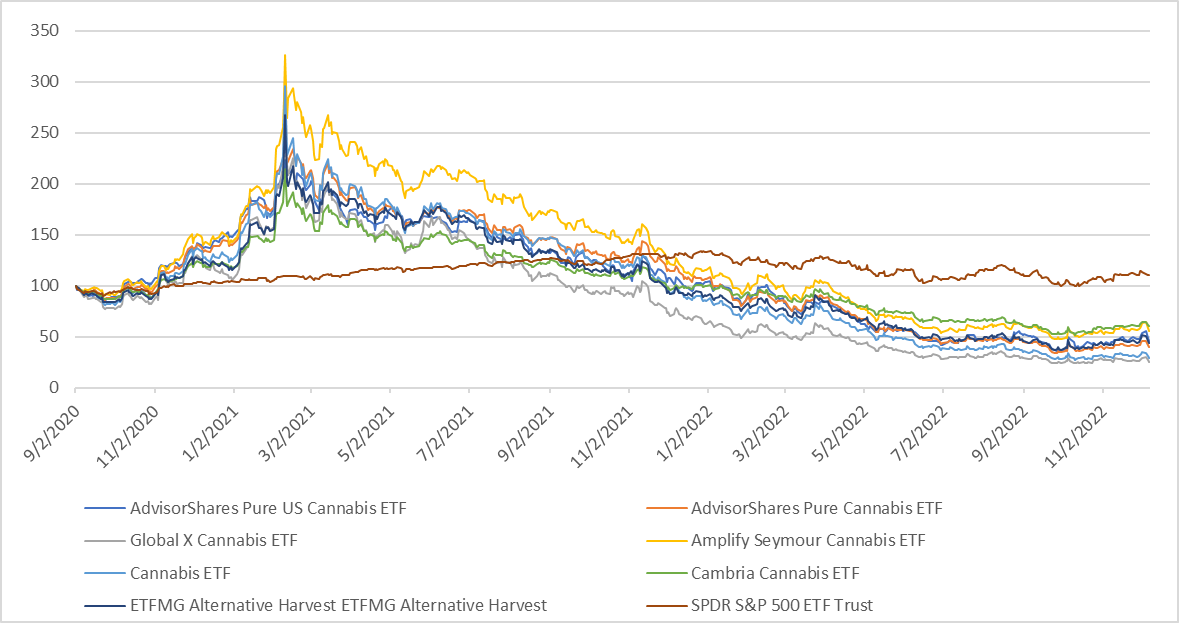 What caught my eye about this sector is that so far, through the current quarter, cannabis funds have been, for the most part, seeing some steady growth as you can see in the table below. I figured I'd take a look at some of these funds and see what's driving returns and try and figure out if the sector has finally put in a base or if this is another head fake.

Let's look at the AdvisorShares Pure US Cannabis fund (MSOS) . Year to date, MSOS has fared fairly well considering some of the other funds' returns but what caught my eye was its much stronger quarter-to-date returns to Dec. 7.

MSOS was the first cannabis fund to provide exposure to companies that are directly involved with cannabis cultivation, preparation, and sales through the use of swaps. Because of this, and its focus on the North American cannabis market, it is widely regarded as the standard bearer for exchange-traded fund-based cannabis exposure. The pure-play nature of the fund, coupled with its concentrated position in Green Thumb Industries (GTBIF)  (22.72%), Curaleaf Holdings (CURLF)  (18.12%), and Trulieve Cannabis (TCNNF)  (17.21%) helped the fund achieve its 25.48% quarter-to-date return to Dec. 7. These three names were the top 3 contributors to return and by my calculations accounted for roughly 66% of fund return over the period. It wasn't a pretty time for all of MSOS holdings as Power REIT (PW) , TPCO Holding Corp (GRAMF) , and Goodness Growth Holdings (GDNSF)  all fell just over 60% quarter to date. Power REIT just recently cleared a hurdle with Marengo County, MI officials that open up the way for the shift of a former pepper growing facility to a cannabis growing facility which assumedly will benefit the company going forward. GRAMF was punished by investors as it exited the bulk wholesale extraction business at the end of the third quarter and GDNSF fell over suitor Verano Holdings scuttling the deal to acquire GDNSF.

In looking at some of the other funds, while a few have some of the same type of exposures as MSOS, they are not as focused or as concentrated. For example, the Cannabis ETF (THCX) shares only three names in common with MSOS. MJ has a 25% allocation to its MSOS clone ETFMG US Alternative Harvest ETF  (MJUS) , but then also has positions in names like Scott Miracle Grow (SMG) , Philip Morris (PM) , and Altria Group (MO) , which in my opinion simply don't provide enough exposure to the cannabis space.

From looking at the graph, what I like about it is that these latest gains haven't come in the form of a sharp spike due to a reaction to some headline. There does seem to be a base of sorts that has been created. Now, it is true that MSOS as well as some of its portfolio holdings spiked for a day on speculation about the SAFE Banking Act being included in the National Defense Authorization Act, but even though it gave those gain back almost immediately, the quarter to date returns in the table above are what they are, meaning even though hopes were dashed once again the bottom did not fall out of the market on these names. Further, the sponsor of the bill, Rep. Ed Perlmutter (D-CO) has contingent plans to attach the bill to upcoming appropriations legislation, and even if that fails, the hope is that he and the Democrats can muster the 60 votes needed to pass the bill as a standalone piece of legislation.

Cannabis retail markets have proven to be resilient and a powerful source of tax revenue for those states that have created a suitable framework to support the industry. My take is that ultimately, love of greenbacks will win out over fear of the green sometimes referred to as "the devil's lettuce." Further, the SAFE Banking Act will make its way into law during this administration and significantly boost the entire sector in both the short- and long-term.

Get an email alert each time I write an article for Real Money. Click the "+Follow" next to my byline to this article.
TAGS: ETFs | Investing | Stocks | Cannabis