Investing in emerging markets has been on the radar of investors for at least a couple generations. Of all the countries that fall into this category, China is one market that investors have been clamoring to gain exposure to ever since the country started to pivot toward a capitalistic economic model.

Since China began to accelerate opening its markets in the 1980s there have been a number of opportunities for investors to experience outsize returns. However, as the following quote from the Cato Institute puts it, "China has developed a robust market for goods, but it lacks a free market for ideas."

Over the past few years the focus on China has shifted from the potential investing opportunity to the constraints put on Chinese companies and their founders, such as Alibaba Group Holding (BABA) and its founder Jack Ma. There also have been any number of human rights issues, not to mention the ongoing struggle of companies that try to retain control of their intellectual property. Still, the idea of investing in companies selling into one of the world's largest populations was too big of an opportunity for some to ignore.

This past weekend China's president, Xi Jinping, took steps not just to reaffirm his position as the country's leader but also in doing so marking a definitive change in tone as "common prosperity" and increasing crackdowns on certain technology companies are beginning to drive the investment narrative. Indeed, in the first trading session after the 20th National Congress in Beijing, Hong Kong's Hang Seng index closed down more than 6%, putting it at levels not seen since 2009, and it traded intraday at levels not seen since 1997. All of this is to say that while there are investors who have been avoiding China for human rights and other issues, there soon may be investors who will look to avoid China for fundamental reasons as well. Here are some funds to play that trade.

While there have been Asia ex-Japan investments for decades, it was only in 2015 that we saw the first emerging markets ex-China ETF launch in the U.S. market, the Columbia EM Core ex-China ETF (XCEM) . iShares followed soon thereafter, launching the iShares MSCI Emerging Markets ex China ETF (EMXC) . To be clear, both funds' rationale for excluding China has to do entirely with relieving investors of the relative overweight position China has among EM countries. The MSCI Emerging Markets Index has a 31.35% allocation to China as of Sept. 30, 2022, with both foreign (H-, P- and N-shares including Red Chips) and locally listed (A-, B- shares) equities.

As you can see from both the table and chart below, both the XCEM and EMXC track each other fairly well, but there is another fund I've added to the analysis, the Freedom 100 Emerging Markets ETF (FRDM) . This fund is one I have written about before, and as you can see, it has managed to pick up 124 to 177 basis points depending on which fund you compare it to in the year-to-date period ended Oct. 21, 2022. The graph shows linked returns from the inception of FRDM on May 23, 2019. 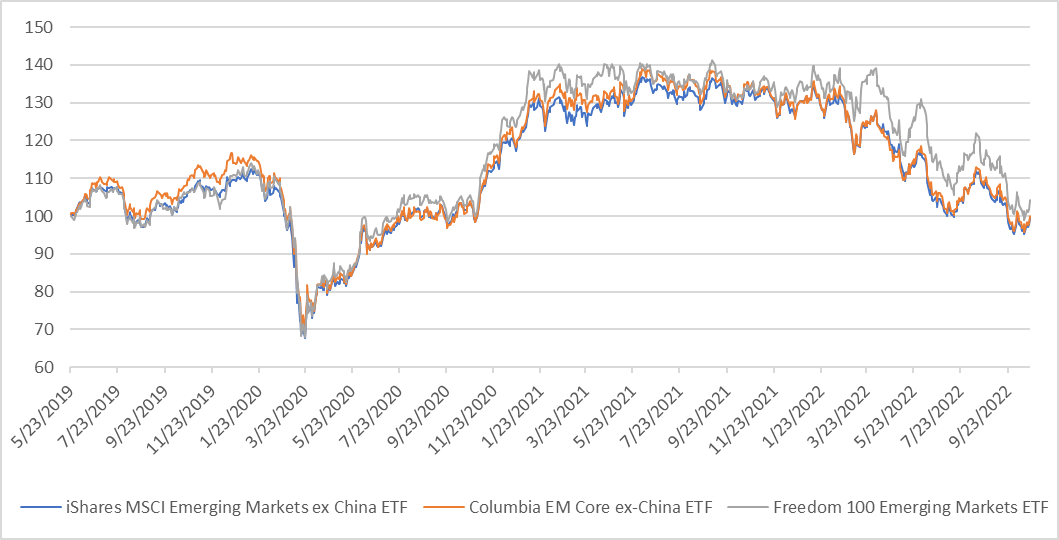 While XCEM and EMXC were developed as an overweight avoidance strategy, FRDM's approach is based on the idea that countries with higher levels of social, political and economic freedom over time will develop robust economies and by extension better investing opportunities. Consequently, the fund not only currently avoids China, but based on freedom scoring avoids Russia, Saudi Arabia, Egypt, Turkey, Qatar and the United Arab Emirates.

If you are an investor who is considering reducing or even eliminating your China exposure because of the recent intensification of China's shifting position on capitalism, then perhaps XCEM or EMXC might be worth a look. However, if this repositioning plays heavily into the decision to change your investment thesis on China, then I would think allocating EM exposure to FRDM would be a simple decision to make, if only for its avoidance of not just China but also other countries that restrict freedoms.

They come with varying degrees of risk, though one in particular seems more vulnerable.