As lovely as it is to have the November interest rate decision behind us, I'm not sure it matters. Sure, it's possible that we saw our final 75 basis point rate hike of this cycle. But let's face it. All it will take is another overheated Consumer Price Index (CPI) report to reignite fears of higher rates for longer to send stocks down a few percent. If it weren't for the midterm elections on Tuesday, I'd tell you to enjoy some peace and quiet for a few days. But I'm afraid the breakneck volatility will be with us for a while longer.

Because the October CPI report isn't released until Thursday, let's set that aside for today and focus on the following headline report -- the midterm elections.

Moving on to stocks, while the iShares 20+ Year Treasury Bond ETF (TLT) has stalled out beneath its 21-day exponential moving average (EMA), my investment in TLT is based on my expectation of a recession in 2023. Ideally, I'll have a chance to build my position closer to $88.50-$90. But if price stabilizes in the mid-$90s and begins to push above the 21-day EMA, I'll likely start adding to my position.

I can't think of a stock or industry that has been a more significant disappointment than cannabis. Still, the AdvisorShares Pure US Cannabis ETF (MSOS) chart shows signs of a bottom and I'm back to monitoring the price action for an upside break. 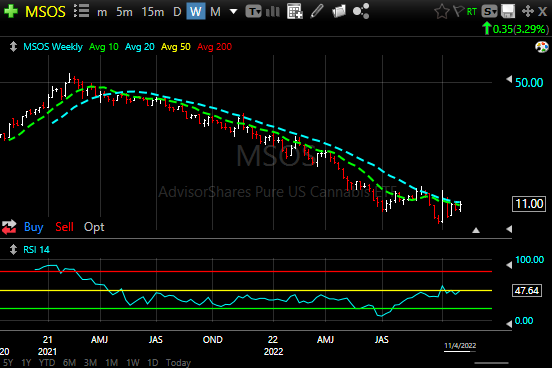 Sellers have prevented a break above the weekly 20-period simple moving average (SMA) since the downtrend began in early 2021. While the bulls don't have control of the price action yet, a break above $12 would attract some attention. A close back under $10 sends MSOS to the trash heap, but anything above $12 (and $14 on a higher timeframe basis) should bring in more aggressive buyers.