Get ready to see statistics flying left and right about how oversold health care is. After all, how often is it you see a major market group like this get slaughtered like health care has these last few days?

This decline is not about Bernie Sanders talking about Medicare for All. I know that's the narrative, but Health Care Select Sector SPDR (XLV)  -- an exchange-traded fund to be long the health care sector -- has lagged for months. The S&P 500 is kissing the highs and this ETF is - well was - off the highs, and even at that hadn't made a higher high since February. Oh sure, that is the reason given for the tumble, but this was in the works well before this week. I call this a Realization Day. That's the day everyone finally realizes the reason for the selling. Realization Days often lead to short term bounces.

The group was all anyone wanted to own in the fourth quarter last year, and so it was over-loved and over-owned, which is often a recipe for a big whack. That action for the last three months has a short term measured target around $85 -- the neighborhood it's in now. I'd love to see one more day of selling, just to shake out any knife catchers. If a rally does ensue, $88-$89 will be serious resistance that it won't likely get through.

As for the market overall, considering the S&P 500 was down 6.6 points and the Russell 2000 was down nearly 1%, breadth wasn't terrible at -550. The problem is that breadth hasn't been good enough to keep the McClellan Summation Index rising. It now needs a net differential of +900 advancers minus decliners on the New York Stock Exchange to get it to turn back up.

The real issue is the number of stocks making new lows. On Monday, we looked at the 10-day moving average of this indicator for NYSE. It is rising.

Nasdaq too has seen the indicator turn up, and quite frankly it has done so from a higher level than it did two months ago. 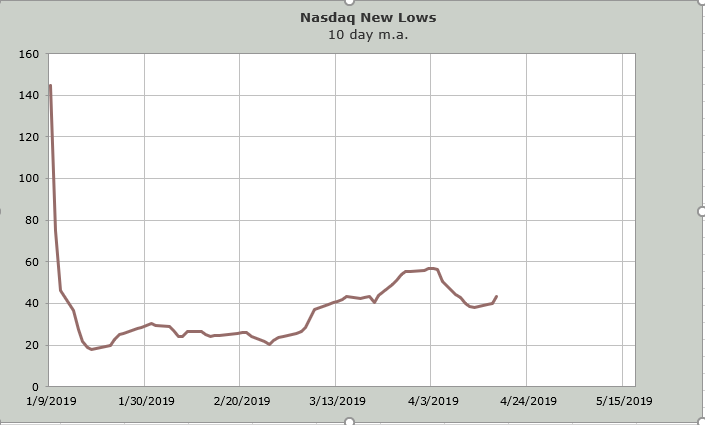 The raw data for Nasdaq's new lows show that it is now the same number it was in late March, when Nasdaq was 400 points higher. I always ask myself: If Nasdaq falls 400 points from here, will the new lows contract? That's doubtful.

Finally, the Volatility Index bounced from the support level it has bounced from in the past year. And just as there were so many bets on a lower VIX (from that extremely high put/call ratio for the VIX yesterday) it seems everyone saw the reversal, because Wednesday these VIX options players loaded up on calls. The VIX put/call ratio sunk to 16%. I suspect some of that was the rout in health care and some of that might be the upcoming long weekend, but either way that's quite a change from these options players in sentiment in 24 hours.

Wishing everyone a Happy Passover and Happy Easter holiday!

Get an email alert each time I write an article for Real Money. Click the "+Follow" next to my byline to this article.
TAGS: ETFs | Investing | Technical Analysis | Healthcare |

This Is a Very Tough Market for Stock Picking

The higher this market goes the more that many market players wonder how much longer it can last.

Baffled by the Market? Blame the Money Managers

Money management tends to drive action like we have now that appears irrational.

'Power' Your Portfolio With These 'Shares'

At Index Highs, This Part of the Market Looks Surprisingly Soft

The 12-month highs to lows is unimpressive as small caps are still lagging and big cap stocks like Microsoft, Amazon and Apple lead.