Stocks ended the week strong, and we can thank a significant portion of those gains to Monday's bullish gap and last Friday's report from The Wall Street Journal's Nick Timiraos that Federal Reserve officials are likely to spend some time during their Nov. 1 and 2 meeting debating whether it's time to pivot toward smaller rate increases.

The market is pricing in a 92% probability of a 75-basis-point hike on Nov. 2, so barring something crazy occurring between now and then, let's assume that a three-quarter point hike is in the bag.

But what about December?

Ten days ago, on Oct. 14, the market was pricing in a 69.8% probability of a three-quarter point rate hike at the Fed's Dec. 14 meeting. But that probability has slipped to about a 44% chance. Regardless of what happens on Nov. 2, the market expects rates to end the year between 4.5% and 4.75%. And remember, Timiraos' article isn't talking about a Fed pivot toward rate cuts, but rather merely a reduction in its aggressiveness toward tightening.

Speaking of interest rates, did you see the volume on the iShares 20+ Year Treasury Bond ETF (TLT) on Friday? I can't remember when folks on Twitter were so fixated on bonds. But here's the thing: While TLT's volume was more than double its 30-day average on Friday, we've seen that occur four other times this year, and selling resumed in relatively short order each time.

However, traders looking for a bounce in TLT have something going for them aside from a monstrous volume spike after a massive decline, and that's a 14-period Relative Strength Index (RSI) reading in single digits. 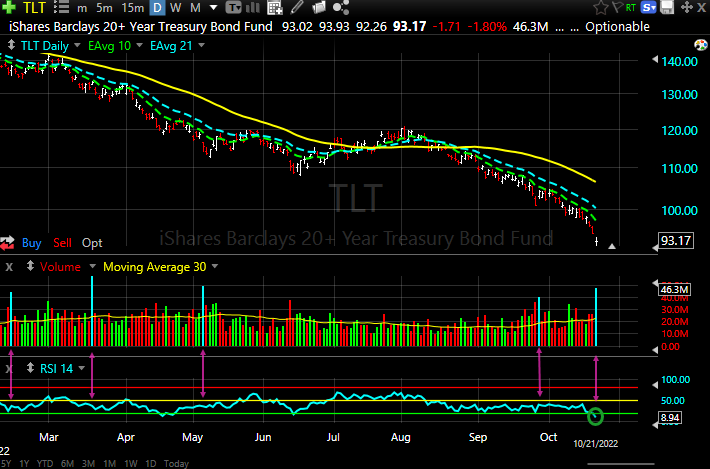 This year, prior volume spikes on TLT haven't coincided with single-digit oversold RSI readings. Now, is that enough to trigger a bounce in the ETF? I'm not sure. But I've had a line drawn in at $88.50 (an approximate bottom from 2008, 2009, 2010 and 2011) for ages. And while I can't say that I ever expected to see that price via a near collapse in the TLT, the closer price gets to $90, the more intrigued I regard a longer-term position. Suffice it to say that I initiated a position in TLT on Friday, and I plan to add to the position as we test levels closer to $90.

Get an email alert each time I write an article for Real Money. Click the "+Follow" next to my byline to this article.
TAGS: ETFs | Federal Reserve | Interest Rates | Investing | Trading | Treasury Bonds | Real Money