Sometimes the worst thing a trader can do is to pay too much attention to the news.

Don't get me wrong, I enjoy reading about the economy, politics and business as much as the next stock junkie. But my job (and yours) as a trader is to react to price action and to measure every situation's potential risk and reward. If I'm constantly trying to interpret whatever economic report Rick Santelli and Steve Liesman are arguing about on CNBC, I'm probably not paying enough attention to the tape and charts.

For example, when I first took a position in the iShares 20+ Year Treasury Bond ETF (TLT) , most traders thought it was a terrible idea. Aside from an aggressive seller walloping every bid, all you had to do was listen to the folks on CNBC or other financial media outlets to realize that TLT was in a death spiral. 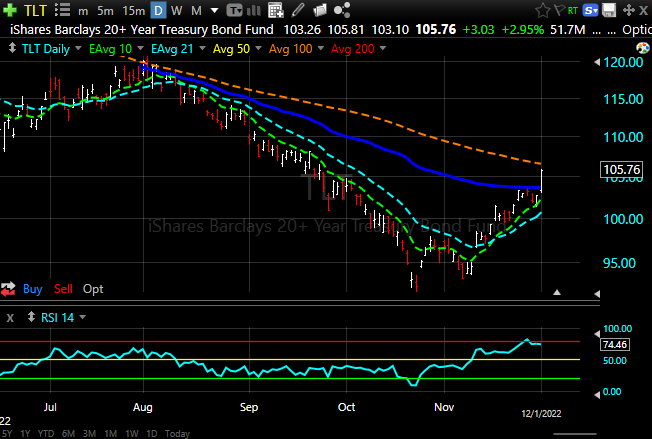 But the technicals said something else entirely. As I've mentioned in the past, the fact that the TLT's 14-period Relative Strength Index (RSI) was in single digits after a prolonged decline and the ETF's price was beginning to drop like a rock made me believe we were looking at the tail end of a washout. Fast forward to this week, and many folks now believe TLT is an OK thing to own.

While I still hold my TLT position, I'm a trader. And as a trader, I took the opportunity on Thursday afternoon to begin hedging my position with short calls.

My calls will expire worthlessly in a perfect world and my TLT shares will remain in my possession. But given the ETF's proximity to its 100-day simple moving average and the magnitude of the rally over the past three weeks, a bit of hedging or selling seems reasonable.

As a side note, Thursday's trade volume on TLT was the fourth highest over the past six years. I'm not sure we need to make too big a fuss over the volume surge, but considering where I believe the ETF is in its recovery rally, it may be an indication that some shorts were squeezed or hesitant buyers gave in to the fear of missing out.

Get an email alert each time I write an article for Real Money. Click the "+Follow" next to my byline to this article.
TAGS: ETFs | Investing | Options | Technical Analysis | Trading | Treasury Bonds | Real Money