Before Fed Chairman Jerome Powell kicked over the punch bowl last Friday, I mentioned that if stocks reversed lower following his comments many of Thursday's cheerleaders would go AWOL, and that's precisely what happened. Despite most traders, money managers and analysts I speak with admitting they're concerned about the long-term implications of rising rates and inflation, most of them told me after Thursday's rally that stocks were headed higher regardless of what Chairman Powell said. Suffice it to say that the fear of missing out (FOMO) is a powerful driver more often than not -- even professionals give in to it.

While the Nasdaq was destroyed by more than 4% on Friday, the ARK Innovation ETF (ARKK) was hit even harder, losing nearly 6.5%. As you can see, with ARKK back under its 50-day simple moving average (SMA) and its volume-weighted average price (VWAP) anchored to the mid-June swing low, it's nearly impossible to want to be long anything related to this ETF. 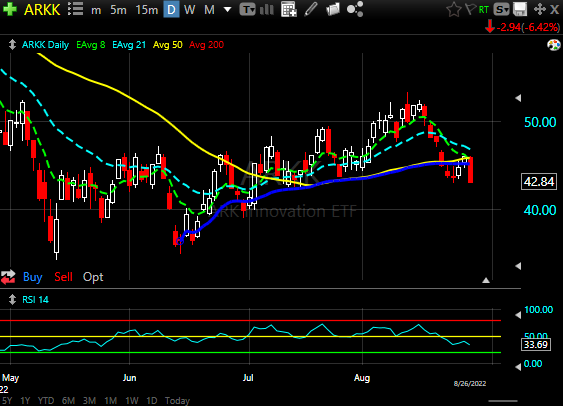 It is possible buyers try and bid against the mid-July support, but with the Relative Strength Index (RSI) falling away from the 50 center line, this isn't an ETF I want to be long. To change my mind, I would need to see the RSI back above 50 and price above the anchored VWAP and all short and intermediate timeframe moving averages.

The chart of the Invesco QQQ Trust (QQQ) doesn't look much better than ARKK. However, the bulls still have a little hope, with trend line support, the 50-day SMA and the anchored VWAP just beneath the intermediate timeframe SMA. But again, I wouldn't bet too aggressively on that hope. 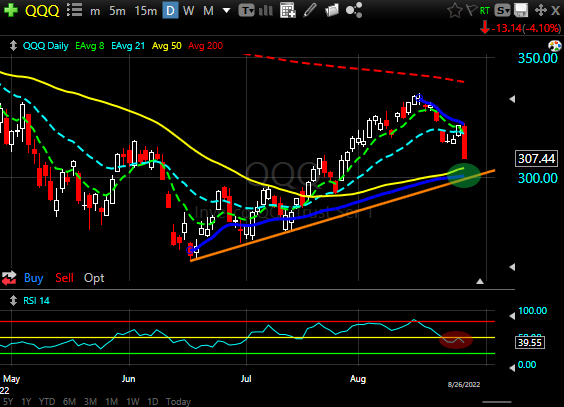 From a swing-trading standpoint, I'm not in a hurry to do much. If we see a strong reversal from near $300, where the moving averages and up trend line intersect, that might change my mind. But based on Friday's decline, this feels like an environment for scalping rather than swing trading.

Speaking of day trading, if you're a long-biased scalper like me, you'll want to keep a close eye on the regular session's VWAP.As long as price is trapped beneath the session's VWAP, inactivity will be your friend.

Get an email alert each time I write an article for Real Money. Click the "+Follow" next to my byline to this article.
TAGS: ETFs | Federal Reserve | Index Funds | Interest Rates | Investing | Technical Analysis | Trading | Real Money

The Big Question for Me Is Positioning, Specifically in Equities

It's hard to buy the "everyone is bearish" argument, but there are reasons to believe there could be selling pressure as the end of the year approaches.

Don't Expect This Rally to Last, So Put in Stops Now to Protect Your Profits

It won't be surprising to see folks focus on earnings estimates being too high once late December and early January roll around.

This REIT-focused offering from Blackrock/iShares is just a week old.