Soy, wheat and corn. These crops feed much of the world, and now these agricultural commodities have been rising in cost amid a summer of drought and high heat. So, let's see whether now is a good time to invest in the Teucrium exchange-traded funds that cover these critical food sources.

But first, a flashback. When Russia began invading Ukraine, I wrote about the Teucrium Wheat (WEAT) exchange-traded fund, as among the casualties of the war were immediate global wheat stores and the upcoming crop cycle and fall deliveries.

Around that time, Chris Versace over at AAP, had a great interview with Teucrium CEO Sal Gilbertie covering the impact of the invasion. As the war has progressed, we have seen wheat prices come back down as certain trade routes were opened and grain deliveries resumed starting in July. While the threat to global food supplies from the invasion and subsequent war has diminished, there have been increasing stories concerning drought and hot weather that have hit farmers. Take a look at chart below of Teucrium funds for  various commodities. 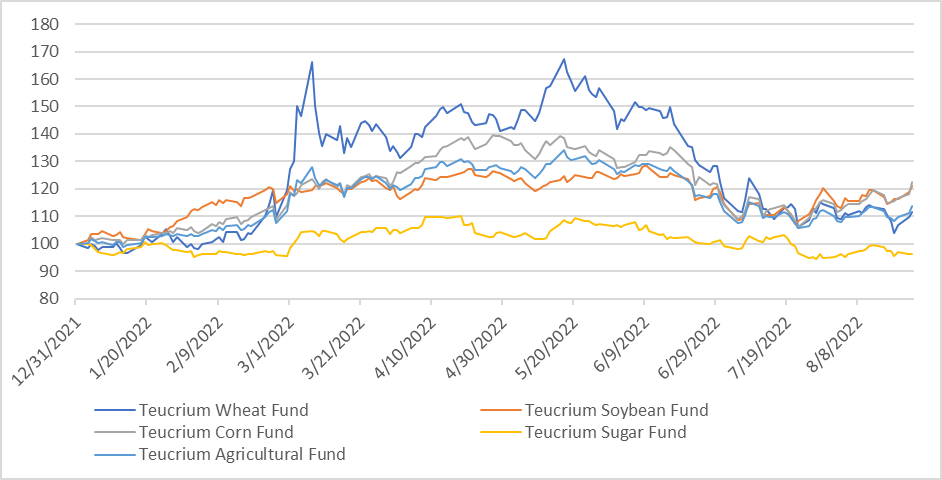 Due to the lack of history on TILL, I have not included it in the correlation or return analysis, but since its launch on May 17, the fund has returned -13.71% through Aug. 23 as compared to TAGS' -15.24% results, which tells me that the portfolio managers are adding some value here. Expense ratios for these products are listed in the table below but TILL carries a 149-basis point (bps) fee, meaning a shareholder with $1,000 invested for a calendar year would pay $14.90 in fees over that period. It should be noted that the 13-basis point fee for TAGS does not include any acquired funds fees, which given the equal weight target for all holdings would sum to an additional 114.5 bps of fees for a total of 127.5 bps.

The fund lineup is relatively small but given their focus and total assets under management of just under $700 million (including TILL and adjusted for TAGS being a fund-of-funds product) the size of this issuer and its funds shouldn't be a problem for anyone.

The below table shows the correlation coefficients of, WEAT, SOYB, CORN, CANE, TAGS, and the SPDR S&P 500 ETF Trust (SPY). Notes here include just how uncorrelated to equities soft commodities can be, and, while still relatively uncorrelated, how closely corn tracks with both wheat and soybeans.

Notice how out of sync CANE seems to be with the rest of these products in 2022. My guess is that the continued onslaught of sugar as an unhealthy commodity coupled with the geography of production has largely kept it sheltered from the volatility surrounding grains.

Diversification is healthy for investors and agriculture commodities are important for a well-fed society. For these reasons, I don't see why investors wouldn't have regular exposure to these products. Given current droughts and continued uncertainty around the Ukraine invasion and current crop conditions as outlined here, we could see a near-term supply squeeze on the horizon and with that, an opportunity to trade around these products over the next few months.

Get an email alert each time I write an article for Real Money. Click the "+Follow" next to my byline to this article.
TAGS: Commodities | ETFs | Investing | Agriculture