During Wednesday's Mad Money program, Jim Cramer said he likes Estee Lauder Cos. (EL) , as everyone will still want to be looking their best when they're finally allowed to go back outside. (I believe that all the appointments at the beauty salons and barber shops will be booked up quickly.) Let's check out the charts of EL.

In this daily bar chart of EL, below, we can see a bullish set up with the price action and the indicators. Prices made an $80 decline from their highs in January and have bounced from mid-March with an early April pullback or retest.
We have a low and a higher low on the chart now.
Prices need to rally above the late March peak to create the simple definition of an uptrend - higher lows and higher highs. The 50-day moving average line and the slower-to-react 200-day moving average line have negative slopes.
The daily On-Balance-Volume (OBV) line made a modest decline from January into March but since the middle of March the line has firmed and is very close to making a new high for the move up.
The trend-following Moving Average Convergence Divergence (MACD) oscillator crossed to the upside last month for a cover shorts buy signal.

In this weekly Japanese candlestick chart of EL, below, we can see some positive clues. Prices declined down to a major support zone (former resistance zone) from 2018 in the $150-$120 area. Notice the lower shadows below $150 indicating that traders rejected those levels.
The weekly OBV line shows only a slight decline the past two months which suggests only minor selling or liquidation.
The weekly MACD oscillator is below the zero line in an outright sell position but the oscillator has begun to narrow towards a reversal.

In this Point and Figure chart of EL, below, we can see a projected upside price target of around $210. 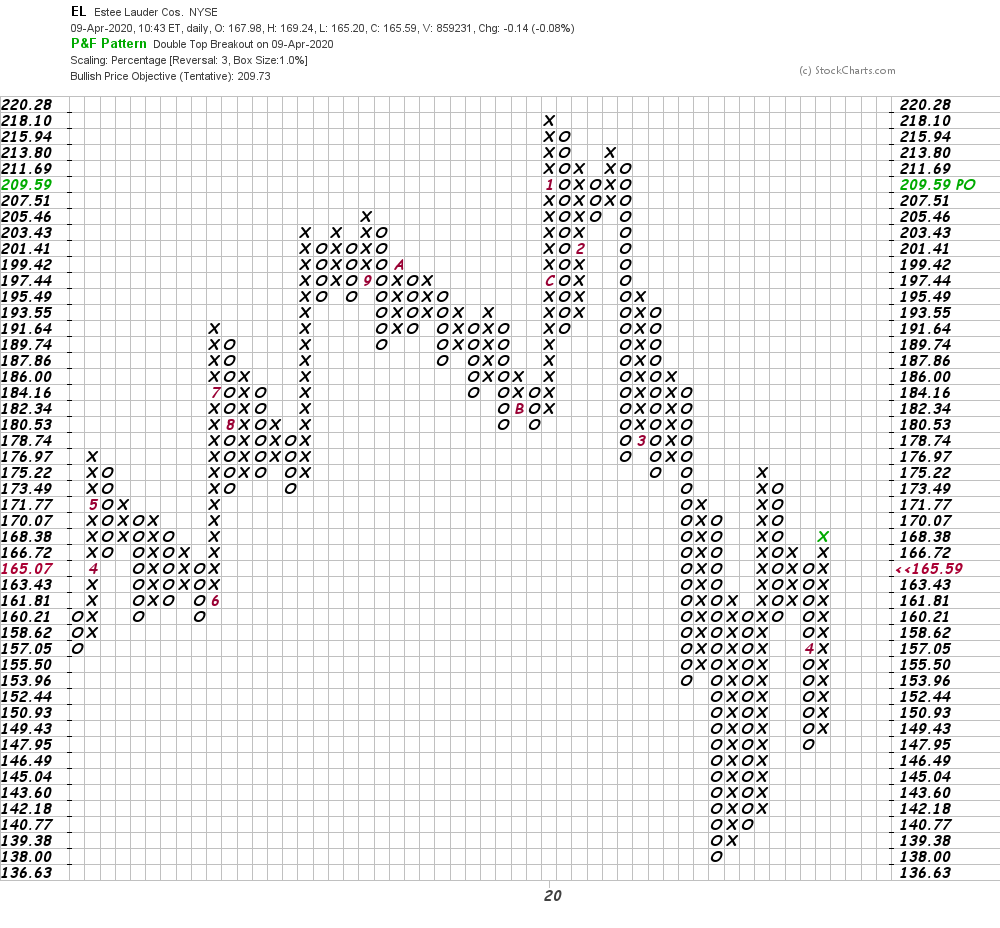 Bottom line strategy: Traders could probe the long side of EL on any one to two day dip or minor pullback risking a close below $150. The $210 area is our initial price objective.
Get an email alert each time I write an article for Real Money. Click the "+Follow" next to my byline to this article.
TAGS: Investing | Stocks | Technical Analysis | Trading | Personal Products | Mad Money