Estee Lauder (EL) broke out of a base formation in early February and it has hardly looked back the past four months as prices have climbed to $180 from below $125. Further price gains appear likely for this world-wide cosmetic firm. It was mentioned on Monday night's "Mad Money" as one of several brand names heading higher.

But let's check out the charts and indicators of EL to see if the gains are more than skin deep.

In this daily bar chart of EL, below, we can see that prices are now above the rising 50-day moving average line. EL is also above the bullish 200-day average line. In early March you can see that the 50-day line crossed above the slower-to-react 200-day line for what is commonly called a golden cross. Like moving average signals in general, the golden cross can be rewarding to investors in long-trending markets. The daily On-Balance-Volume (OBV) line shows some weakness from late April, which points to more aggressive selling. The weakness in the OBV line diverges from the price action, which has been making new highs. In the lower panel is the Moving Average Convergence Divergence (MACD) oscillator, which was bearish from late February until early June. In early June the oscillator turned upward for a fresh go-long signal.

In this weekly bar chart of EL, below, we can see a much stronger picture than the daily chart. Here prices are above the rising 40-week moving average line. The weekly OBV line is firm and not diverging from the price action. The MACD oscillator just turned up to a new buy signal.

In this Point and Figure chart of EL, below, we can see a bullish pattern -- a double-top breakout. A trade at $180.53 will be a new high and a breakout that opens the way to a possible price target of $213. 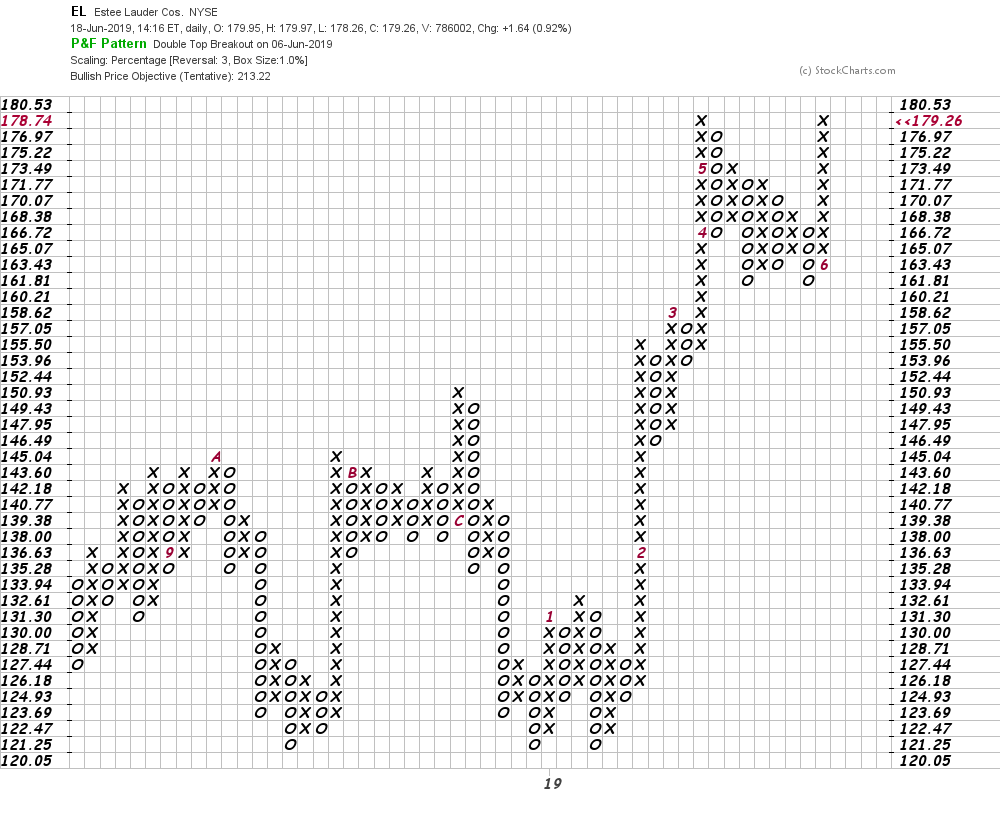 Bottom line strategy: EL could trade sideways a bit longer before pushing up to new highs. $200 and the $215 area are the next upside price targets. Long should risk a close below $169.

Get an email alert each time I write an article for Real Money. Click the "+Follow" next to my byline to this article.
TAGS: Investing | Technical Analysis | Mad Money | Consumer Discretionary

Time for Caution in the Markets

For now, only the bold will take bigger risks and probably regret it in the end.

The Large Bifurcation of Views on Inflation

Rent increases are going to widen the discrepancy between the 'haves' and 'have nots' in our society.