The Thanksgiving holiday and crude oil prices have not been friendly to one another over the years. Some of the most challenging energy markets have occurred as the majority of Americans were sitting down at a table with family to enjoy a turkey dinner. The general public isn't aware of the fact that commodity futures markets rarely close, not even for Thanksgiving.

The futures markets, including commodities such as crude oil, natural gas, gold, and others, generally trade in an overnight session on the Wednesday evening prior to the fourth Thursday in November. The futures continue to trade on Thanksgiving morning as they normally would and close a moderately abbreviated session at noon Central Time. In other words, for all intents and purposes, the commodity markets are open on Turkey Day.

In some ways, this is nice because it gives traders the ability to react to global news on a holiday. However, in many scenarios it is a curse; low trading volumes often lead to exaggerated price moves and, in many cases, unmanageable volatility and risk. Even worse, once you take volatility out of the jar it is difficult to put it back inside.

I'll never forget the Thanksgiving Day in 2014. I boarded a plane to Chicago on an early morning flight (before dawn) out of Las Vegas because the airfare was dramatically cheaper to fly on Thanksgiving than it was to fly on the Wednesday before. It seemed like a savvy move because I would still arrive in the Windy City early enough to enjoy the holiday with friends and family. Yet, I had completely underestimated the ability for commodity market volatility on what should have been a quiet and relaxing day of thanks.

Several of our brokerage clients, and I, had option positions in which there was downside risk exposure. The trades were constructed in a manner that allowed for some price weakness without causing an issue, but a high volatility dramatic move would leave the positions vulnerable. Prior to boarding the plane, I noticed crude oil prices were down $2.00 to $3.00. This was concerning, but not out of the ordinary and completely manageable. However, by the time the plane landed the market was closed and, if I recall correctly, down roughly $8.00 per barrel (in a single abbreviated trading session). Needless to say, it ruined my Thanksgiving.

The 2018 Turkey Day volatility felt dramatic, but it paled in comparison to 2014. Nevertheless, trading in the energy market during this time of year is substantially riskier than doing so during more normal and liquid conditions. Any commodity trades spanning from mid-November through early January should be employed on a minimal scale and with a meaningful hedge; I've learned this hard lesson more than I care to admit.

Having said that, any decision you make that might, or might not, be influenced by any of the things I have to say should stay within the theme of conservation of capital, not swinging for the fence.

OPEC is grabbing at the proverbial straws in an attempt to regain control of the global oil markets. It is clear by now to most that U.S. shale has dramatically impaired the influence OPEC has on the market, but that doesn't stop crude oil speculators from reacting to OPEC headlines in the short-run. The upcoming December meeting on December 6 is expected to be accompanied by a production cut to the tune of 1 to 1.5 million barrels per day. The going assumption is that cratering prices leave OPEC with no choice but to try to stabilize pricing. Anticipating of such ahead of the meeting could support prices in the coming sessions and possibly into mid-December as the reality of the news is digested.

Technical oscillators on a weekly crude oil chart have finally dipped into oversold territory. The RSI and Slow Stochastics are both suggesting the selloff could be a little overdone. Further, there is a relatively high probability of a sharp bounce. Although the trendline near $51.00 has been temporarily breached on a few occasions, in our eyes it is holding. Remember, technical analysis is an art, not a science. Relying on and reacting to precise figures isn't practical. Aside from stop-loss running and the flushing out of the weak players the market is seeing buyers come in on dips, and that is how bounces start. 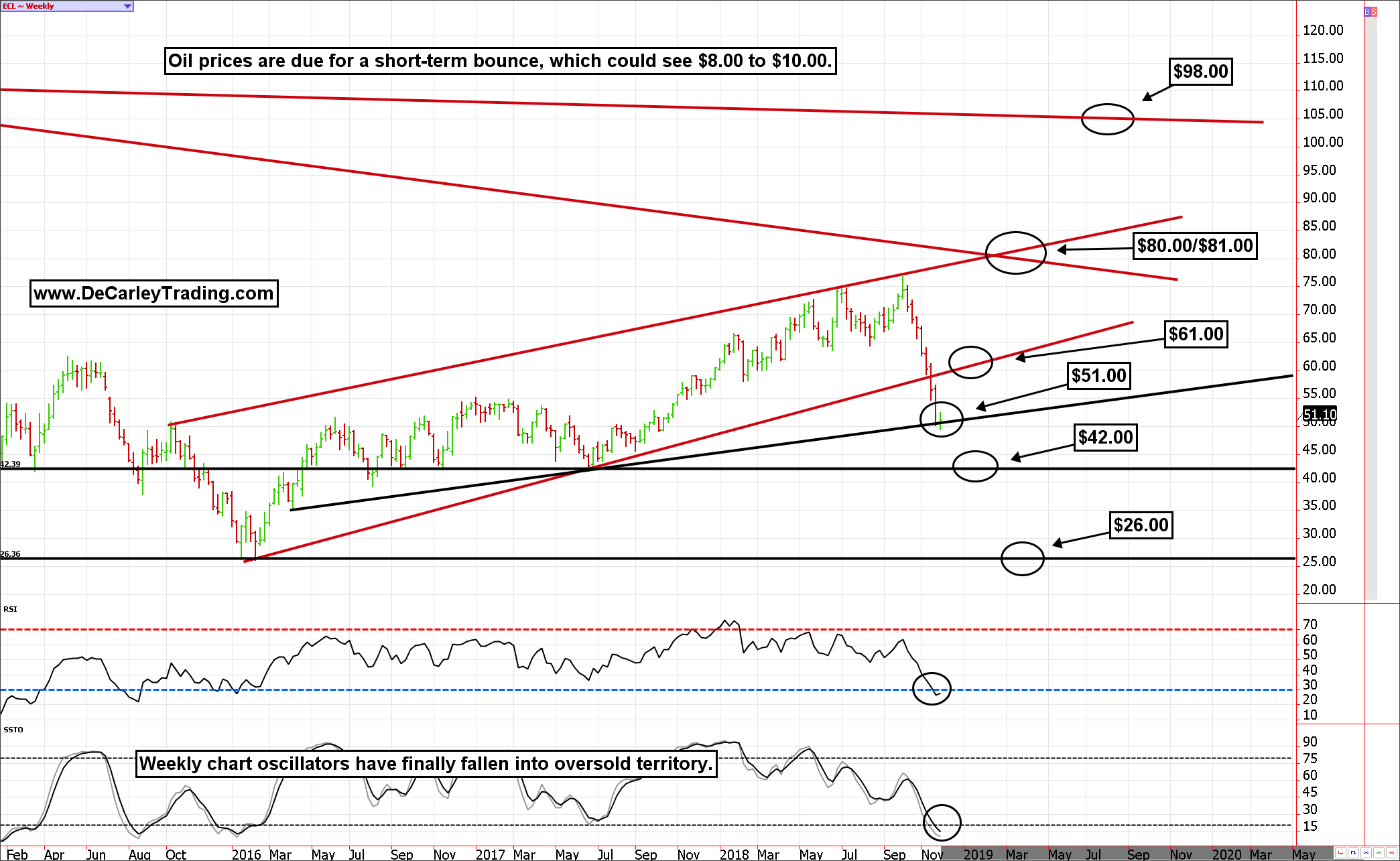 If this area of support continues to hold, as we suspect, a move toward $61.00 could be in the cards. $61.00 marks the area in which the previously broken uptrend line would then become resistance...and a likely target for a corrective rebound.

Keep in mind, seasonal tendencies remain overall bearish through January and part of February. Thus, the long-term bulls are not out of the woods on a possible test of $42.00. If a potential December bounce eventually fails to break above $61.00ish, another round of selling could commence.

This commentary originally appeared on Real Money Pro on Nov. 29. Click here to learn about this dynamic market information service for active traders.

Get an email alert each time I write an article for Real Money. Click the "+Follow" next to my byline to this article.
TAGS: Investing | Energy