During Monday night's Mad Money program on CNBC, Jim Cramer sat down with Rusty Braziel, president and CEO of RBN Energy for the latest read on the energy markets. Braziel said investors shouldn't fret the instability in Venezuela, as that country only produces a little over 500,000 barrels of oil a day for the U.S.

While the elimination of that oil may be bad news for the likes of Valero Energy (VLO) or Chevron (CVX) , which have refineries dedicated to the heavy oil Venezuela produces, overall, it pales in comparison for the one million barrels a day the Permian Basin was able to add to its production last year alone.

When asked about Saudi Arabia, Braziel noted that the Saudis only have one weapon at their disposal when it comes to oil prices and that's to reduce its production. But when they do that, he said, they lose market share, which makes that weapon very ineffective.

Turning to the topic of natural gas, Braziel said supply and demand are currently in balance, which means any hiccup has the potential to spike prices in either direction. This is due to increased natural gas exports, he said, along with an increase in renewable energy used by power plants, which need to supplement that supply when the sun isn't shining. We looked at CVX the other day, so let's look at VLO today.

In this daily bar chart of VLO, below, we can see that prices peaked in early June and declined to a low in late December. Prices have recovered the past four weeks and the indicators are looking stronger. VLO is above the bottoming 50-day moving average line.

The slower-to-react 200-day moving average line is still pointed down and intersects well above the market in the $103 area. The volume pattern is interesting, in my opinion. Notice the heavier volume from the middle of October? This heavier turnover as prices stabilized can mean that aggressive sellers met aggressive buyers. If aggressive sellers met weak buyers it is likely that prices would have weakened even further.

The daily On-Balance-Volume (OBV) line peaked with prices in early June and made a low with prices in late December. The recent rise in the OBV line points to more aggressive buying.

The trend-following Moving Average Convergence Divergence (MACD) oscillator is now above the zero line for an outright go long signal.

In this weekly bar chart of VLO, below, we can see the rally and decline for VLO over the past three years. The decline to around $70 in recent months looks like it stopped above an area of prior resistance back in 2017, which has reversed rolls to being an area of support.

VLO is below the declining 40-week moving average line and a rally to $100 is needed to retest the line from the underside.

The weekly OBV line has weakened since May but an uptick from December shows promise for a bullish reversal.

The weekly MACD oscillator has crossed to a cover shorts buy signal.

In this Point and Figure chart of VLO, below, we can see an upside price target or objective of $88.67. Not a bad start. 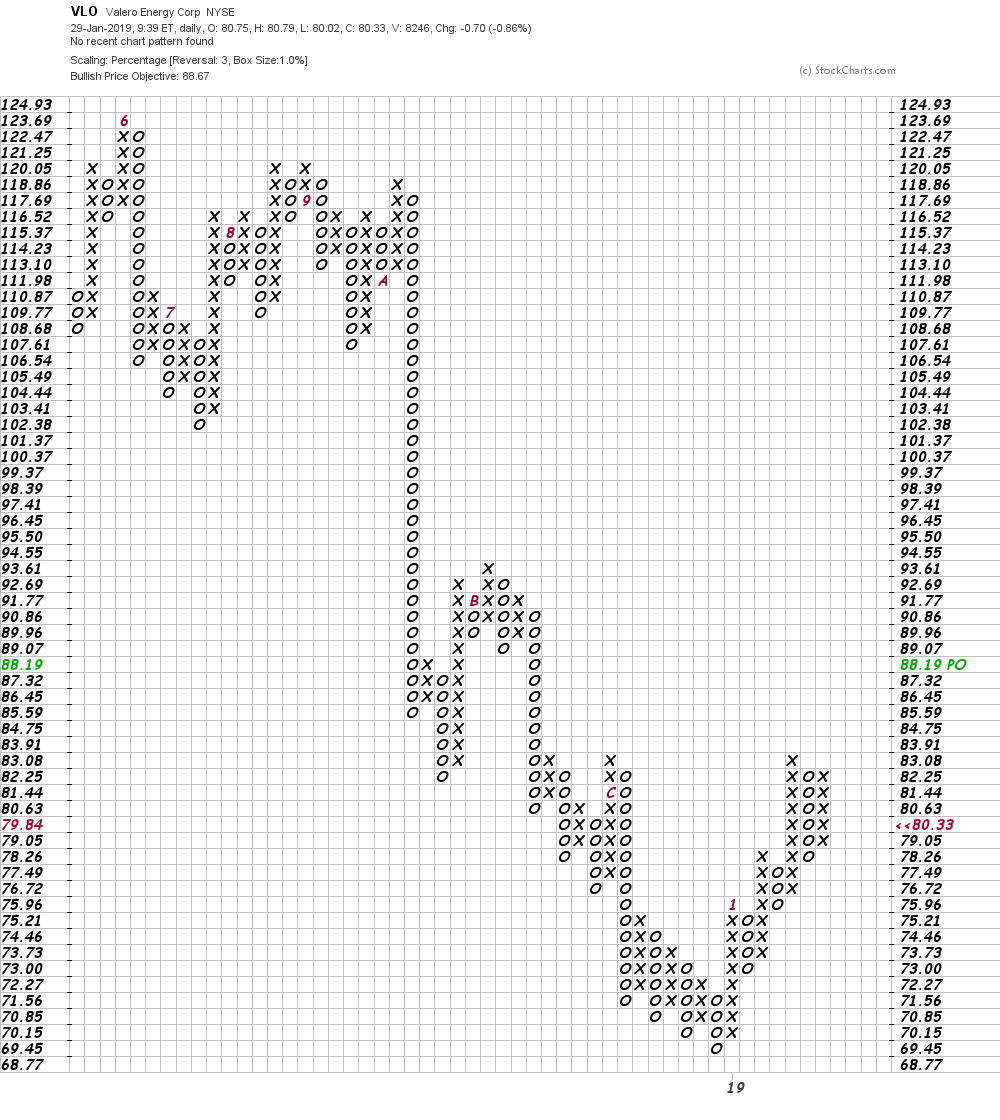 Bottom line strategy: The price of VLO could be buffeted by crude oil prices, day-to-day news and the direction of the dollar, but it looks like prices can improve further from their December low. Aggressive traders can approach VLO from the long side looking for gains to $88 and then the $100 area in the next few months. Risk a close below $73 for now.

Get an email alert each time I write an article for Real Money. Click the "+Follow" next to my byline to this article.
TAGS: Investing | Markets | Oil | Stocks | Technical Analysis | Trading | Energy