Once upon a time. Back in the 1970's. Queens, NY. There were stickball kids, and there were whiffle ball kids. Pretty much the same game. Primary difference is that in stickball, a batted ball travels much further. The bat is a broom handle, and the ball either a tennis ball or a "pinkie". Kids who lived not so near a playground, or on a more congested street played "Whiffle Ball". Why? The hollow plastic ball, and the hollow plastic bat allowed the game to played in a much smaller area. What these two urban versions of baseball had in common, was that there was no room to run bases, hits were "automatic." A ground ball through the defense for a single, or a fly past certain lines on the street for a double, triple, or home run. Hit the electrical box on top of the telephone pole? Automatic grand slam, regardless of whether or not there were any runners on the base paths. Oh, we were all Dave Kingman by the way. In Queens, he was the guy.

Equity markets have now played urban baseball for two days. Our ball has been hit rather far earlier on in these sessions, only to end up really traveling nowhere. There was finally a noticeable uptick in trading volume across the S&P 500. The caveat would be that the index gave up one point on the day, and the most heavily traded candles happened late in the day, which is normal, but would also be toward the day's lower prices. Trading volume edged higher for both equities listed at the NYSE and the Nasdaq, but just barely, and remained well below the levels of one week ago. In fact, as software (cloud) stocks underperformed, declining volume at the Nasdaq beat advancing volume. My opinion, not worthy of inscription upon stone, would be that there has been some profit taking this week, but that institutional money has not altered their stance broadly in quite some time. 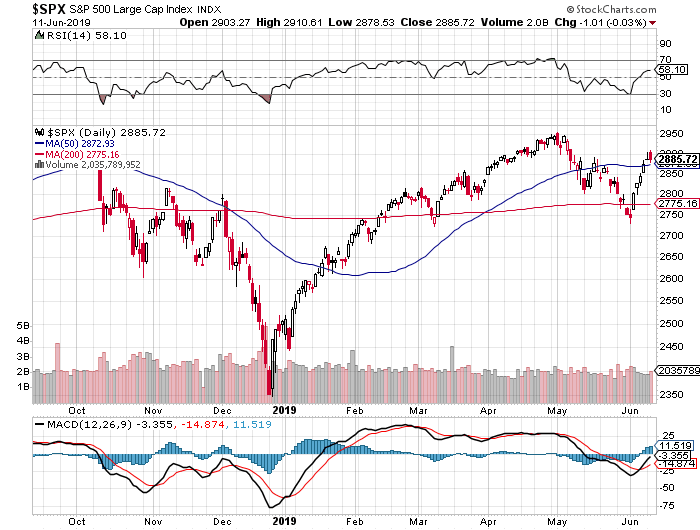 In fact, the slope of last week's ascent for the S&P 500 had clearly been unsustainable without either hitting a wall, or pausing to refresh. That slope does present as awfully similar to those two rallies seen last autumn prior to the Fed induced meltdown, do they not? There is a big difference this time around however. This time markets believe that there is a Fed put. The threat now comes from the arena of global trade, and an economy that maybe slowing regardless. Either way, I'm ready for an epic game of either stickball or whiffle ball. Your choice. Not kidding.

Reach For The Sky

The great train robbery? No, but certainly a "hold up" nonetheless. "We had a deal with China and unless they go back to that deal, I have no interest," so said President Trump. This comes just one day after the president threatened to slap a 25% tariff on the remaining $300 billion worth of Chinese exports to the US. .if his Chinese counterpart (President Xi) will not meet with him at the G-20 extended family clambake over the weekend of June 28-29 at Osaka, Japan. President Trump went on... "It is me right now that is holding up the deal. And we're going to either do a great deal with China or we're not going to do a deal.

It was the spring of hope, it was the winter of despair

- Charles Dickens (opening lines of "A Tale of Two Cities")

The API version of weekly oil inventories showed another sizable increase on Tuesday evening. WTI Crude futures have responded to the downside overnight. This morning, the industry awaits weekly data on inventories from the Energy Information Administration (EIA), and the expectation had been... for a decline. Every third or fourth week it seems that we do get one of those, but not nearly as often, or nearly similar in magnitude to regular increases in supply that have been piling up.

That same EIA on Tuesday forecast an average price of $2.76 per gallon of gasoline for the summer driving season across the U.S. This is down from the administration's outlook of $2.92 published just one month ago, as well as being down from $2.85 last summer. The EIA also lowered their estimate for an average price for WTI Crude for 2019 to $59 per barrel from $63. How interesting is that? Keep in mind that as recently as April, WTI traded above $66. The last sale that I see in overnight trading is $51.81, and while that's in what some might call a strong dollar environment, the U.S. Dollar Index (DXY) stands at, or near it's lowest levels since March.

This softness in energy pricing, though not good for the oil patch, and certainly a negative for the railroads, will help in two ways. One, the obvious. It's a boost to net income for the struggling family, perhaps even an increase to discretionary spending at a time of year when it's most needed, but usually just not there. Second, there will be a drag on May headline CPI this morning versus core CPI. This number, though most of us know to be more volatile than the core, provides for the Fed the cover necessary if the desire is there, to try to correct the yield curve... and make it look like their idea.

Speaking of forecasts. On Tuesday, semiconductor trade group SEMI revised lower their projections for semiconductor equipment spending for both 2019 and 2020, in their quarterly World Fab Forecast Report. Global spending for this group is now expected to decline 19% for 2019 to $48.4 billion, that's a revision from a previously expected decline of 14%. Growth is expected for 2020, but of 20% to $58.4 billion, revised down from growth of 27%. The memory chip industry would be the primary culprit here as illustrated from the group' news release, but as one might see... much of this damage is limited to H1 2019. 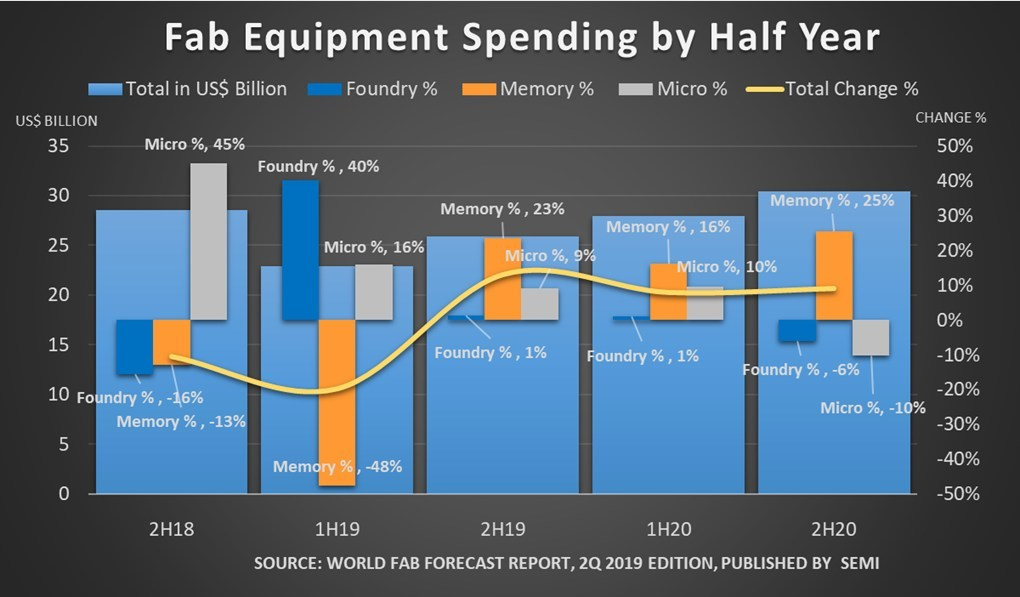 Though headlines across this industry are largely made by names many of you know, such as Lam Research (LRCX) KLA Tencor (KLAC) , and Applied Materials (AMAT) , I find that though somewhat expensive fundamentally, Brooks Automation (BRKS) has not seen the slowing in sales growth that the rest of the group has seen, and now struggles with a potential break-out at a pivot. I'm not in it, but it's on my "watch list" or in my "bullpen". Just a heads up, but take a look at this set-up. 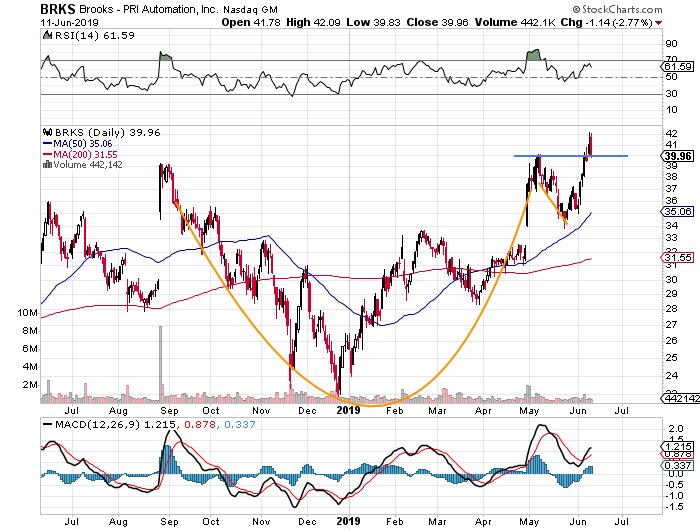 For two days now this stock has failed to break past the peak (blue line) of the right side of the orange cup that then provided a handle with a depth of 15%. I don't know. When I worked on the trading floor, other traders and I used to bounce ideas off of each other. Well, this is our trading floor, and you are my other trader. What do you think?

Hmm. Came across this small cap in my never ending equity finding search for quality. Ever hear of Advanced Emissions Solutions (ADES) ? You may have. They have been around since the early 2000's. This firm is a holding company for a group of subsidiaries that provide emissions solutions to the coal fired power industry as well as to the industrial boiler and cement industries. To tell you the truth, I noticed the chart first, then I noticed that fundamentally. I thought this firm to be in pretty good shape as well. Though the last sale is just a tad too expensive for me to place in the "Stocks Under $10" portfolio that I manage together with my colleague, Chris Versace, I think this name might be geared toward that same kind of investor.

There are some negatives, such as a high debt-load, which may be why the shares trade at 3 times projected earnings. Interestingly though, levered free cash cash flow is negative, margins are not. Sales growth has exploded higher over the past two quarters, as has profitability. In terms of growing the business, and return on equity, this firm has momentum. However, Relative Strength has lagged. There are two possibilities. Either the name is set up for a pop, or I am wrong. Did I mention the 7.7% dividend yield? Is that dividend safe? Tough question, but it might be. At an annual rate of $1.00, the dividend would be 29.5% of the firm's projected 2019 EPS of $3.39. That's well down from where it was in 2018 when the firm kept paying shareholders, and a lot less than it would be if the firm can meet EPS expectations of $4.99 for 2020. 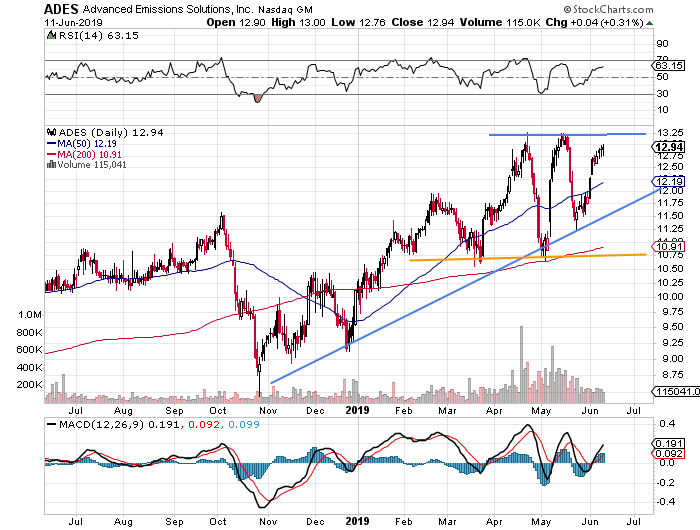 I see an "ascending triangle." That's in blue. Others might see a "Flat Base." (Orange support.) Either way, this name is closing in on a potential pivot that either shows up as resistance for a third time, or opens the door for a move up into the $16 /$17 area. Small potatoes? I have never looked at 23% as small potatoes. I'm probably going to grab a few of these after this article publishes.

Get an email alert each time I write an article for Real Money. Click the "+Follow" next to my byline to this article.
TAGS: Investing | Markets | Options | Stocks | Technical Analysis | Trading | Energy | Semiconductors & Semiconductor Equipment