This is a big move in energy. Watching the Energy Select Sector SPDR Fund (XLE) pop 4% might scare off some traders, but I believe this is the beginning of a move in energy. We have resistance around $34.25, so a retest of $33.50 may be on the table, but we're seeing the first signs of a multi-day reversal trend we last saw two months ago (around July 13th). The end of June brought us similar triggers, which failed, but it wasn't the same. At that point, price was running right into the 50-day simple moving average (SMA) and we were lacking the parabolic stop-and-reverse bullish indicator. This time we have PSAR in favor of the bulls and the 50-day SMA doesn't come into play until $36.24. That's been the Achilles heel of recent rallies. Now, it becomes our upside target. 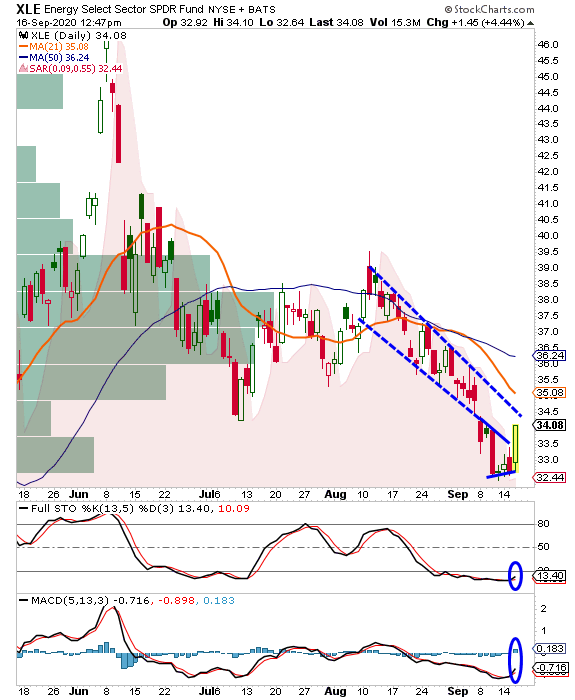 This is one sector I would consider rotating some big tech gains into, assuming you have tech gains.

Another name for consideration here may be Party City (PRTY) . If the world is really coming back from the dead, expect holidays like Halloween, Christmas, and New Year's to be off the hook. Also, expect some parents to throw some "make-up" birthday parties or even graduation events. In short, anticipate some big pent-up demand dollars coming back in sharp fashion. Insiders have been buying shares during August and September and we're seeing it in the chart. 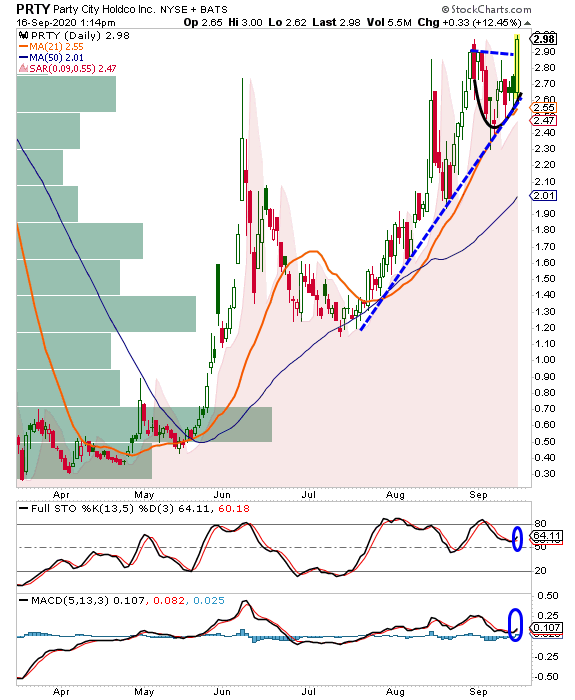 PRTY was at 2020 highs in a hurry today. After a successful retest of the strong bullish trendline dating back to July, we see a breakout from recent resistance. This isn't quite a cup-and-handle pattern, but close to it. The 21-day simple moving average (SMA) has acted as support. We've pushed off that level every day for almost two weeks now. The breakout here points to $3.25, possibly even $3.40, before the upside target is met.

Secondary trend and momentum indicators are crossing bullish. Both Full Stochastics and MACD have flipped. The last time this happened, we saw very big runs higher. This echoes the $3.25 to $3.40 upside targets. The stock does have options with a ton of open interest still sitting in the September $3 calls. That could hamper us in the short-term from a bigger run, so it is something to consider. What I do foresee as a possibility is those calls rolling from September to October if the stock pops above $3 today or tomorrow. I would consider a buy on a pullback to $2.75 or a break over $3.00.

Like other traders, I've pulled myself away from watching Snowflake (SNOW) , but I would be lying if I said the print over $300 didn't bother me a bit. That's all too reminiscent of the dot-com days. We'll have to keep a close eye on the follow-up action over the next several days. A fade back under $200 could be troublesome for the overall market.

Get an email alert each time I write an article for Real Money. Click the "+Follow" next to my byline to this article.
TAGS: IPOs | Investing | Markets | Options | Stocks | Technical Analysis | Trading | Energy | Retail | Software & Services