During the fast-paced Lightning Round of Tuesday's Mad Money program, Jim Cramer was bullish on Enbridge Inc. (ENB) Enbridge is an "energy infrastructure company with strategic business platforms that include an extensive network of crude oil, liquids and natural gas pipelines, regulated natural gas distribution utilities and renewable power generation." Sounds complicated so let's just look at the charts.

In this daily bar chart of ENB, below, we can see that prices have weakened since the beginning of the year. ENB has not made a new low since April but a clear pattern of lower highs can be seen. Prices are trading below the declining 50-day moving average line and the falling 200-day moving average line. The level of trading volume has increased the first half of this month but the daily On-Balance-Volume (OBV) declined to a new low suggesting that sellers have been more aggressive but they had not yet pushed prices to new lows. The Moving Average Convergence Divergence (MACD) oscillator has rolled over to below the zero line for an outright sell signal.

In this weekly bar chart of ENB, below, we can see a long decline in price. This year declines to around the $30 look like they have been bought. Prices are below the flat 40-week moving average line. The weekly OBV line has not made a new low in months. The weekly MACD oscillator is pointed down and below the zero line.

In this Point and Figure chart of ENB, below, we can see a nearby downside price target of $30.12. A rally to $33.93 is needed to really improve this chart. 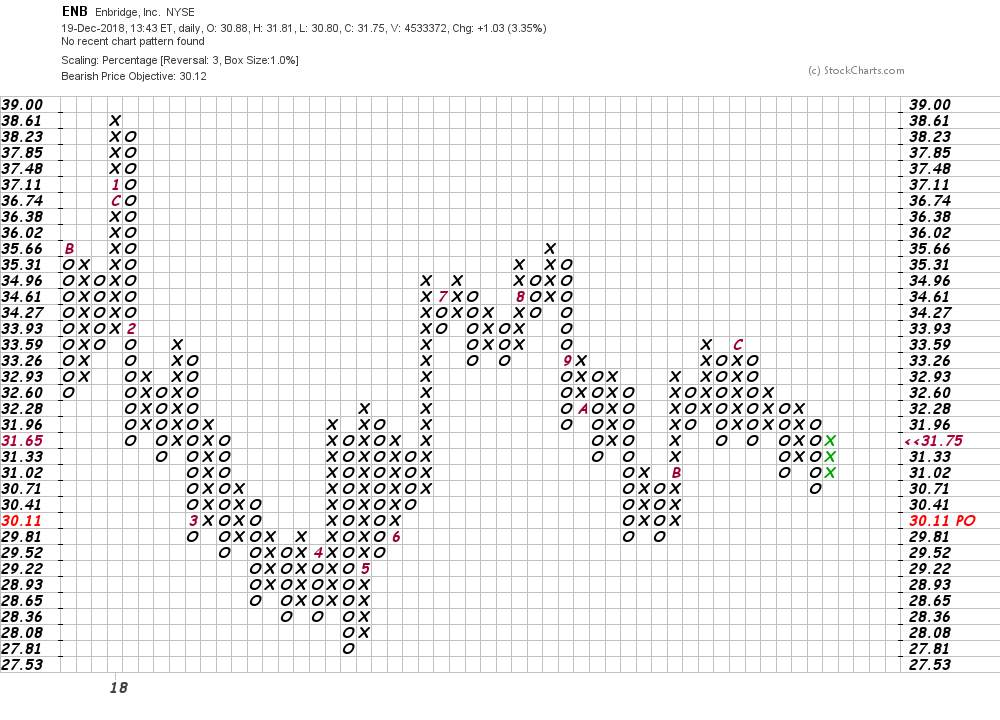 Bottom line strategy: ENB needs to prove itself and close above $34 before I get interested.

Get an email alert each time I write an article for Real Money. Click the "+Follow" next to my byline to this article.
TAGS: Investing | Technical Analysis | Energy