During the Lightning Round in Jim Cramer's "Mad Money" show on Thursday night he responded to a caller - "Emerson is really good. This is a great American industrial." Okay. Let's take a few minutes and look at the charts and indicators of Emerson Electric Co. (EMR) .

In this daily bar chart of EMR, below, we can see an uptrend from last November to early October. There is a clear pattern of higher lows and higher highs but that pattern is disturbed in October and November. In late October the prior July lows are broken and now we have a pattern of lower lows and lower highs. Prices are trading below the declining 50-day moving average line and the bearish 200-day moving average line.

The Moving Average Convergence Divergence (MACD) oscillator crossed to the upside in early November with a cover shorts buy signal.

In this weekly bar chart of EMR, below, we see a mixed picture with the indicators. Yes prices are now below the declining 40-week moving average line which is bearish.

Note, however, the weekly OBV line has continued to rise and even made a new high telling me that buyers of EMR have remained aggressive.

The trend-following MACD oscillator is following the trend lower and is in a take profits sell mode.

In this Point and Figure chart of EMR, below we see only a modest downside price target of $64.29. That doesn't seem terrible but it will mean a new low on the chart and the break of support at $64.78. 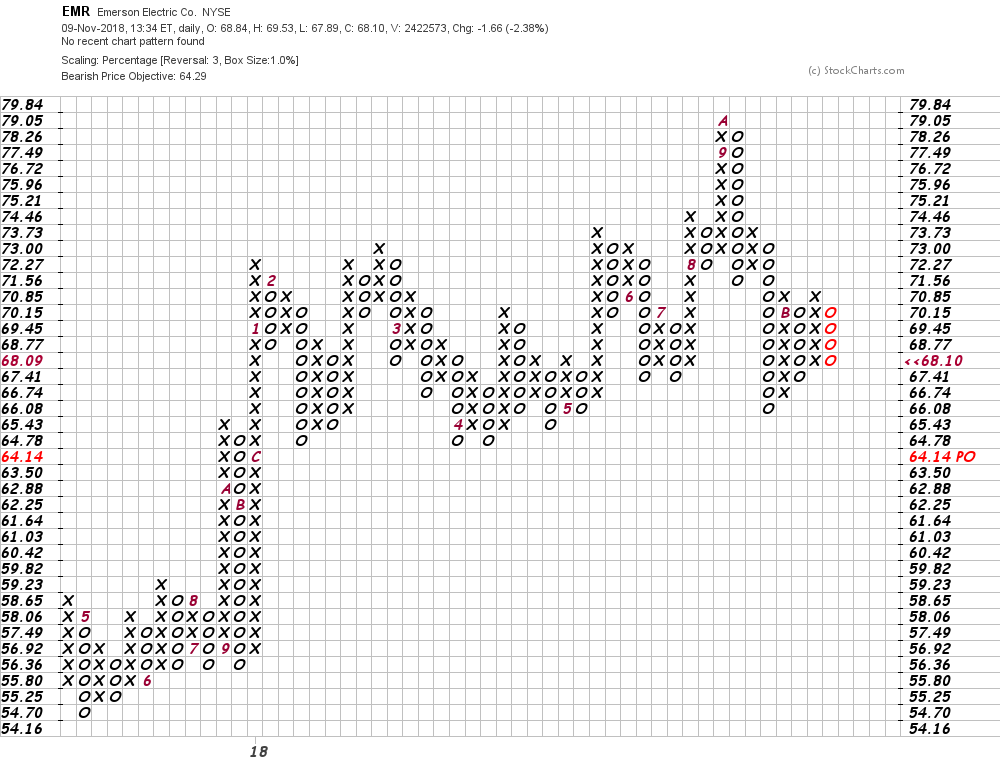 Bottom line strategy: If you are holding EMR in your portfolio you need to pay closer attention as a break below $65 could mean further declines. Strength back above $72 would be positive.