There's a reason they call him, 'The Money Man". Actually, I don't know if "they" actually call him that. I always have. Tesla (TSLA) CEO Elon Musk has always found a way to raise funds when and where there was either a need, or an opportunity. This time, I think it was opportunity that knocked, but I am not the one that has excelled in this name. That would be my son, and a ton of young folks just like him.

I have written on the name more times than I can count. I have traded the name from both sides, though not lately. The best that can be said about my longs is that they were longs. The best that can be said about my shorts would be that every position I create is done so with both a target price as well as a panic point. And when it comes to shorts I usually do have an itchy trigger finger, rarely showing the patience to wait for either.

Tesla, the stock, has not just been a runner, this name has been the runner. The shares have done so in either the toughest or grandest of environments, depending upon one's perspective. Is this an automobile company? An electric battery company? A tech company? All of the above, sprinkled with more than a dash of "cool"? Indeed.

These shares have always defied business fundamentals, building a core of believers as investors that were willing to wait until those fundamentals started to catch up. At this pace, no matter how good or profitable this business is, can the fundamentals catch up? The kid wants to short these shares again. The kid is either not that brave or (hopefully) not that stupid.

On August 11th, the already red hot Tesla announced a 5 for 1 stock split to be executed prior to the opening on August 31st (yesterday). The shares ran 70% in about three weeks (Roughly 200% over three months, 500% YTD). Though not a member of the S&P 500, most investors feel that this inclusion has to be coming in the not too distant future. On Monday, Tesla gained 12.6% just for the day, making the company the seventh largest American firm by market capitalization speeding past Visa (V) on the leader board.

Tuesday morning. Tesla leads the daily parade of headlines. In a filing with the Securities and Exchange Commission, Tesla has disclosed that the firm has entered into an "equity distribution agreement" to raise up to $5 billion by selling an allotment of up to 10 million shares (in the future), which amounts to 1.1% of total shares outstanding. Dilutive, right? Apparently not, remember this is so Tesla can sell more shares if and when it deems that the timing is right.

Investors were looking at it as a positive in the early going prior to the opening bell. The shares, post-split, and pre-opening were trading with a $504 handle, or up more than 1%. All of your favorite sell-side banks/brokers are involved in the deal. Pick a name among Goldman Sachs, BofA Securities, Citigroup, Morgan Stanley, etcetera. Almost any name. I have not seen JP Morgan mentioned in the press clippings.

My feeling is that this name can be traded from either side at these levels, as long as one is not playing with money meant for rent and groceries. The AME can be day-traded. I do not think that the name can be shorted with any kind of conviction even in the face of a parabolic move higher, or at least not ahead of potentially being added to the S&P 500, or ahead of the firm's September 22nd "Battery Day". An addition to the S&P 500 would mandate a significant number of tracking funds to own a certain number of shares relative to the stock's weighting in the index. Then, there's Battery Day, and there is quite a bit of speculation around the event that a major technological breakthrough could be announced. 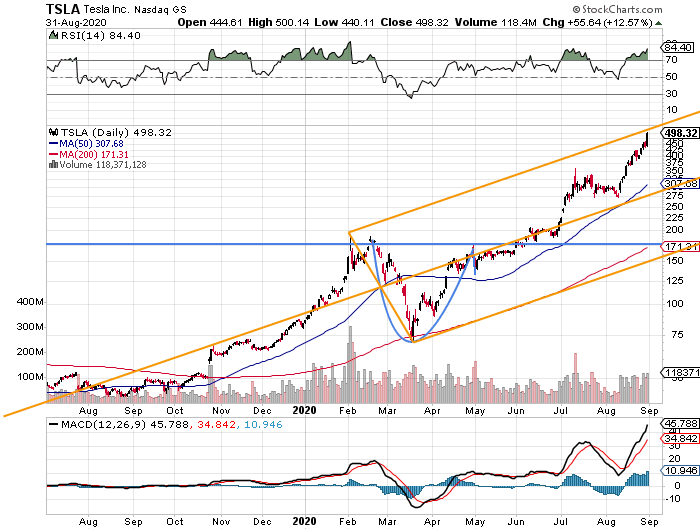 These shares flirt with the top trend line of our Pitchfork this morning. Relative Strength is almost absurd, as is the daily MACD. The stock adjusted for the split, closed on Monday at a 62% premium to its 50 day SMA, and a 191% premium to its 200 day SMA. Every ounce of my being is yelling at me to short these shares.

I can not, unless I keep it to fun-size, but even fun-sized trades can get traders hurt in this name. I will try to sit on my hands. Can I? We'll see.

Get an email alert each time I write an article for Real Money. Click the "+Follow" next to my byline to this article.
TAGS: Investing | Markets | Options | Stocks | Technical Analysis | Trading | Automotive | Elon Musk | Electric Vehicles