Ricks first spoke of Lilly's progress with Donanemab, a treatment for Alzheimer's disease. He said Donanemab could be a game changer. In Phase 2 trials, it has proven to quickly eliminate plaque in the brain that triggers the disease. The one-time treatment can remove plaque that builds up over 20 years and is effective in helping early-stage Alzheimer's patients achieve better outcomes.

In addition to Phase 3 testing, Lilly is also studying whether Donanemab could also be used as a one-time preventative measure for everyone, even before symptoms start.

Ricks was also upbeat on the outlook for Covid-19. He said Lilly's Covid therapies are working against most variants of the disease and overall, vaccines are winning the war. He predicted that by April, the U.S. will have more doses of vaccines than demand.

Let's check out the charts and indicators to round out the analysis.

In this daily bar chart of LLY, below, we can see that prices have sprinted higher from early November. LLY has been correcting sideways to lower since late January. Prices are still above the rising 50-day and the rising 200-day moving average lines. The trading volume was heavy in January and has diminished so far this month. This suggests there may be a fair amount of new longs at a high price.

The On-Balance-Volume (OBV) line has weakened since late January telling us that sellers of LLY have been more aggressive.

The Moving Average Convergence Divergence (MACD) oscillator crossed to the downside in late January for a take profit sell signal. The indicator is pointed down but still above the zero line.

In this weekly Japanese candlestick chart of LLY, below, we can see in late January a weekly long-legged doji pattern (top reversal) followed by confirmation (a red real body) the following week.

The 40-week moving average line is still positive but the OBV line has begun to weaken and the MACD oscillator has been narrowing.

In this daily Point and Figure chart of LLY, below, we can see a potential downside price target in the $174 area. This is a partial filling of the price gap on the daily bar chart. The entire gap could get filled. 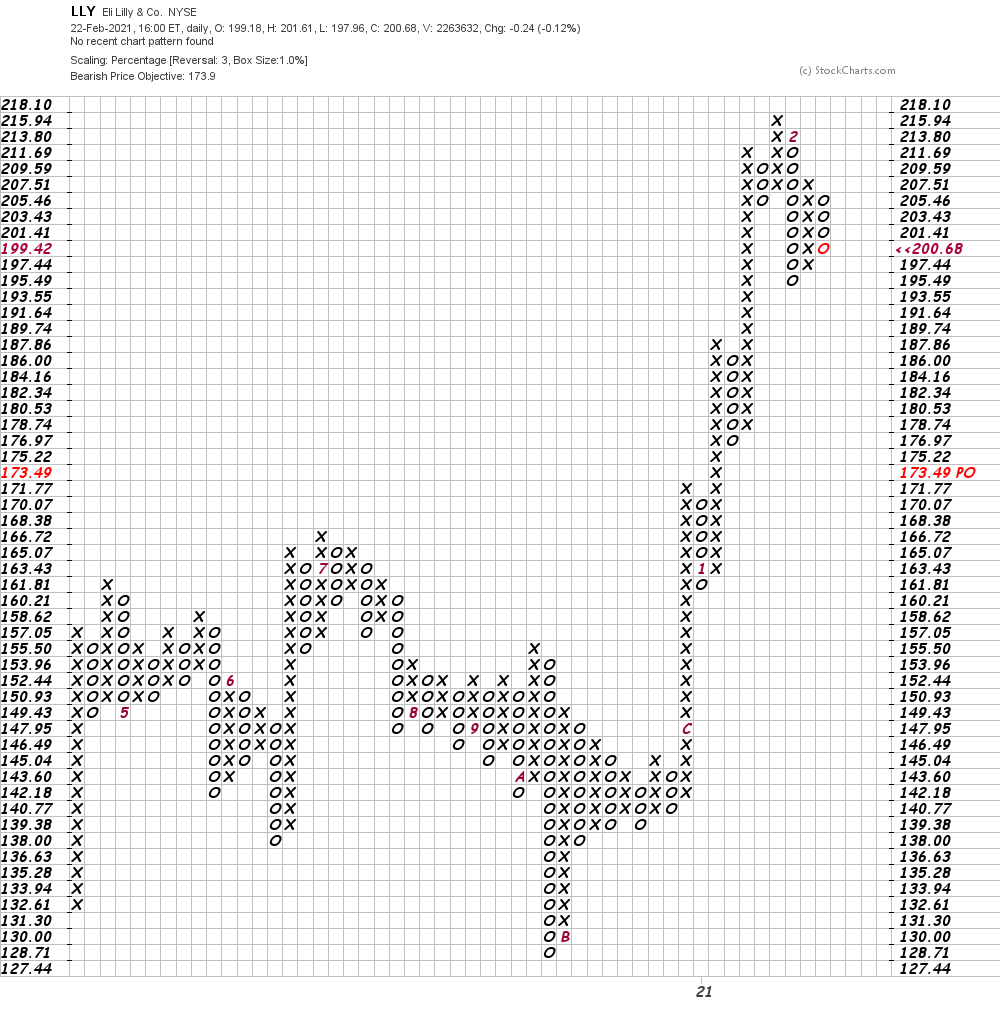 In this second Point and Figure chart of LLY, below, we used weekly close only price data. Here the software shows the $357 area as a potential longer-term price target.

Bottom line strategy: If you have no patience to sit through a correction of a really unknown proportion and timing I would take your profits and sit this out for several weeks. Longer-term, LLY's new drug could be a huge blockbuster. We'll see.

Get an email alert each time I write an article for Real Money. Click the "+Follow" next to my byline to this article.
TAGS: Drug Approvals | Investing | Stocks | Technical Analysis | Trading | Healthcare | Pharmaceuticals | Mad Money | Executive Interview